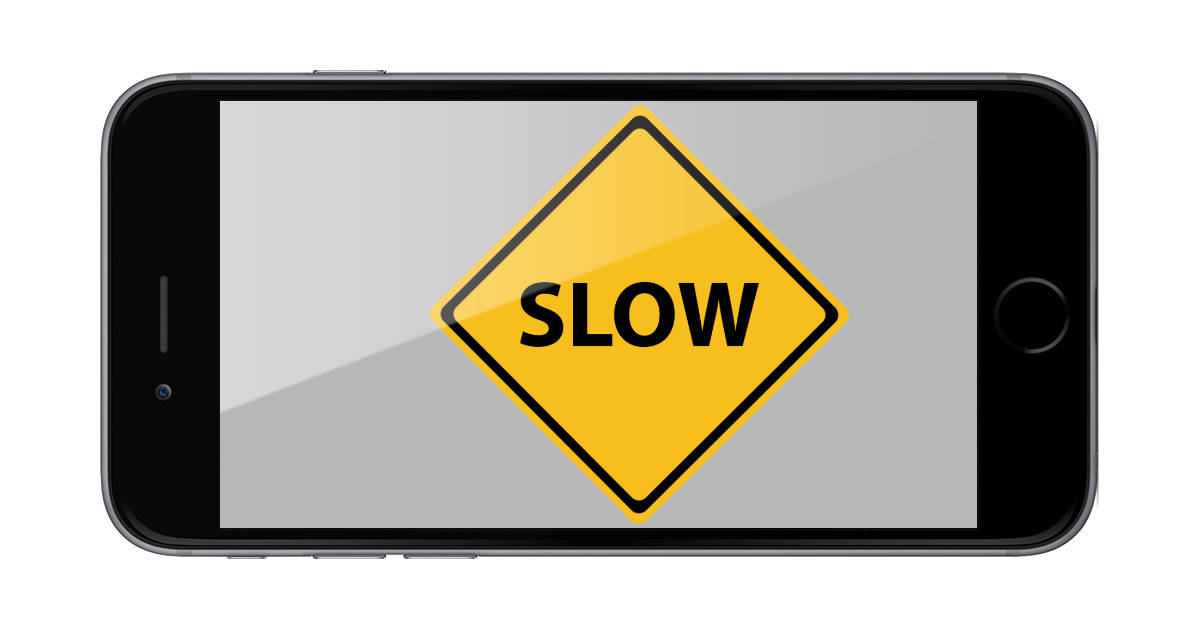 If your old iPhone doesn’t feel as snappy as it used to it’s probably because Apple is intentionally slowing it down. There’s a good reason for that, and it isn’t to trick you into buying a new iPhone.

The reason, Apple says, is to prevent iPhones with older batteries from randomly shutting down. Apple said in a statement to TechCrunch,

Our goal is to deliver the best experience for customers, which includes overall performance and prolonging the life of their devices. Lithium-ion batteries become less capable of supplying peak current demands when in cold conditions, have a low battery charge or as they age over time, which can result in the device unexpectedly shutting down to protect its electronic components.

Apple’s statement comes in response to a wave of complaints on Reddit about older iPhones being “throttled,” or intentionally slowed down. Those complaints were followed up by John Poole from Primate Labs posting benchmarks showing a lower than expected performance on iPhones with older batteries.

Turns out those processor power peaks put too much of a strain on older batteries that no longer hold a full charge and the iPhones were shutting off. Apple’s fix for the problem was to distribute the power demand over multiple processor cycles to reduce the battery strain. The end result is that iPhones with older batteries don’t randomly shut off, but they do run a little slower.

Apple could’ve been more open about what was happening instead of letting this turn into a Reddit frenzy. That said, some people would assume Apple made up a plausible excuse to cover how it’s trying to trick people into buying new iPhones.

The reality is it would be incredibly stupid for Apple to throttle performance on older iPhones to trick people into buying this year’s model. That’s the kind of deceptive practice that lands a company in the middle of a Federal investigation along with a bucket full of lawsuits.

Demanding Apple give us a setting so we can choose if performance degrades as the battery ages isn’t a good idea—although plenty of iPhone owners would love that option. Preventing the processor power peaks is about more than avoiding random shutdowns. It also helps prevent damage to other components along with minimizing additional battery strain.

So yes, Apple is reducing performance on some iPhones, but not because they’re old; it’s because their battery is worn out.

[Updated with additional information about which iPhone models are affected]

BULL CRAP. This is purely because Apple 1. doesn’t want to pay for warranty repairs and 2. because Apple wants everyone to give them more money every two years. They want the iPhone to be a “subscription service”. This is a deceptive an immoral practice. Would have expected that of Samsung, but not a company that portrays itself as altruistic and above board.

There should be a setting, with a slider, more battery life <—> more performance

And it should be adaptive so it knows when it’s plugged in and charging vs only battery (just like how when we had a headphone jack, volume adjusted based on whether or not it was in use)

Either way you look at it, it’s another example of either HORRIBLE battery management in iPhones OR deliberate strategy to get you to upgrade every 2 years-which is apparently the general consensus around the globe despite Apple’s lies. What about external batteries? Heck, Tesla makes external batteries for iOS devices but NOOOO Apple will CRIPPLE my functionality anyway because they don’t know how batteries work, nice. Thankfully LG still makes a bunch of phones with removable batteries, you might get one free if you buy that (LG) Bolt. d:D

I agree with Jamie.
To take it a step further, if this is happening to a phone that is under a warranty, Apple should notify the user and offer a battery replacement, instead of slowing down your phone. I’m not sure if the OS is aware of warranty status or not though.. so at least notifying the user that a degraded battery has been detected would be a start.
Also, I’d like to se them reduce the price of the battery replacements to alleviate some of the outrage around them doing this without disclosure in the first place.

Agreed. A pop-up warning for the user indicating something along the following lines would help. Apple just needs to communicate more / better:

“Your battery has just completed its 500th charging cycle and, to maintain peak performance, needs to be replaced. Your battery is designed to retain up to 80% of its original capacity at 500 complete charge cycles. Your warranty covers a defective battery, but it doesn’t cover battery wear from normal use. For your convenience, your device will continue operating at reduced processor speeds until replacement can be performed.”

There is no indication it is that binary. Think of it more like your phone dropping to a lower clock speed because it is overheating. If your battery is fully charged it might still crank at full speed but as the power unit start’s having issues getting enough power it throttles down. I don’t think it goes into crappy battery mode after x charges, It is more like if the battery is weak and it is in cold weather and it is under 25% charge it throttles down.

I would agree with you guys but for the fact that this is happening on phones just over a year old. The fix should be for Apple to make it easier to get a battery replacement (which by all accounts does resolve the issue) rather than having to buy a new phone every year. This one can’t be spinned, for me anyway. They are dropping the ball all over the place this year.

It is wrong to say easier, and instead maybe cheaper?
It is plenty easy to replace your battery. Just take your phone to and apple authorized store and have it replaced for $80.
Maybe if that were $50 people would be less concerned? but it is not hard!

Haha! Lee. I turn 69 before the year is out. I hope that I just don’t shut down. As for my iPhone 6; it still is working well – old battery and all.

The whole meme of “Apple slows down older phones to get you to buy a new one” is total click bait. Batteries age and get worn out. Ask anyone that has a re-chargeable power tool if they have the same performance several years in as they did when they used it right out of the box. Answer is; they don’t. The choice between having my iPhone run a little slower or just shut off is a no brain-er.

There’s a good reason for that, and it isn’t to trick you into buying a new iPhone.

That fact isn’t stopping the pundits from criticizing Apple and demanding that the batteries be replaced for for free. My 15 year old truck isn’t performing as well as it once did, neither is my 67 year old body, but I am not demanding that Ford replace the engine.