Politics and technology may have intersected yet again on Monday, as former U.S. Vice President and current Apple board member Al Gore met with President-Elect Donald Trump. Mr. Gore acknowledged the meeting outside of Trump Tower, but here are four topics most likely to have been on the agenda. 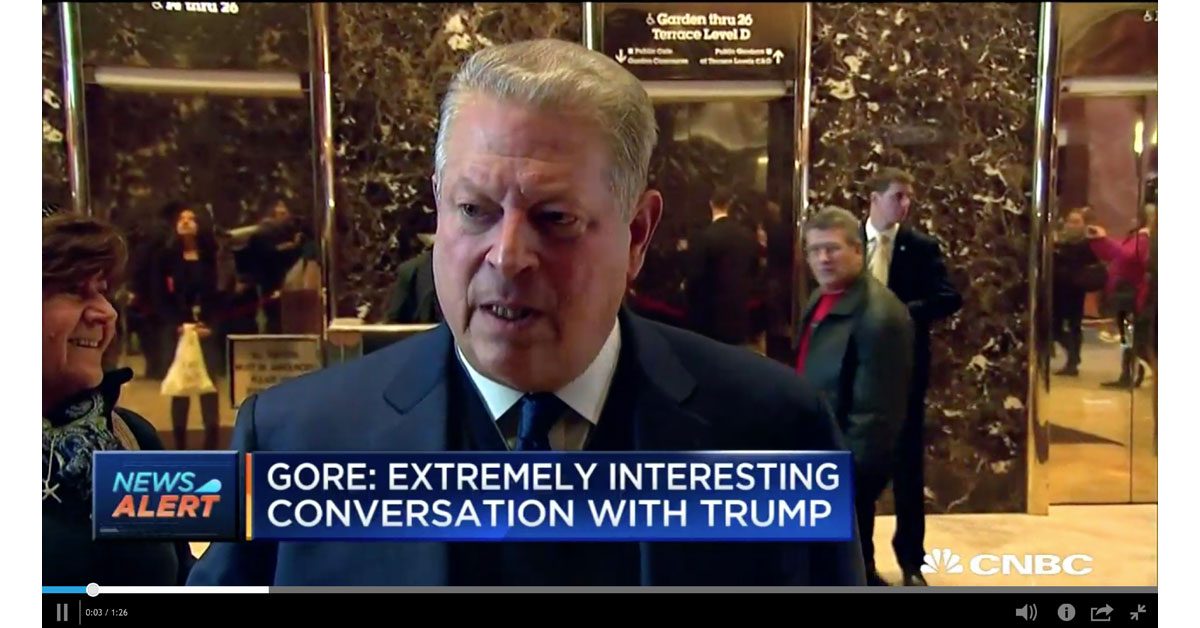 Al Gore on CNBC after meeting with Donald Trump

Mr. Gore told CNBC, “It was a sincere search for areas of common ground. I found it an extremely interesting conversation, and to be continued, and I’m just going to leave it at that.” There’s a Flash-based video on CNBC’s site if you’d care to watch it.

That said, Mr. Gore’s two primary areas of concern in the political and business spaces are climate change and Apple’s business. Mr. Trump is a climate change denier who labeled it a Chinese hoax—it’s frankly doubtful that would been the focus of their meeting. More on that below.

Apple’s interest in government, however, include in part U.S. tax policy, especially policy regarding profits generated overseas, as well as domestic factories, and end-user encryption. Occam’s razor says it was one of these areas that would formed the foundation of any discussion between the two.

Al Gore joined Apple’s board of directors in 2003 at the invitation of Steve Jobs. At the time, his selection was seen as a political move by Apple, or maybe even Steve Jobs throwing him a bone* in the wake of the 2000 election. Another theory at the time was Mr. Gore would help Apple beef up its lobbying efforts.

Over the years, however, it became clear that Mr. Gore’s primary area of influence has been Apple’s carbon footprint. Apple CEO Tim Cook greatly cares about that footprint and leaving the planet better than he and his company found it. But one way or another, Apple has made enormous strides in reducing its carbon footprint since Al Gore joined the company’s board.

Transparency reports, clean water initiatives, reducing the use of hazardous chemicals, sourcing conflict-free rare earths, and recycling are all areas where Apple leads the electronics industry. Mr. Gore has never taken credit for those things, but there’s little doubt in my mind he played a major role in those initiatives.

Steve Jobs infamously said American manufacturing jobs aren’t coming back to the U.S. Tim Cook has echoed those thoughts. But, Apple did open a factory in Austin to build Mac Pros, and the company tried to open a sapphire production facility in Arizona. In the year’s since, Tim Cook has expressed interest in doing more manufacturing in the U.S.

This is one area where Al Gore and Donald Trump could have had a lot to say to one another. Any president would love to be able to say they got Apple to open a factory in the U.S. (whether or not they played a role in that), and it’s possible that Apple would be interested in federal help to do it.

Apple, Encryption, and the U.S.

Donald Trump blasted Apple for not unlocking an iPhone used by dead terrorist Syed Farook. More specifically, Mr. Trump called on Americans to boycott Apple. In the end, encryption and security didn’t play much of a role in this election, but Mr. Trump has been fairly consistent about supporting law enforcement access to devices and data regardless of the consequences.

It’s possible Al Gore and Mr. Trump might have spoken on this topic, but I don’t consider it likely. For one thing, it’s not an area that’s at the top of anyone’s agenda at the moment.

For another, end-use encryption isn’t the kind of thing one makes a deal to solve. The business-related meetings we know about Mr. Trump conducting as President-Elect so far have been almost exclusively meetings to swing deals.

Lastly, though Mr. Gore was a tech-savvy politician, he hasn’t been known to be involved in the bigger encryption fight of recent years.

Put those things together, and I can’t imaging encryption was what they talked about.

The topic most likely at the heart of any discussion between Al Gore and Donald Trump would be U.S. tax policy, especially policy governing offshore profits. Apple has more than $181 billion in profits generated outside the U.S.

Under current U.S. law, Apple owes income tax on those profits, but doesn’t have to pay it until it actually brings the money to the U.S. Apple and many other companies—especially rich tech giants—routinely keep that money overseas waiting for a tax holiday or other change in U.S. policy.

Donald Trump’s has proposed a tax holiday that would subject foreign-earned profits to a 10% one-time tax, down from 35%. Thereafter, his proposal would peg the corporate tax rate at 15%.

Tim Cook told the U.S. Senate that Apple follows the law in its tax practices, and that if said Senate wanted Apple to behave differently, it should change the law. Donald Trump’s proposed tax plan is one way that law could be changed, and it’s definitely something he and Mr. Gore might have discussed.

It’s hard to imagine how any conversation under those circumstances could be “extremely interesting” to Al Gore, but it’s certainly possible.

As it is, the meeting wasn’t even planned. According to CNBC, Mr. Gore was originally scheduled to meet only with Ivanka Trump. And to be fair, their discussion was specifically slated to be about climate change issues.

The meeting with Ivanka Trump’s father was either impromptu or happenstance, and the reality is that we saw far stranger things during the election than Al Gore and Donald Trump chatting about the environment.

If we learned anything from that election, it should be that anything is possible.

*By people who apparently knew little about Steve Jobs, because he wasn’t known to throw bones to anyone.

If we are lucky Mr. Gore will be kept 3,000 miles away from DC’s political swamp.

Secretary of State, if we are lucky.

Trump asked Gore if he would be the head of the EPA.
Gore said no, once he stopped laughing hysterically.
Like you said, anything’s possible.