A Sensor Tower report found U.S. iPhone customers spend more on apps and in-app purchases than other platforms. According to the report, App Store revenue for 2016 hit an average of $40 per active iPhone. This is an increase from $35 in 2015, but at the same time, average downloads decreased.

The Most Popular Category

Entertainment also saw a 130% increase in revenues in 2016. Apps that contributed to this growth include video apps like HBO Now, Hulu and Netflix. 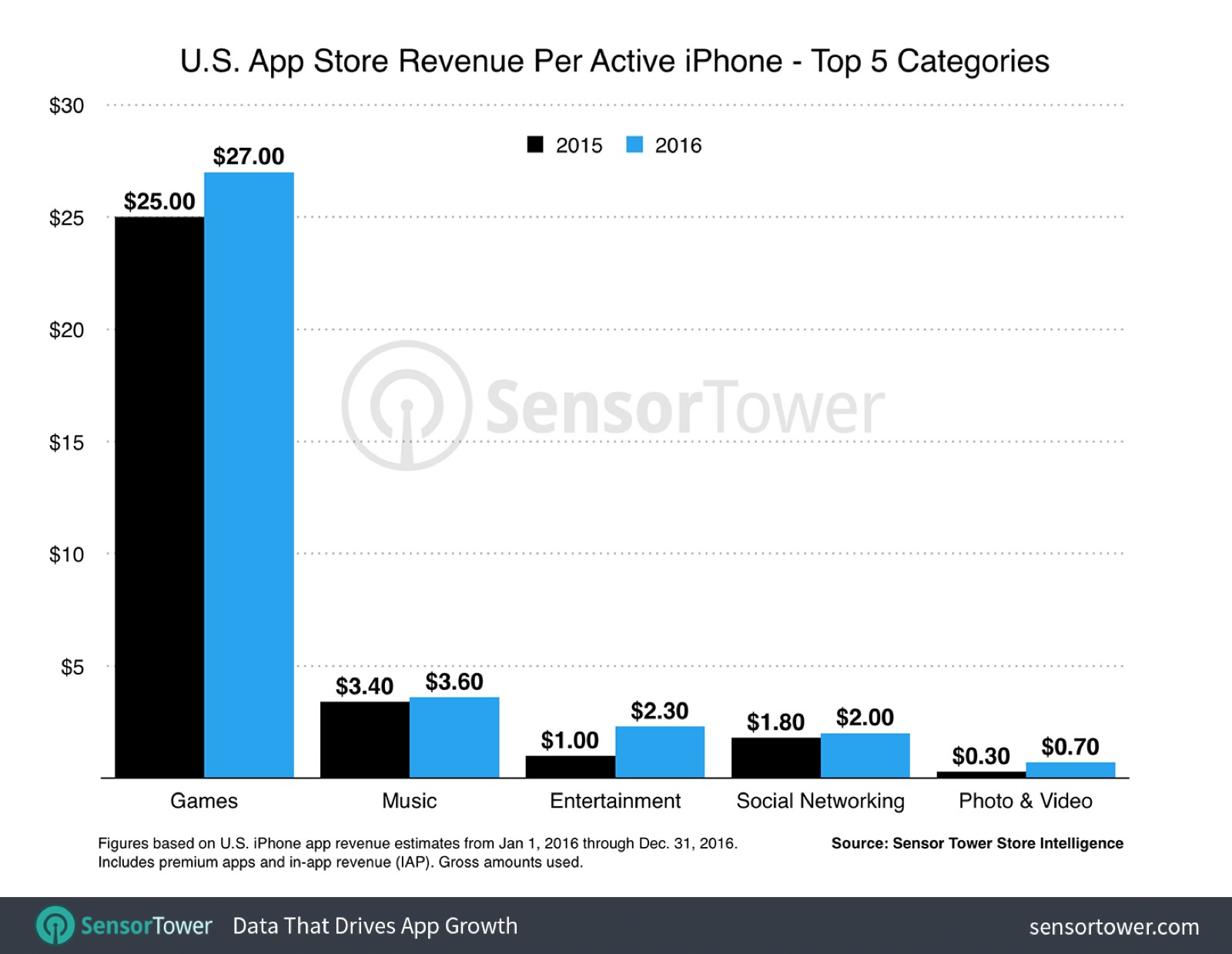 The interesting thing is that even while revenues increase, the average number of app downloads per iPhone actually decreased. Downloads-per-user dropped from 35 in 2015 to 33 in 2016. Although gaming apps remain popular in terms of revenue, per-device installations of games still dropped. Social networking apps also declined, but other app categories saw no difference.

Some Food for Thought

It’s interesting that iPhone owners might spend $100 or more every month to own and use an iPhone, but spend only $40 per year on the software that makes it useful and fun. And many of us complain about spending even that, or balk if the price of an app is more than a nickel ninety-five. That, frankly, is a bit of cognitive dissonance, but your mileage is likely to vary.

The fact that downloads-per-user are decreasing is also concerning because it’s likely that money is being concentrated into the hands of fewer developers. That’s great for those developers finding success, but it makes it ever-harder for new developers to enter the market and make a living from making great software for us.

This is a perennial issue for every platform—and the reality is that iOS and the App Store is hands down the best mobile platform for developers to try and make a living. Still, we’d love to see downloads and revenues increase. Not for Apple’s bottom line—which is already astronomically fantastic—but to ensure a healthy developer ecosystem.

It’s interesting that iPhone owners might spend $100 or more every month to own and use an iPhone, but spend only $40 per year on the software that makes it useful and fun.

Is that just iPhone users, or all smart phone users? Anyway, I generally go for the paid version of the software so that I get more features and no nag screens, though too many developers also do the later.