In the weeks since his inauguration, there has been much discussion about President Trump’s relationship with the media. Rightly so. Media is not alone in feeling the affects of the chaotic political climate that we are currently experiencing. The ramifications are also clear in tech, where companies have struggled to balance politics and business, even as the two intersect one another like never before. 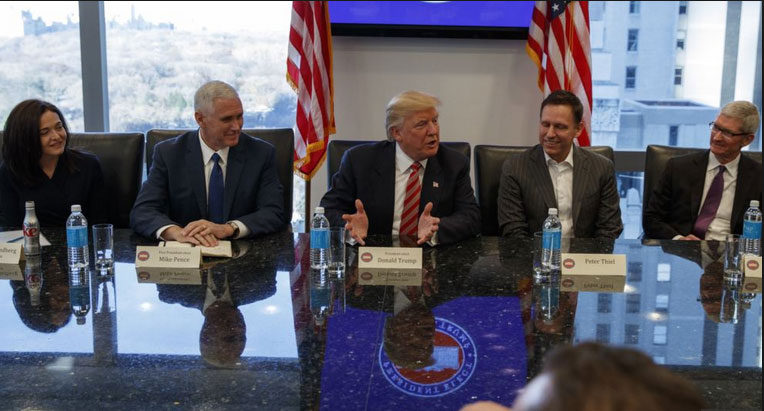 Silicon Valley and the Travel Ban

A number of leading figures in Silicon Valley, including Apple CEO Tim Cook, voiced their dislike of Trump’s travel ban against people from seven muslim-majority countries.

In an email to Apple staff obtained by Recode back in January, Mr. Cook said: “Apple would not exist without immigration, let alone thrive and innovate the way we do. I’ve heard from many of you who are deeply concerned about the executive order issued yesterday restricting immigration from seven Muslim-majority countries. I share your concerns. It is not a policy we support.”

Speaking at Glasgow University a couple of weeks later, Cook quoted one his idols, Martin Luther King. He seemed to be urging others to speak out. “Dr King said something so incredible, it wouldn’t be the actions of people that would be the problem, it would be the appalling silence of the good people. I think that’s a lesson to all of us. If we stand and say nothing, it’s as if we agree. We become a part of it,” Cook said.

You can add into this difficult mix the possibility that US Customs may begin asking foreigners for the passwords to their social media accounts as part of a new vetting process. Appearing before House Committee on Homeland Security, new Secretary of Homeland Security John Kelly said: “We want to get on their social media, with passwords: What do you do, what do you say? If they don’t want to cooperate then you don’t come in.”

Data privacy, even in cases relating to terrorism, is something that Apple has fought previous US governments on. It’s also a subject that both interests liberal-leaning Silicon Valley and has the potential for harming business for U.S. tech companies.

Apple, then, is something of an outlier among many major corporations. It has a history of speaking out on a variety of political and social issues. For many, owning Apple products is arguably as much about expressing a set of values as it is owning a phone or a laptop. After-all, this is the company that always pitched itself as the anti-establishment rebels with that advert.

The company is also big enough that it has some cover. It’s not likely any President would do anything that really threatens Apple in any major way.

Other companies, though, are in a more difficult position. They are trying to maintain lines of communication with an administration many—but not all—oppose. Senior Valley figures have been pictured in meetings with the new President, as shown in the photo above. Access to any president is important for business, and this hasn’t changed just because there’s a new president. At the same time, though, a revamped Executive Order on immigration on its way. That’s likely to raise a ruckus from Silicon Valley again.

All of which speaks to the difficulty Apple and the rest of the tech world are having and will continue to have in navigating the new waters of Donald Trump’s presidency.

Thanks skipaq Yea, it was illuminating to drop in another scenario that used his same logic. I love the guy. And since he’s not dumb, we can understand his decision is not based on truly wanting people to come and go as they please. Maybe it’s some combo of cheap labor, ingratiating Apple with the media, and so on. But it’s not from a place of being logical. And yes – of course, the Apple campus will probably soon be a sanctuary safe zone where all Apple lovers AND haters can meet. If people show up and want to burn… Read more »

Irony makes good points, jack. I also heard that the new Apple spaceship campus will be a sanctuary safe zone for Apple haters.

I presume Tim Cook is going to make changes at Apple to reflect what he wants for America. DO AWAY WITH JOB APPLICATIONS No more “applying” to work at Apple. Just walk in and start working. If someone challenges you, simply tell them you are an “undocumented Apple employee.” NO FIRE WALLS Enough is enough with walls, physical or otherwise. Trump has shown us that walls are bad. They keep too many GOOD people out. So Tim Cook will probably order all firewalls removed from Apple systems. EVERYBODY WILL PROBABLY BE INVITED TO APPLE EVENTS No more “invitation only.” If… Read more »

Personally I don’t think Apple, or the rest of the US will have to worry that much about Trump. Pence is going around looking very ‘presidential’. His recent trip to speak to the EU for example. The Republicans in Congress appear to me to be in a ‘give him enough rope’ mode. Soon, possibly sooner than anyone expects, Trump will clearly cross the line. Then there are enough members of Congress on both sides of the aisle, to impeach his ass. The Democrats want a Republican Party in turmoil. The Republicans like the idea of Presdient Pence looking almost rational… Read more »