Apple is very much into solar power. The company has made a commitment to clean energy and has been building solar power plants both in the U.S. and China. I’ve looked into Apple’s efforts with solar energy and its many new installations. I want to put what Apple is doing in perspective with some numbers. 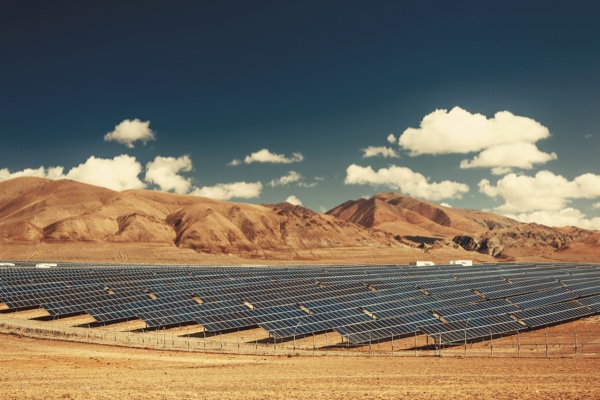 The recent news item that triggered my research into Apple and solar power was this announcement from NV Energy, Inc.

NV Energy and Apple announced today [Jan 25] they have reached an agreement to build 200 megawatts of additional solar energy in Nevada by early 2019. The projects will support Apple’s renewable energy needs for its Reno data center.

That number, 200 MW (megawatts), caught my eye, because that’s a pretty good-sized solar energy plant. The physicist in me started thinking about the numbers.

First, commercial solar power plants tend to be somewhat smaller than coal or nuclear plants. They range in size from about 10- 13 MW to 280 MW. By contrast….

Nuclear power plants, of which the U.S. has 61 sites, tend to be about the same size as coal plants. That is, each reactor. Some sites have multiple reactors.

One solar plant that particularly intrigues me, one done in partnership with the U.S. Department of Energy, is the Crescent Dunes power plant near Tonopah, Nevada. Instead of photovoltaic cells (PV), it uses heliostats (moving, aluminum mirrors that follow the sun), to focus sunlight onto a 640 ft (195 m) tower and heat salt to molten. The environmentally friendly molten salt can be stored and can generate steam and electricity even when the sun is down. Its power capacity is 110 MW. 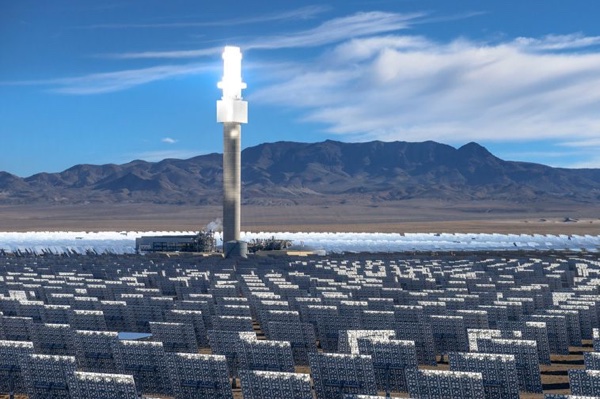 How Many Plants Does Apple Have?

A quick check of Google shows that Apple has or is building many solar power plants. It’s doing this by itself in some cases or in concert with local power companies that have expertise in solar power. Here’s what I found in a casual search. No one website lists them all that I could find. But Apple notes that a total of 4 GW of capacity are in the planning stages.

*indicates planned or under construction. 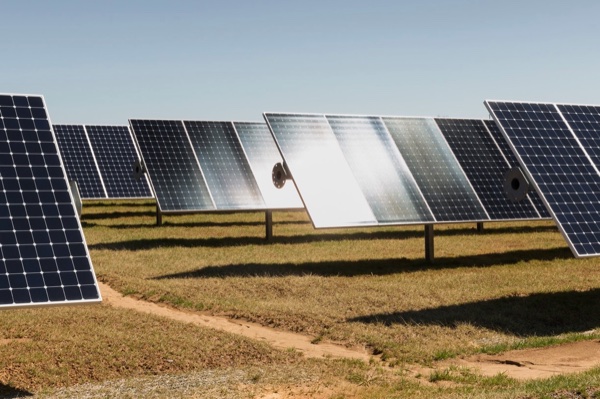 Apple: “Our 4 gigawatts of clean energy projects around the world will avoid more than 30 million metric tons of carbon pollution by 2020. That’s the equivalent of taking more than 6 million cars off the road for one year.”

A very good summary of Apple’s ambitious plans can be found here: “How Apple’s Solar Strategy Evolved.” What may not be well known is Apple’s work with China. From Apple’s website:

We’re building 200 megawatts of solar in China, starting with a 170-megawatt solar project in Inner Mongolia, to begin offsetting our manufacturing emissions. We’re also working with suppliers to install more than 4 gigawatts of new clean energy worldwide, including 2 gigawatts in China by 2020. And over the next two years, Foxconn will install 400 megawatts of solar to cover the energy use of its iPhone final production facility in Zhengzhou.

Let There Be Light

Apple is doing an amazing job of doing its part to provide clean, renewable energy for its own corporate and data center needs as well as, in some cases, the community. What it doesn’t use for itself, it will sell on the open market.

How the new administration approaches renewable energy, especially solar power, remains to be seen. But concerns are being expressed. No doubt, Apple’s commitment to solar power technology both in the U.S. and China has—and and will again—come up in discussions with the new U.S. president.

Let us not forget the small solar systems. Over parking lots, on roofs of homes and larger buildings. Up the street is portable unit that is sitting on parking lot and looks like it can charge two vehicles.

I should add that even though coal plants release more radiation to the environment than nuclear plants, the amount is still low – since we’re dealing with facts here.

Hey John – nice article. A few additional points: 1. Don’t forget Al Gore sits on Apple’s board – and he’s an effective advocate for these moves and Apple’s broader commitment to renewable energy. 2. Most people don’t know that coal plants produce LOTS of (mostly unregulated) radioactive waste – no that’s not a typo – and release 10x more radiation into the environment than a comparably-sized nuclear power plant. https://www.scientificamerican.com/article/coal-ash-is-more-radioactive-than-nuclear-waste/ 3. While solar PV and wind energy have had a marginal impact on the coal industry, the primary cause for the decline of this industry (and the coal mining… Read more »

ibuck: I saw acreage figures for many of the solar sites, but in an article this short, I thought it important to avoid too many site details and focus on the megawatts of the various kinds of power plants. That was interesting to me.

Indeed, one has to weigh the land footprint against the carbon footprint.

When you talked about size of the power plant, my first thought was of acres of land used. So I was a little bit disappointed that you were only referring to generated output. Which is fine, and in line with the thrust of your post. But still I mused about the land used. Though coal power plants are probably smaller than solar farms, that coal plant footprint should include the size of the hole in the ground called a coal mine (as well as lots of environmental damage for miles and miles). One often sees solar panels on the ground… Read more »