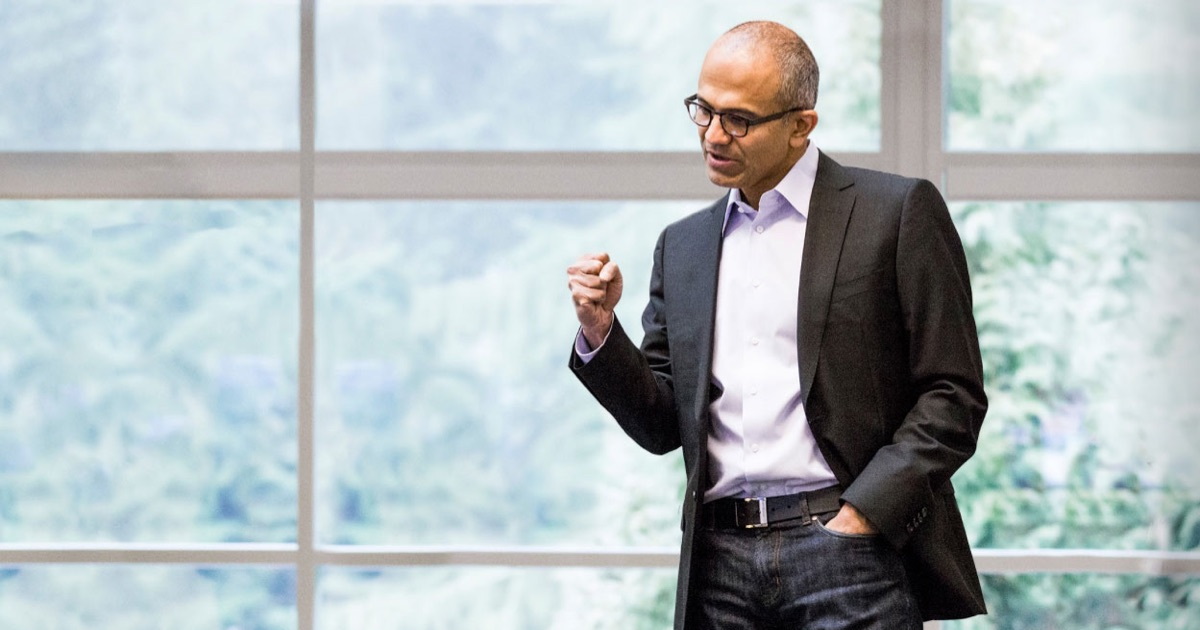 On February 4th, 2014, Satya Nadella, already a long-time Microsoft senior executive, took over as only Microsoft’s third CEO in its history. 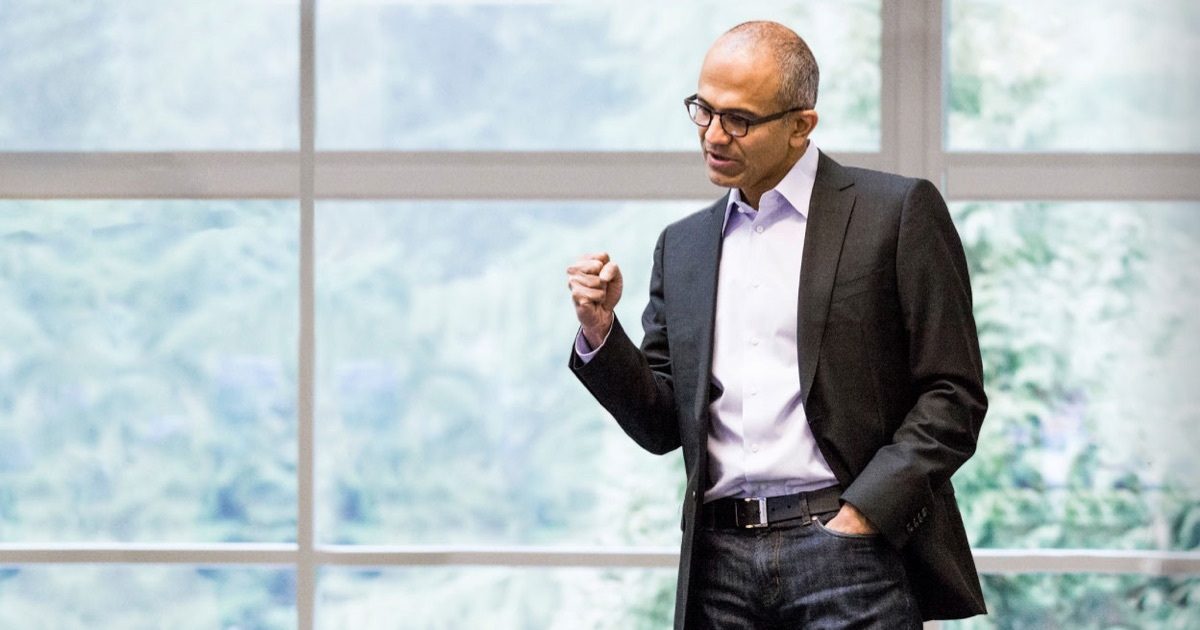 In contrast to the avuncular, intellectual co-founder Bill Gates and the bombastic Steve Ballmer, Satya Nadella possesses a strong technial background with experience in servers, distributed computing, Bing and Azure. Right away, he brought his 20+ year experience at Microsoft to bear thinking about how to understand the soul of Microsoft and better lead the company.

My own writings about Mr. Nadella since 2014 have been very positive. Right away, I recognized that this new CEO was changing the face of the company, making new kinds of decisions and exerting a special kind of technical and human leadership.

In February of 2015, I wrote: “How Apple’s Resurgence Led to Microsoft’s Newfound Success.” There, I wrote:

I like a lot about Microsoft today. It’s fierce legal fight for the privacy of its users is a breath of fresh air. The technical vision of Mr. Nadella has left the obsessive, destructive past of Steven Sinofsky’s “Windows Everywhere” behind. Over the past year, Microsoft has found its sense of proportion and direction.

This year, I continued my very positive observations in: “A Glimpse Into Microsoft’s Future.”

One of the very first things CEO Nadella did was to recognize that whether desktop or mobile, whether Linux, macOS or Windows, customers have characteristic needs for productivity and communication tools. And so, he released the completed (but withheld) Microsoft Office for iPad in March of 2014.  Soon we learned of the Ubuntu shell in Windows 10. Joy ensued.

I won’t recount all the changes CEO Nadella has made, but one that punctuates the new spirit of Microsoft is the Surface Studio announced in October of 2016. It appears to have stunned Apple, and amongst observers, I wasn’t alone in my admiration for Microsoft’s new, gutsy, customer-oriented approach to technology. “Microsoft Just Announced the iPad I Always Wanted – Surface Studio.” 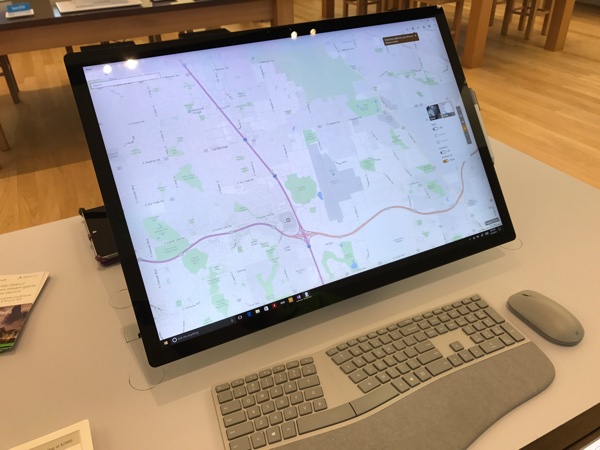 All of a sudden, it looked like Microsoft was the company in search of our hearts. even as the poor Mac was languishing, neglected. Apple has had to scramble to recover. More Microsoft surprises may await. 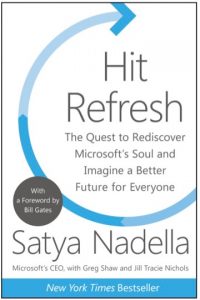 A few weeks ago, one of my readers sent me a copy (iBooks) of Mr. Nadella’s new book “Hit Refresh.” There, Mr. Nadella tells the story of his career, his ascendancy to the CEO job, and the values and experiences he has brought to bear in his new leadership role. I devoured it with joy as I discovered, from page to page, the character of the man who was making all these changes that I so admired and had been writing about.

At the outset, Mr. Nadella talks about leadership and listening to the customers. From Chapter 2, on leadership:

Leadership means making choices and then rallying the team around those choices.” …

A leader must see the external opportunities and the internal capability and culture—and all of the connections among them—and respond to them before they become obvious parts of the conventional wisdom. It’s an art form, not a science.

In Chapter 3, author Nadella recounts how he started from square one to rediscover the soul of Microsoft. The company had grown up and prospered with Windows and Office, but the modern evolution of mobility and the internet, combined with the abject failure of Windows Phone and Windows 8, showed that new customer needs and new technologies required his company to figure out what kind of company Microsoft wanted to be in the 21st century.

Along the way, author Nadella reveals that he’s an admirer of the most basic principles of modern technology and design.

Steve Jobs understood what the soul of a company is. He once said that ‘design is the fundamental soul of a man-made creation that ends up expressing itself in successive outer layers of the product or service.’ I agree. Apple will always remain true to its soul as long as its inner voice, its motivation, is about great design for consumer products.

As the new CEO starts to formulate his own ideas of the soul of Microsoft, he wrote:

To my first question, why does Microsoft exist, the message was loud and clear. We exist to build products that empower others…

We need to be insatiable in our desire to learn from the outside and bring that learning into Microsoft, while still innovating to surprise and delight our users.

That means, of course, no matter what the customer’s computing platform of choice is. To drive the point home, Nadella opens Chapter 5 with a story that punctuates his leadership approach.

There was an audible gasp and more than a smattering of chuckles in the auditorium when I reached into my suit jacket and pulled out an iPhone. No one in recent memory had seen a Microsoft CEO showing off an Apple product. Especially not at a competitor’s sales conference.

“This is a pretty unique iPhone,” I told attendees at Salesforce’s annual marketing event as the crowd quieted down.

On the giant screen behind me, a close-up of the phone appeared. One by one, the app icons flashed into view—iPhone versions of Microsoft classics like Outlook, Skype, Word, Excel, and PowerPoint as well as newer mobile applications like Dynamics, OneNote, OneDrive, Sway, and Power BI. The crowd erupted in applause.

Seeing me demo Microsoft software on an iPhone designed and built by Apple, one of our toughest, longest-standing competitors, was surprising and even refreshing.

Next Page: The story continues. Competing with Apple.