I first ran across this problem when I realized the pulse monitor app on my Series 0 Apple Watch would very frequently produce a spurious result. It would either be ridiculously low or high based on my known state. Very quickly, a new measurement would be taken and a sensible result displayed.

For example, my resting heartbeat ranges from 60 to 70. I’d occasionally get a single reading of, say, 37 or 42, but it would be quickly corrected. I’ve been waiting for several versions of watchOS to fix this problem, but it persists.

That error itself wouldn’t be so bad, but it’s cast in concrete and serves to skew the scale of the heartbeat graph. For example. 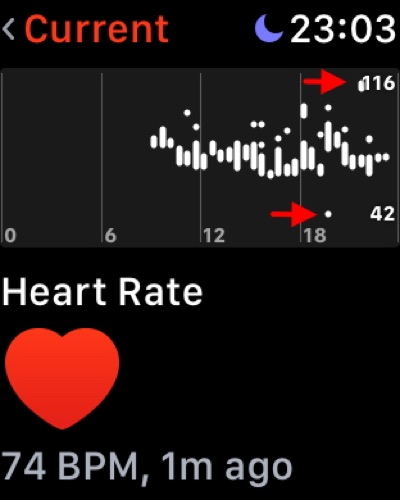 Spurious, outlier data should be dropped or editable.

(The graph above shows two data points on the high side, but I’ve seen mostly single value on the high end when there’s a similar measurement error.)

To first order, one would think that watchOS would have a mechanism to throw out any single high or low number. That’s not only good statistics, but would also make the graph’s scale easier to read visually. Alas, that isn’t done, and it just seems like poor data management.

A second part if this issue is the lack of user ability to edit health data over on the iPhone. Now, of course, I understand the desire to protect the integrity of the measured data. Too much liberty in editing can lead to the rationalized, improvisational manipulation of the data by the user. And so, some kind of philosophy is called for. When can the user fix an outright error when beneficial? When should the data be preserved, at all costs, especially when it’s being shared with a study?

A good example of this has happened to both me and Jeff Gamet. We’d start an outdoor walk, but forget to launch the Apple Watch Activity app. Then, down the road, we’d remember. The Activity app would log 40 minutes when we really walked 50 minutes. Again, there’s the issue of supporting data. The app didn’t have a chance to log the outdoor temperature, the elevation change, and our pulse in those first ten minutes. Nevertheless, for the sake of good bookkeeping, there should be a way to adjust for a short lapse at the start of the walk (or workout).

After all, if the accelerometer can detect when you pick up the watch in the morning to enter a passcode, it should be able to detect the start of a workout.

Even more common is stopping the workout and forgetting to close out the data. In this case, one can confidently truncate safely without fear of any missing data. In fact, here’s a good opportunity for haptic feedback after the workout is clearly over, based on measurement. “Are you done?”

Jeff told me that his Fitbit has always allowed this kind of event editing. Again, there has to be a balance between an iron-fisted approach to preserving every error and the proper opportunity for the user to fix input (or measurement) errors in a sensible way. Perhaps the next generation of software will attend to a practical remedy.