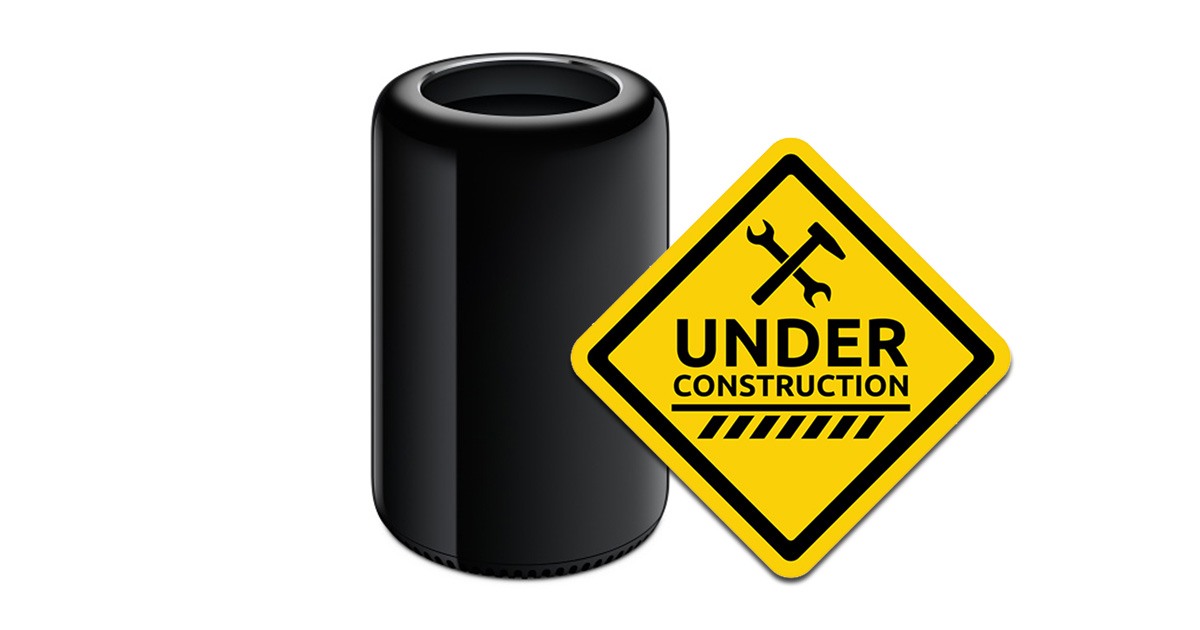 With the Mac Pro pushing four years old and concerns Apple is abandoning the pro market, the company did something very out of character: It announced a totally redesigned Mac Pro is in the works, along with a pro display. The Mac Pro is getting a minor speed bump today, too. Looks like it’s damage control time in Cupertino.

Apple spilled the beans by inviting a handful of writers to its Mac Product Realization Lab in Cupertino where they met with Phil Schiller, Craig Federighi, and John Ternus who is the vice president responsible for Mac hardware engineering. They had a frank discussion about the state of the Mac Pro where Schiller said,

With regards to the Mac Pro, we are in the process of what we call ‘completely rethinking the Mac Pro.’ We’re working on it. We have a team working hard on it right now, and we want to architect it so that we can keep it fresh with regular improvements, and we’re committed to making it our highest-end, high-throughput desktop system, designed for our demanding pro customers.

He went on to say Apple is working on a “modular system,” and that includes a pro display. They aren’t shipping, however, this year. “We think it’s really important to create something great for our pro customers who want a Mac Pro modular system, and that’ll take longer than this year to do,” Schiller said.

What Apple is saying is that pro users who have been waiting for release something—or anything—new in the pro desktop space have to wait a little longer, but there’s finally a light at the end of the tunnel. That, coupled with today’s minor performance bump, may keep its pro desktop user base from moving to competing Windows machines—at least that’s the hope.

The problem Apple is facing right now is that many of its customers have lost faith in the company’s pro-level computer strategy and feel abandoned. That’s no spurprise considering the company’s last pro desktop came out over three years ago, and many in its target market flet the design was too limiting.

The current Mac Pro was introduced in June 2013 and shipped in December of that year. Its cylinder shape can’t hold expansion cards, there isn’t room for additional internal drives, the GPUs are relatively lower performance, and feels like a design that’s been painted into a corner where expandability isn’t an option.

Apple hasn’t done anything to refresh the current Mac Pro since it shipped even while competitors keep rolling out new pro-level desktops with new processors, more RAM, and better GPU options. The Mac Pro is, for all practical purposes, a nearly four year old snapshot in time.

That’s changing soon-ish, and the message Apple is hoping it’s giving pro customers is, “We haven’t forgotten you.” The message they may be hearing, however, is “Don’t go. Please. Really, were going to fix this.” Still, the promise of a compelling new Mac Pro with a high end display to match is enticing if Apple pulls it off, and if it isn’t too late.

Apple isn’t looking at the Mac Pro as its only pro desktop option. New iMacs are coming later this year, according to Schiller, “specifically with the pro customer in mind and acknowledging that our most popular desktop with pros is an iMac.”

It’s possible the iMac is popular with pro users because in many ways it out performs the aging Mac Pro. That said, more pro-level feature in Apple’s all-in-one desktop can’t hurt.

Based on Apple’s uncharacteristically candid discussion about its pro desktop roadmap, you have three options if you’re in the market for a new machine: Wait unti later this year for the new iMacs, wait for next year’s new Mac Pro, or abandon ship and move to Windows.

Odds are Apple is concerned too many users are choosing option three and wants to stop those losses. Considering Mac Pro sales make up a single digit percentage of overall Mac sales, it’s interesting that the company is openly committing to the pro desktop market like this instead of quietly letting the product die.

Based on the current pro user sentiment this redesigned Mac Pro better be out of the park amazing, especially since we have to wait another year before seeing it. Hopefully today’s move wasn’t too little too late.

Isn’t the iPad Pro what professionals are supposed to be using to make videos and graphics? Seems to me that only dinosaurs use such heavy and unwieldy things like a workstation…

Uh, ease up a little on the “doom and gloom” attitude. There are plenty of pros who didn’t get scared and “jump ship”. There were several 3rd parties (like Sonnet) offering reasonable PCI expansion chassis, so we could still use our AJA capture, Fiber cards and Bluray burners as needed. Our six 2013 Mac Pros (and FCPX) have been working just fine for our agency and the new Mac Pro release will actually be right in line with our 5-year replacement plan anyways. So as far as we’re concerned, Apple continues to be right on schedule. Looking forward to what’s… Read more »

They finally have a path with chips also, keep you eyes on AMD for even a more powerful chip.

I have to wonder, with today’s unprecedented move of revealing future plans, if this was a result of Apple doing normal course correction,

I wonder how much of Apple’s top management energy was being put into the new headquarters building. That seems to be well on track and the suits can now focus on products.

I also think this is great news all around. Large price cuts on the current Mac Pro, a possible iMac Pro in the Fall, and clear communication from Apple about what pros can expect in the future. I am now both happy and optimistic about the Mac for the first time in a long time. I am impressed Apple decided to openly communicate its future plans. I imagine it took a lot for them to admit the 2013 Mac Pro did not work for many types of professionals and needed to be redesigned from the ground up. I have to… Read more »

Yes! How about the Mac mini?

Swell. How ’bout the Mac mini?

Someone at Apple has been listening to certain Apple-related podcasts.

It’s very good news – all we wanted was an evolution. Looking forward to what that might look like. There are a great many people ready to shell out real $$$ for something superb. 🙂

I wonder what would be the cost to upgrade the Mac Pro to Thunderbolt 3 or USB-C.
Was it so prohibitive that they decide to wait for the new machine?

It’s good to see Apple listening to people and the fact that they are going to produce displays as well as a new Mac Pro, shoes how serious they are about the Pro customers. I think the iMac Pro was always going to happen before this announcement and shouldn’t be a surprise. Would also like them to provide user friendly upgrades to iMacs such as memory & SSD upgrades without having to have a degree in engineering to make the upgrades.

Or maybe it part of their long term plan timeline.