There are two elements of our current technology we tend to over-simplify as hardware and software. More recently, we have also come to include services, not only cloud, but content streaming, privacy and security services, amongst a growing list. Apple refer to this as a ‘platform’, which can also be disaggregated into hardware and software – specific parts, like the Mac or iOS platforms.

While often used interchangeably, this is also referred to by some as an ‘ecosystem.’ However, for those who work with ecosystems, there is a meaningful and important distinction.

An ecosystem ‘is a community of living organisms in conjunction with the nonliving components of their environment, interacting as a system,’ according to Wikipedia In other words, without a living component of the user community to interact with the tech, there is no ‘ecosystem.’ It is the user community that makes that system real and dynamic. Otherwise, what Apple has is a platform, which without the user, is inanimate, inert, or for all intents and purposes, dead.

Thus, when we project where Apple might be headed with its tech, and what might be the next ‘big thing,’ we have to take into consideration the user community. And Apple does exactly that. This is an essential component not simply of ‘sales,’ a market dynamic, but of uptake, adaptation and expansion of use case, which in turn, informs the progress and evolution of the platform. Make no mistake, the  ecosystem is real.

This larger calculus exponentially complicates predictions about the future, and what specific offerings might be introduced, evolve or go extinct. Welcome to reality and the imprecision of science and evidence-based prediction. The hallmark of this world is ‘uncertainty.’ Uncertainty is a good thing; especially when, in the world of science, we can quantify it and provide a range of ‘likelihood’ or ‘probability’ of outcomes. Uncertainty prompts us to increase the accuracy and precision of our knowledge and understanding of discoverable things.

Failure to account for the user community, and the major trends in that community, is why so many tech predictions fail, and we often get a misfire between analyst or pundit expectation and delivery. In the Apple world in particular, there is a dynamic symbiosis between Apple and its user community that is practically unique in the tech world, but which drives trends of products, services and change. Most importantly, it is the defining feature of the Apple ecosystem.

While Apple likely takes onboard all input from individual users (we can opt in to send our data analytics to Apple), the company will analyze those data, and respond with a solution for the broader community; not simply where it is today, but where those trends suggest it is headed, together with those products and services that Apple already has in the pipeline likely to address those trends.

Importantly, the company will do so as a function of corporate vision. We have seen this in terms of Apple’s content consumption offerings, shifting from exclusively purchases to subscription and streaming. Although most of the film offerings still require an older model of ‘rent’ or ‘purchase’, increasingly Apple are creating original content to serve the subscription model that users have requested by voting with their wallets for competing services.

And herein lies another important complication and contributor to ‘uncertainty’; the competition. Competitors also define the broader ‘ecosystem’ beyond Apple’s that also impinges on and influences Apple’s own. If one wants to predict where Apple might head, one must take on board what Apple’s competitors are doing with products and services that address similar user trends.

However, as we have seen, it’s even more complicated still. Take ultra-portable computing, that became a priority with substantial user uptake back in the Naughties (2000’s). The then styled ‘Wintel’ world addressed this with the netbook. There was clearly a demand for this lower footprint portable computing solution, and this was Wintel’s offer. While most analysts opined that Apple had to respond, most assumed that the response would be with a similar device. Apple’s approach was more holistic, and reflected their design philosophy and aesthetic; not a device, but a solution to a defined problem.

The first offering was the iPhone, which most analysts did not see as part of that solution, and then the iPad, which was both the originator of the iPhone, but also Apple’s solution to ultra-portable computing. Apple’s response, as is usually the case, was not about the ‘device’, but the solution to a defined problem, and one which, unlike the netbook, had massive headroom for evolving to address yet other nascent demands that, according to Apple’s user metrics, indicated where user demand was headed next – a harmonized platform of interactive parts. There was nothing like it in the larger tech ecosystem; but it would solve any number of problems as yet undefined and untapped by the competition, and further expand options for productivity and content consumption.

Apple Targets the Underlying Needs of the Problem

Apple’s competitors, more often than not, address current demands with a workable device or specific service. Apple, more often than not, tries to identify the problem, then solves that current problem and the ones that follow, based on the needs that the user community will have as a result of that solution, in this case, accessing content on an otherwise ultra-portable device with limited capacity. More than a device, it was a more complete solution to the problem (maximizing productivity from a small-footprint device).

In other words, Apple predicted where the quarry of user demand was headed with the netbook, saw the larger unmet user need, predicted its path, aimed forward and nailed it. True, that was a risk, but it was an informed and calculated risk based on user data and trends.

Herein is why, more often than not, Apple gets it right. The company studies the user data, set in the context of community trends, and designs a more thoughtful and complete solution that has room to grow, fits within its platform and pushes that platform forward. In science, when a solution is simple, comprehensive and anticipates the next steps, it is described as ‘elegant.’ This was elegant, and unlike the netbook, is still with us and evolving.

The point is, predicting the future of Apple tech is complicated, no less than are predictions about living systems everywhere. However, to focus only on a present ‘device’ or ‘service’ in the absence of trends in the user community, and more importantly, not just trends, but needs, both met and unmet, and Apple’s corporate philosophy of offering not only a complete solution to those needs, but a solution that drives the further evolution of its platform, is nothing less than self-inflicted misdirection. Such analysis will almost invariably be wrong, when not farcical.

Beware of simplified analysis of, and solutions to, complex problems. As H.L. Mencken so succinctly summarized, ‘For every complex problem there is an answer that is clear, simple, and wrong.’

On the contrary, if he dropped the B-school speak (because this is not a B-school publication), the article would probably be shorter by half and I would have kept on reading past the fifth paragraph. Oh Mr/Ms Editor, a job for you.

@aardman: Many thanks for your critique. It is appreciated. Only a self-deluding fool would believe that he cannot improve his game, and I will continue to work on mine.  However, having now spent decades training and mentoring others, yet still close enough in time to vividly recall my own experience in being trained and mentored, I can share with you an observation that is now largely accepted across industries; if your goal is to help others improve, start with telling them what they’re doing right before you explain what they’re getting wrong, and how they can leverage those strengths to… Read more »

As his editor, I am delighted to have wab95 writing formally for us! I’m sorry it’s not hitting the sweet spot for you, aardman. Cheers and thanks.

Many thanks, Lee. Much appreciated. Happy Independence Day!
True independence and liberty are increasingly precious in our times. I meant to say this during US Memorial Day, but many thanks for your service in helping to preserve it.

You are welcome and thank you for your support.

On my morning walks I am currently listening to a US history podcast that gets into a lot of details that are/were not covered in high school history classes. It was quite close call that our fight for independence succeeded, more than what is generally known, and how much division there was among the “Founding Fathers”

@lee: Clearly off-topic, but I did my secondary school (junior high/middle school and high school) education under the British (UK) system, so got a slightly different take on much of US history than yours. When I first met my wife, one of her first tasks was to get me to start reading up on US history, which is now one of my favourite pastimes.  Down the rabbit hole, but it’s relevant to the holiday.  One little appreciated fact in this part of the world is the role that other countries, most notably India, played in the USA’s bid for independence.… Read more »

A couple of things I learned in the podcast. During the war the British considered cutting loose the northern colonies/states because they were of little economic value. The southern ones on the other hand exported a lot of [roducts to England. When George Washington was towards the end of his life his Doctors hastened it. They “let” a lot of blood, several times over several days. They also administered some herbs and drugs that were quite toxic. Of course that was medicine at the time. I actually did have a curry sauce, that I concocted, on my hotdog. A base… Read more » 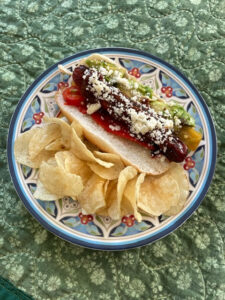 Served on a Tunisian plate 😀