The Daily Telegraph of London published a scathing condemnation of the European Union’s accusation that Ireland is giving Apple illegal state aid. The editorial breaks down the case against Ireland and Apple, characterizing the legal principles to be in violation of the EU’s own principles. 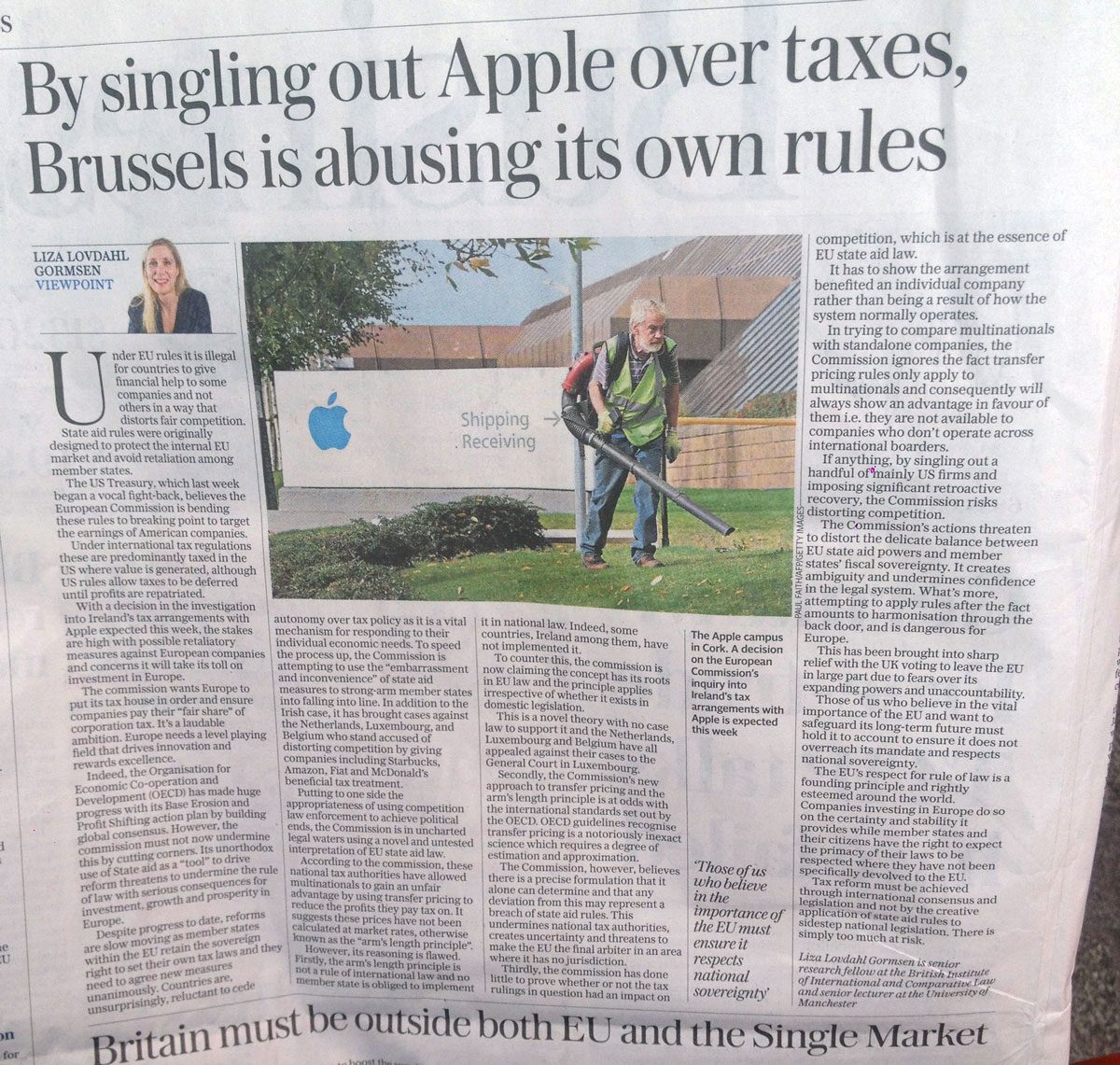 “By Singling Out Apple Over Taxes, Brussels Is Abusing Its Own Rules”

The Case Against Apple and Ireland

The EU’s European Commission (EC) has accused Ireland of giving Apple “illegal state aid,” a violation of EU member laws. The EC has lodged similar charges against The Netherlands, Belgium, and Luxembourg for similar arrangements with other multinationals.

Those arrangements allow multinationals to engage in “transfer pricing.” That practice essentially allows profits to be earned by subsidiaries in low-tax states, rather than by subsidiaries in the countries where those profits were actually generated.

Apple and other multinationals still have to pay taxes on those profits in the U.S., but not until they bring that money home. U.S. law is quite clear on the subject.

The EC is not only attacking these laws, they are claiming that Apple and other companies actually owe their host country back taxes. This, despite the fact that said host country, says otherwise.

To be blunt, transfer pricing is a disgusting practice. It’s legal, but it’s philosophically abhorrent to me. If companies like doing business in a given country, they should pay their fair share of taxes in that country to support the infrastructure, education, and other aspects of that society that supports them.

That’s as plain as day to me. But it’s also plain as day that disgusting is not the same as illegal. Ireland isn’t giving illegal state aid to Apple, it’s created a taxation system that gives it a significant advantage over other EU member states.

That system applies to every company operating in Ireland, though The Telegraph noted only multinationals can take advantage of it. This is the same sort of incentivizing that results in cities, counties, and states in the U.S. giving companies tax incentives to locate in their respective areas.

Governments will compete against one another. It would take a one-world government dictating rules for the entire planet to change that reality.

When Apple CEO Tim Cook testified in front of the U.S. Senate in 2013, he noted that Apple follows the law. He added that if those Senators didn’t like what Apple did, they should change the law. It’s a salient point, in my opinion.

The thing is that the EC can’t change Irish law. They can accuse Ireland of violating EU laws, but they can’t otherwise force Ireland to change its laws.

The Telegraph‘s Liza Lovdahl Gormsen does an excellent job of breaking down its efforts to make that accusation. The EU is under significant pressure from the U.S. and a growing number of voices to end this campaign, and The Telegraph is adding its voice to that call.

The investigation by the EC in these cases is ongoing.

Hi Bart. As John noted, when I wrote my piece, I had only the pic of the printed version to go on. We otherwise routinely link to source material as a matter of policy. I’ve also now added the link (thanks, John!) to the piece.

Here is the link Bart. http://www.telegraph.co.uk/business/2016/08/28/brussels-mustnt-achieve-tax-reform-by-using-state-aid-rules-crea/

I think Bryan was an early bird and had this out based on the paper version before the electronic version was actually posted.

The key thing here is that Apple pays Ireland the taxes Ireland charges them and they are fine with it. In other words Apple isn’t cheating anyone anything when it comes to paying its taxes. The EU is full of crap by saying Apple owes back taxes when Apple clearly paid all taxes due throughout the years. That goes for the US and abroad where ever they are.

So, without transfer pricing, how would one part of an enterprise (e.g. Apple US) be compensated for the the things it does (e.g. designing, ordering, shipping, etc. iPhones) for another part (e.g. Apple Ireland)?

Why is there no link to the original article?

This summary is nice, but it inspired me to go read the full thing, and there is no link.

Firstly, I think that’s journalistically shoddy, and secondly, it’s a poor experience for your readers.

I see that every single link in the article is an internal link – is it TMO policy not to link to anyone but TMO or something?