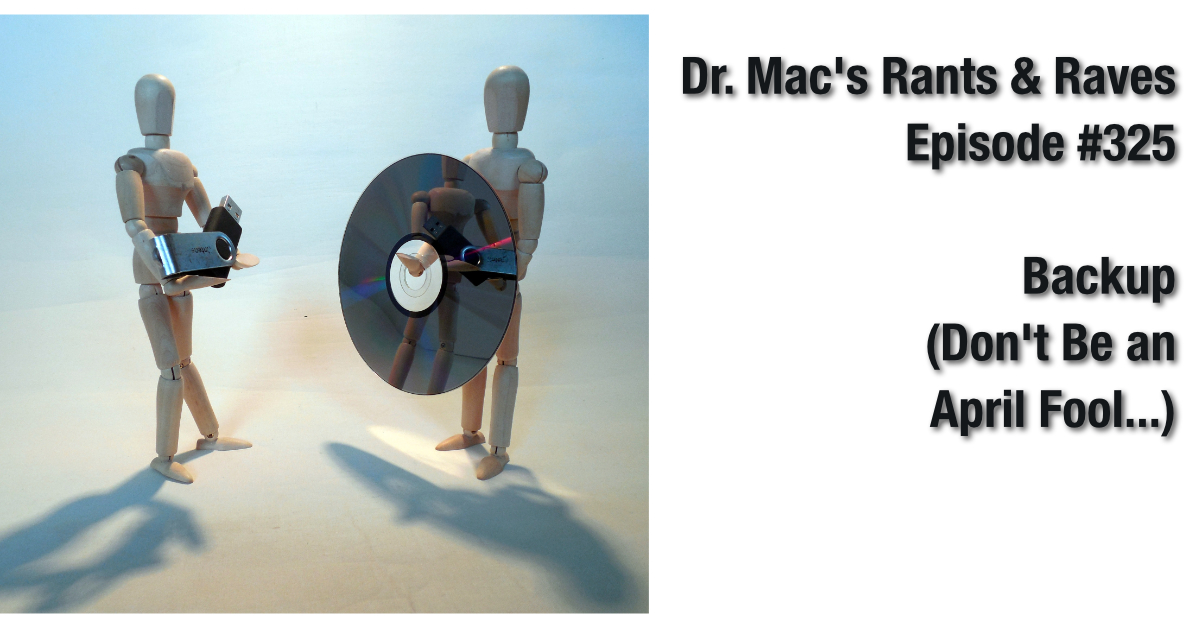 I began my first Dr. Mac’s Rants & Raves column of 2019 with these words about backups:

World Backup Day isn’t until March 31, but I didn’t want this public service announcement to wait: You are going to lose everything on your Mac hard (or solid state) drive if you don’t back up your files.

Now that World Backup Day (March 31) has come and gone, I feel it is prudent to reiterate the bad things that will happen to your precious data—your photos, videos, essays, proposals, emails, messages, and everything else—if you don’t backup.

Notice I didn’t waffle by saying you might lose everything, or it’s possible you’ll lose everything. I said, “You will lose everything on your disk when it fails and you don’t have backups.” And it’s true, with no ifs, ands, or buts about it. Your hard or solid-state drive will absolutely and positively fail someday. It probably won’t be today, but the day will definitely come because all disks fail eventually.

It’s rare that a hard or solid-state drive fails in its first year or two of service (though that’s not unheard of). It’s also rare that something (anything) you do to or install upon your Mac will render its disks unusable. But, while those things are rare, too, they can happen.

Deleting a file and later discovering you really need it isn’t as rare, nor is wishing you had saved an earlier version of a file. But either can be as devastating as a disk crash.

The Right Way to Backup

The only way to avoid the pain of losing your treasured data is to back up your disk (or disks). Here are my top two tips for doing it right:

Time Machine is a good first line of defense, but I also use Carbon Copy Cloner ($39.99) to create an offsite backup that is stored in my safe deposit box. And, because redundancy is your friend when it comes to backups, I use Backblaze ($6 a month or $60 a year) to back up all of my files to their cloud-based servers.

If you know someone whose data is at risk, inform them that a single power surge or lightning strike could destroy every bit of their data, and if that data isn’t backed up, they’re almost certain to lose all or most of it.

Wanna be a hero? Just tell everyone you care about—your parents, children, spouses, friends, and neighbors—that they will lose everything someday if it’s not backed up. Then, help them create and test a trustworthy, redundant backup system.