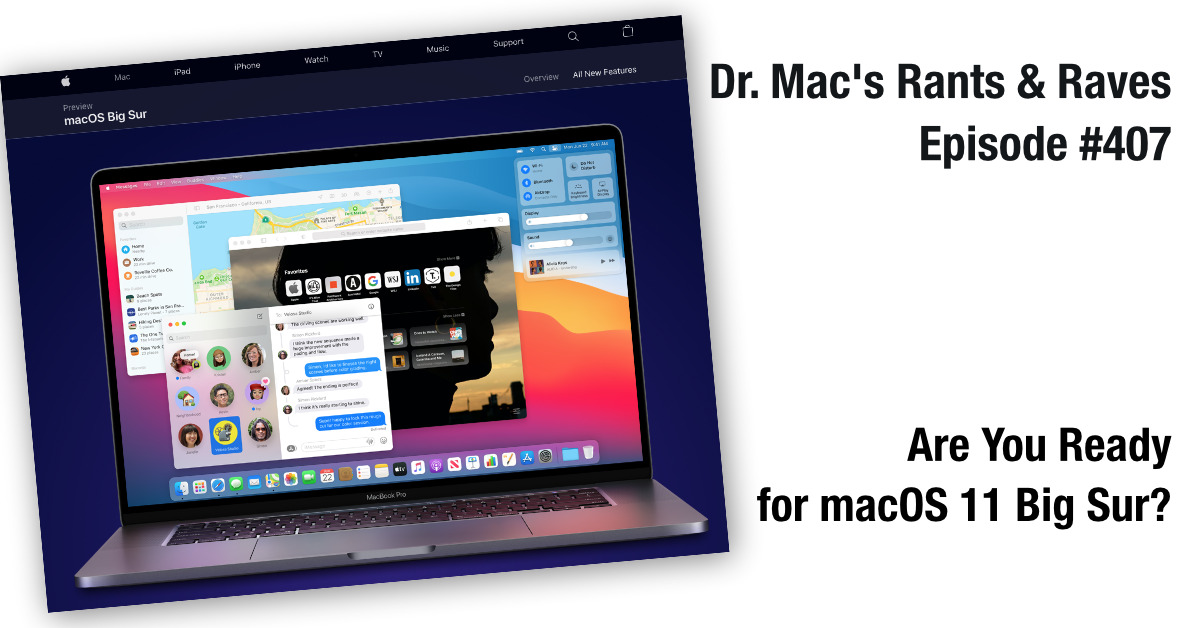 Now, after nearly two decades of version X variants, Apple is about to turn the volume up to 11 (sorry about that, Spinal Tap fans) by introducing version 11.0, aka macOS Big Sur.

Apple hasn’t announced Big Sur’s release date yet. Still, history indicates it’ll be very soon since version 10.15 Catalina shipped on October 11, 2019, and versions 10.11 El Capitan through 10.14 Mojave were all released in September of their respective years (2015–2018).

Just Say “No Thank You”

So, here’s my advice: Do not install the first release unless you have plenty of time to troubleshoot and research the inevitable issues that inevitably plague the first (or “point-zero”) release of most software.

I’ve been using pre-release versions of Big Sur since June, and although the latest beta hasn’t caused any grief, your Mac and third-party software are unlikely to be the same as mine.

I can’t predict the future. It’s possible that version 11.0 Big Sur will ship with zero bugs, and that everyone’s upgrade will be quick, easy, and painless.

It’s Easy to Upgrade but Much Harder to Downgrade

There is one last thing: If you upgrade a disk to Big Sur, there is no easy way to downgrade to Catalina. You’ll almost certainly need to erase the disk, reinstall macOS 10.15 Catalina, and then restore data from a backup. Unless you have a clone of your startup disk (as discussed in my September column on cloning), you’re facing hours without your Mac.

I’ve been doing this for a long, long time, and I can’t recall a single “point-zero” release that was totally bug-free. Each new release of macOS fills my inbox with email messages from readers sorry they ignored my advice.

So, do me a favor this year and follow my advice. When Apple releases Big Sur next month, just say no. Ignore all the annoying notifications, badges, and emails you’re sure to receive, all extolling Big Sur’s virtues and tantalizing you with cool new features.

Remember that those cool new features will still be there in a month or two when you install version 11.1 or 11.2. By then, the most egregious bugs should be exterminated, and third-party developers should have eradicated any Big Sur-related bugs they’ve discovered in the apps upon which you depend.