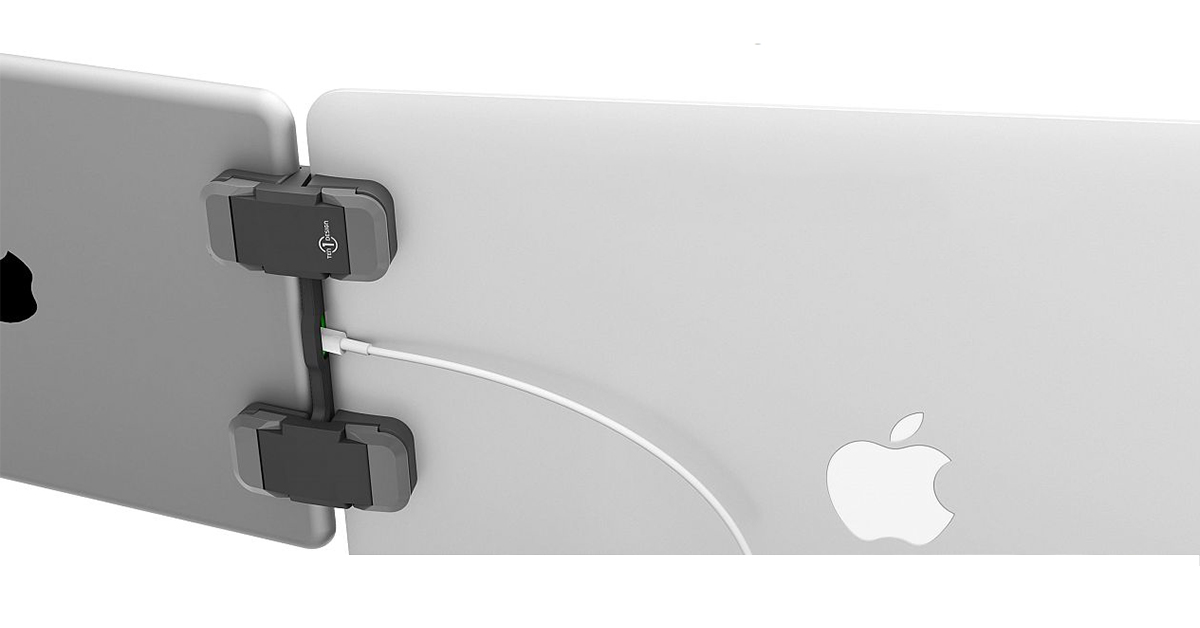 I’m a sucker for clever gadgets. Show me something that does the job better, faster, or more elegantly and I can’t resist. I’ve recently been playing with two such devices from Ten One Design.

The first solves the problem of Apple’s MacBook and iPad chargers—the square white plastic things you plug into a wall outlet to charge your Apple devices.

Ten One Design’s Blockhead is the clever solution. It’s a replacement for the removable two-prong plug adapter that comes with Apple chargers. Blockhead replaces that plug with one that’s been rotated 90°, allowing your charger to sit flush against the wall instead of sticking out.

With Blockhead, your charger sits flush against the wall, protruding just 1.2 inches. Use Apple’s power cord and it’ll protrude 2.6 inches; use Apple’s 2-prong plug adapter and it sticks out 3.8 inches. So, in addition to being less susceptible to kicking or dislodging, it also means your charger fits more easily into outlets behind furniture. Finally, at just $19.95 each (or two for $34.94), you can afford to have one for each of your Apple chargers (if you have more than one).

Mountie+: Clever Device to Get More Use from your iPad

The second clever Ten One Design gadget is called Mountie + ($34.95), which is a small double-sided clip that allows your tablet or smartphone to hang securely from the screen of your laptop.

Why might you want to hang a tablet or smartphone from your laptop screen? I can think of several good use cases, but the first (and my current favorite) is to use my iPad as a second display for my MacBook Pro when I travel.

All it takes is Mountie+ and the Duet Display app (currently $9.99 in the iOS App Store), which converts my iPad into a second screen I can use with my MacBook Pro.

My iPad Mini was collecting dust before Mountie+… Now, it’s my second screen when I’m on the road and I don’t leave home without it.

One last thing: In addition to Mountie+, Ten One Design offers a smaller model I didn’t try called Mountie—it’s less expensive ($24.95), smaller, and works with most smartphones and small tablets.

They don’t fold. But it’s not a dealbreaker for me. I usually use it at home behind my desk. If I have to pack it for travel I usually just toss it into my backpack with the prongs attached. And while $20 is not cheap, if it lets you use your charger in a place you couldn’t before, or saves your laptop from being pulled to the floor when you kick the charger out of the wall for the hundredth time… It’s a small price to pay. 🙂

Good idea. Do the electrical prongs fold in like on Apple’s product? If not,.. deal killer. At $20 too expensive as well.