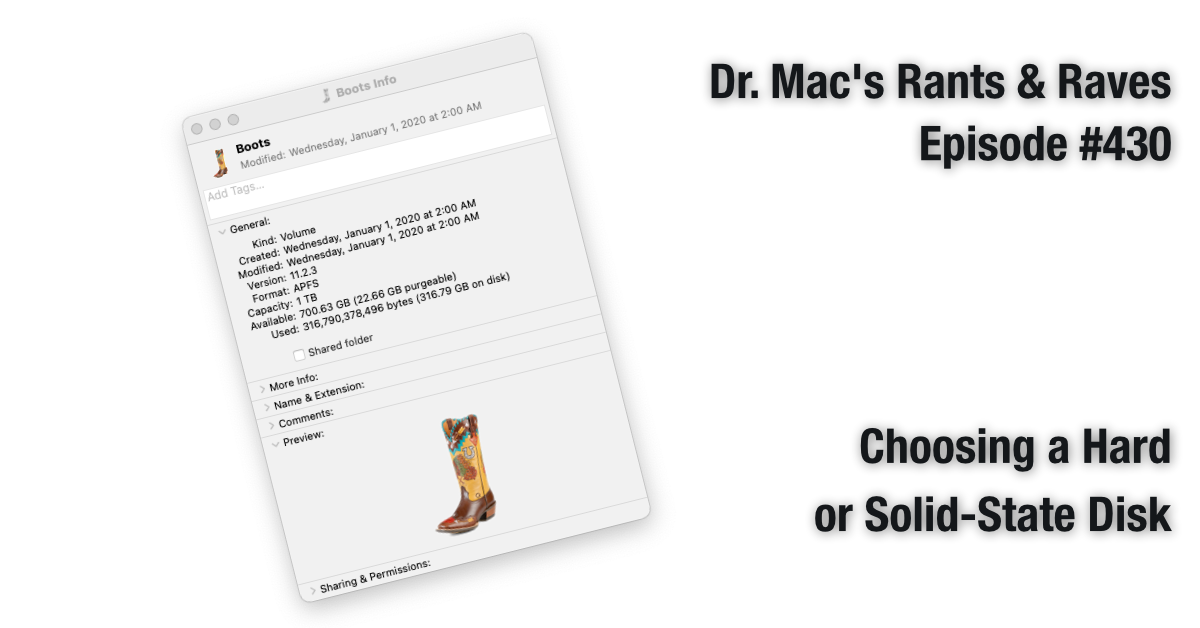 In honor of World Backup Day (March 31), here are tips for acquiring hard or solid-state disks to use as replacements, additional storage, or backups.

If It’s a Boot Disk…

First and foremost, if you are replacing your startup disk, or will use this disk to boot your Mac, you absolutely and positively want a solid-state drive (SSD), not a hard disk drive (HDD).

Yes, SSDs cost more, but trust me, it’ll be worth it since today’s macOS is optimized for SSDs and not for hard disks. The result is that everything happens faster. With an SSD, your Mac will start up two or three times faster, and your apps and documents will launch much more quickly.

Moving right along, if you need more storage and don’t care to replace your boot drive, consider which is more appropriate—an external SSD or an external HDD. While SSDs cost significantly more, they’re noticeably faster for launching apps and opening or copying files than HDDs.

If you’re planning to store your Music or Photos library on this external drive (as so many of us do), you’ll be amazed at how much more responsive the Music and Photos apps become when their libraries reside on an SSD.

In other words, if you can afford a solid-state drive, it’s almost always your best option with one exception: backups.

When it comes to backups, I feel that cost and redundancy are more important than speed, so I back up all my data to good, old-fashioned hard disk drives. And, since all disks fail eventually, I back up everything at least three times—a local backup, an offsite backup, and a cloud-based backup.

I shop for backup disks at all the usual places—Amazon.com, Macsales.com, BestBuy.com, and the like—and then choose the biggest, cheapest hard disk drive available. I don’t care if it’s made by Seagate, Western Digital, or Toshiba—I only care which one has the lowest cost per gigabyte and comes with a factory warranty.

If you’re thinking about drives that claim a Mean Time Between Failures (MTBF) of a million hours or more, I don’t put much stock in those figures. It doesn’t mean YOUR drive won’t fail for a million hours. Rather, it means that some drives will fail sooner, and others will fail later. The only thing you can rely upon is that your drive will fail someday.

And while drive manufacturers may replace your drive at no (or low) cost (if it’s under warranty), they won’t replace your precious data. Yet another reason I recommend redundancy be an integral part of your backup strategy.

Finally, if you don’t want to take my word for it, or care to research drive failure rates further before you shop, my favorite online backup service (BackBlaze) tracks failure rates for the 160,000+ hard drives currently in service.

Golden advice, as ever.

At this stage, not only my bootable drive, but all of my backups, apart from online (I use CrashPlan Pro), are on solid state.

With the anticipation and now advent of macOS running on SOCs, I began to wonder some time ago about the continued compatibility of the Mac with the spinning drives. For now, there does not seem to be an issue, but longterm, I wonder about how much longer these will be supported.

I suspect there will come a time when booting from spinning magnetic media is no longer supported. If that should happen, I believe we’ll still be able to use hard drives for additional storage or as backup disks for a good, long time.

Thanks for the article. I agree, although if you can afford it, SSD are also great for backups, including Time Machine in APFS, which is now forced by macOS 11 Big Sur on new backups (TMA means Time Machine APFS): Time Machine to APFS: First full backup TMA is now the only means of starting a new backup set in Big Sur. If you present it with an empty HFS+ volume, it will convert that to APFS and use that as your TMA backup store. https://eclecticlight.co/2021/04/15/time-machine-to-apfs-first-full-backup/ Luckily, SSD prices are dropping all the time. BTW, this is related to SSD… Read more »

I agree SSDs are great for backups if you can afford them. With my huge and redundant backup sets, I’m not ready to fork out that kind of dough (yet). That said, I will move my Music and Photos libraries to external SSDs soon.

And thanks for the links… fascinating stuff. I’m currently testing two backups—one HFS+ and the other APFS. I haven’t looked closely at the differences but plan to (for an upcoming column).

Thank you for your great articles. Looking forward to the next one… BTW this compares both backup options: