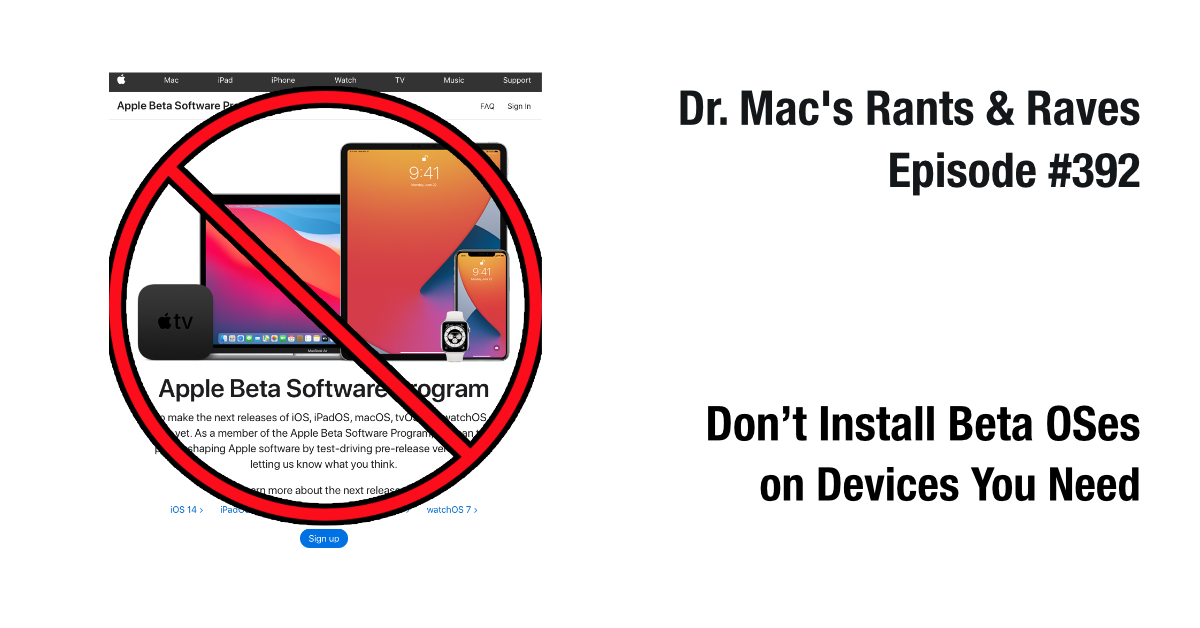 Six years ago, in July 2014, Apple did something it had never done before—introduced a public beta program for its next-generation operating system (OS X 10.10 a.k.a. Yosemite).

Apple just released public betas of its desktop and mobile OSes, so I’d like to offer you some food for thought before you install any beta operating system on any device.

Because this column is called Dr. Mac’s Rants & Raves, I’ll focus on beta Mac operating systems. But the same advice applies to beta releases of iOS, iPadOS, watchOS, or tvOS.

First and foremost, remember that beta software is unfinished. Apple says, “Please be sure to back up your Mac using Time Machine before you install the beta.”

That’s excellent advice, but I’d take it a step further and create a clone of your startup disk (as a backup of your Time Machine backup). That way, if things go awry, you can reboot from the clone and be back at work in a few minutes. Without a clone, you could spend half a day (or more) reinstalling macOS and then migrating data from the Time Machine backup. Just the thought of wasting half a day as my Mac installs and migrates is enough to give me nightmares.

If You Only Have One…

If you only have one Mac and rely on it for work, you’d be a fool to install a beta. Apple recommends installing public betas on a secondary Mac, since it may contain errors or inaccuracies, and some applications and services may not work as expected.

I think that’s overly cautious. You don’t need a whole second Mac to run a beta OS, you just need another hard or solid-state drive. Just install the beta on the other drive and then reboot while holding down the Option key, which will allow you to choose the drive with the beta OS as your startup disk. When you’re done playing with the beta, reboot while pressing the Option key to select your usual startup disk.

About your iCloud Data

Another consideration is that data synced via iCloud, including your contacts, appointments, reminders, and notes, may be affected. With many releases in the past, if you sync using the beta, you’ll only be able to sync with other Macs (and iDevices) running a compatible beta release.

So, if you do decide to give the beta a try, think long and hard before you enable its iCloud services.

If You DO Install a Beta

For those who choose to take the plunge despite my warnings, here is one last tip: Check the Software Update System Preferences pane often and install beta updates as soon as they become available. Why? Mostly because each new release squashes existing bugs and often includes new or improved features.

If there’s one thing I want you to take away from this column, it’s that you should NEVER, EVER install a beta operating system on any device you depend on. I’ve spent endless hours erasing and reinstalling betas on my spare devices… DO YOU have endless hours to spare if your beta device goes south?

And that’s all he wrote.

2 thoughts on “Don’t Install Betas on Devices You Need”