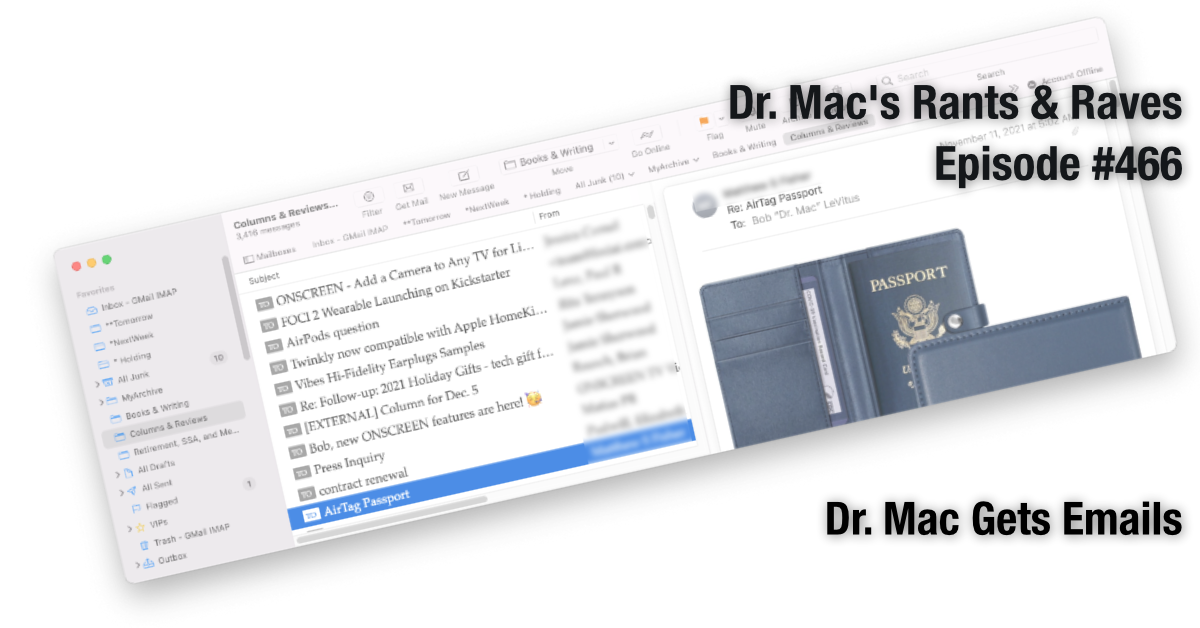 I get emails from readers. Here are a couple I think you’ll find informative:

I hoped last week’s column on macOS Monterey was the last I’d have to write about the latest operating system and its issues. Still, a recent email from “Bob the Texan Fan” (not his real name) leads me to believe I may have been premature in declaring Monterey safe.

I thought I was updating Big Sur, but it turned out I was upgrading to Monterey. I experienced many of the problems you mentioned – and more. My Mac Pro would periodically reboot on its own, sending an error report to Apple. My mouse would intermittently lose Bluetooth connectivity until I rebooted, or it recognized the mouse but refused to connect until I again rebooted. Scrolling with the Apple mouse stopped working after a while, forcing another reboot. I got frequent reminders that my Time Machine backup disk was improperly ejected (I never touched it, and it continued to work just fine). I couldn’t read or eject a DVD. And, the Finder kept hanging up; relaunching it caused my desktop icons and the menu bar to disappear, leaving no way to reboot.

Upgrading to Monterey version 12.1 helped, but I still find occasional anomalies which I didn’t have under Big Sur or High Sierra.

I stopped using PCs because of constant problems with Windows and incessant upgrades. My experiences with Apple have been really good since I switched in 2015. However, now I am beginning to notice the superior stability of Windows (10) and its ability to still run 32-bit programs.

Your articles on Monterey have been spot on. I wished I could have waited for at least two more upgrades to Monterey before taking the plunge.

So, the question is (once again) whether it’s safe to upgrade to Monterey. And, once again, I offer a qualified “yes.” Plan for the worst, hope for the best and make two backups (and test their integrity) before you begin.

This brings us to the second interesting email I received this week from reader John:

How do you suggest we test our backups? Many do not have the luxury of a second Mac as a guinea pig. If the restore(s) fail, we’re up the creek, except for a laborious fresh install and data recovery from what survives, and app reinstallation.

Use an adequate-capacity external drive as the boot volume and test the restore to that?

If you have (or can afford to buy) a spare drive, a full restore to it is an excellent way to test a backup’s integrity. That can be time-consuming, so if you don’t have a spare disk or are pressed for time, the next best test is to restore a handful of files from the backup and check that they’re usable.

And make backups with different applications, like Time Machine, Carbon Copy Cloner and SuperDuper. Some only connected to the Mac when doing the backups, and some off-site, if possible. Cloud backup would be an extra advantage. Not only in case some backup fails, but also in case that malware like ransomware strikes. Use common sense (the less common of the senses) to prevent it.