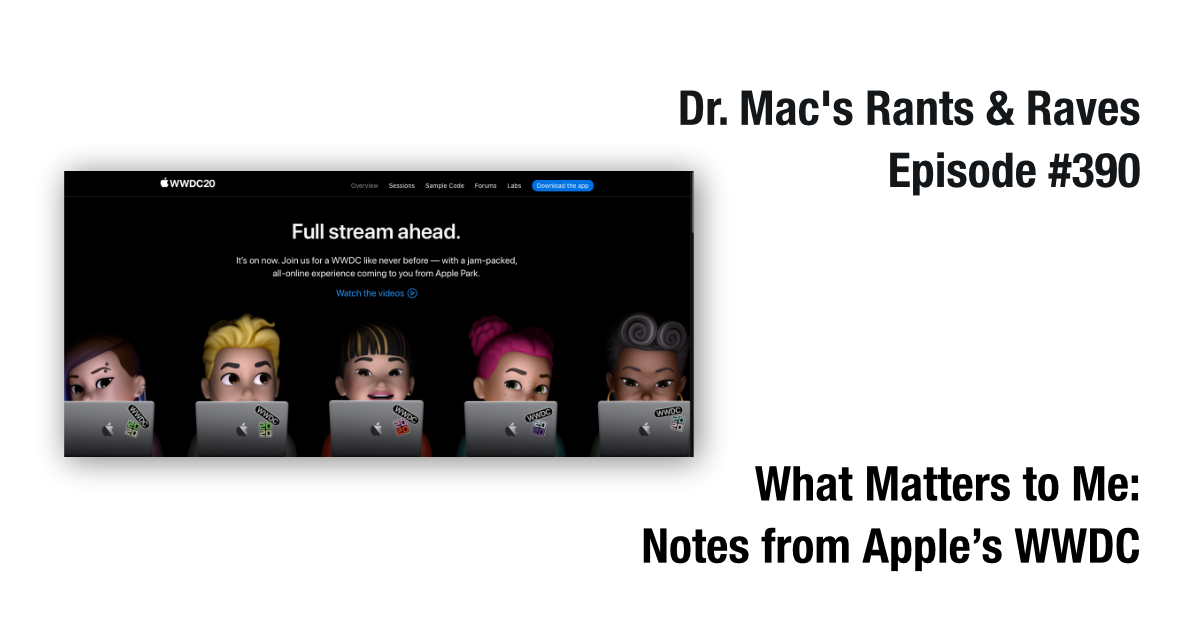 Apple kicked off its annual conference for developers last Monday.

The nearly two-hour keynote was notable for several reasons, the most obvious of which was the lack of a live audience for the first time. It’s also the first time the conference was 100% virtual, with all sessions streamed and available for download via the free Apple Developer app, which is now available for Mac, iOS, and iPadOS.

The most important news, in case you haven’t heard, is that Apple will transition the Mac from Intel processors to its own “world-class custom silicon to deliver industry-leading performance and powerful new technologies.”

The first Macs with Apple processors will be available before the end of the year, kicking off a two-year transition cycle. That’s all I have for now, but I assure you I’ll have much to say once I get my hands on an Apple-chipped Mac.

Moving right along, the next release of macOS is named Big Sur and includes the biggest Safari update ever, plus a visual redesign affecting almost every pixel on the screen. On top of the visual overhaul, Big Sur includes a customizable menu bar, an all-new Control Center, a redesigned Maps app, considerable improvements to the Messages app, and much more.

The surprise was that after 15 releases, macOS X (pronounced “ten”) will turn 11 with the release of Big Sur. There’s no word yet on whether “eleven” is expressed as a Roman (XI) or cardinal (11) numeral, but if I were a betting man, I’d bet on the latter.

iOS 14 offers new ways to customize your Home Screen, including redesigned widgets that can be pinned to any page. It also introduces the App Library, which organizes your apps by category automatically, and “intelligently surfaces apps that may be helpful in the moment.” It also adds App Clips, “a small part of an app experience designed to be discovered at the moment it is needed.” So, for example, if you’re at a parking meter that requires a specific app to pay for parking, an App Clip will appear and let you pay instantly without finding and downloading the app.

iPadOS 14 will include all of the new iOS 14 features as well as powerful new handwriting recognition features for Apple pencil and less-obtrusive notifications.

There were other announcements that mattered (to me), including an update to AirPods Pro that will add “spatial audio with dynamic head tracking,” to provide pseudo-surround sound.

I’m installing developer releases and will have much more to say once I’ve had some hands-on time with them.

There is one more thing…

I thought this was the best Apple special event broadcast yet…

The missing audience meant no time wasted on cutaways, reaction shots, or waiting for the applause to die down, making the show feel more streamlined. And, the production seemed slicker and faster-paced, with more presenters (and more diverse presenters) and faster transitions between presenters, not to mention quite a bit less fluff than usual.

If you have an hour and 48 minutes to spare, you can watch the replay here.

Hello Bob:   First, I’m glad that you pointed out the X at the end of OS X is the Roman numeral for 10 in the Arabic numeral system, as opposed to X as in X-ray, given that this followed Apple’s retirement of OS9, which should have made it obvious.    One of TMO’s early writers, Rodney O’Lane (still miss you, brother), used to make this point with wicked humour. Being an African American, and wearing one of Apple’s OS X t-shirts that simply read, ‘X’, he got tired of people thinking that this was a socio-political statement about the… Read more »

“ordinal (11) numeral, but if I were a betting man, I’d bet on ordinal.”
You mean cardinal number.
11th would the ordinal number.
“a number denoting quantity (one, two, three, etc.), as opposed to an ordinal number (first, second, third, etc.).”

My bad. I should have researched “ordinal” (vs. “cardinal”) but didn’t.

Thanks. What about running true Intel x86 Windows on Mac using Boot Camp and VMware Fusion? Emulation now? Virtualization in the future once Microsoft releases Windows 64-bit for ARM?

I don’t think anybody knows just yet… I heard a long discussion of it on a recent MacGeekGab episode but I think the conclusion was, “I guess we’ll find out when Apple starts shipping ARM-based Macs.”

I didn’t devote much space to it here, but I will write more as soon as I know more.