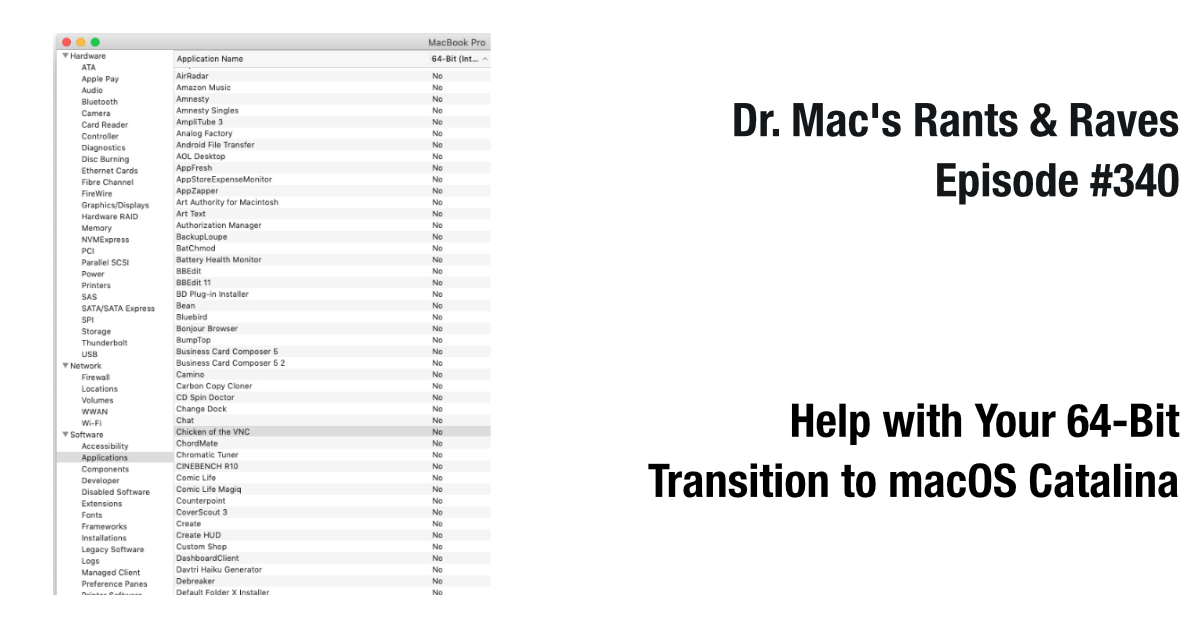 This column is about the transition to 64-bit only computing arriving with macOS 10.15 Catalina this Fall, and what it means to you. But first, here’s my usual warning—DO NOT run a beta operating system on any device you depend upon.

Unless you’re prepared to erase and restore your device on a regular basis, I recommend you not install a beta on your everyday Mac or iDevice. I run both on spare devices—an old MacBook Air and an iPhone 8 Plus—and have never lost a minute of work uninstalling them to revert to a stable OS.

While this OS beta cycle happens every year, this year introduces a new wrinkle for macOS: Catalina is 64-bit only, so your 32-bit applications will cease to function. (Apple has a support article on this topic.)

What does that mean? According to Apple, “The technologies that define today’s Mac experience—such as Metal graphics acceleration—work only with 64-bit apps. To ensure that the apps you purchase are as advanced as the Mac you run them on, all future Mac software will eventually be required to be 64-bit.”

That time is coming soon. When you upgrade to Catalina, your 32-bit apps will stop working. Period.

If you’re running macOS Mojave and you’ve seen an alert that says, “This app is not optimized for your Mac and needs to be updated, those are the apps you’re going to lose under Catalina.

What Are You Going To Do About It?

It’s not too soon to begin thinking about which (if any) of your 32-bit apps are critical to your workflow. You can, of course, use System Report. But it’s a huge pain in the butt, especially if you have as many apps as I do.

The Easier Way: Use Go64

I have only one thing to add, but the more apps you have (I have over 500), this one thing will make your transition to Catalina ever so much smoother.

That thing is a free app called Go64 from St. Clair Software (maker of Default Folder X—one of a handful of utilities I would hate to be without). Like System Report, Go64 displays a list of your apps and identifies which are 32-bit. But unlike System Report, Go64 includes a link to the website of almost every 32-bit app, so it’s easy (or at least easier) to find out whether a 64-bit version is available, and how much (if anything) that upgrade will cost.

It also lets you record the price of each upgrade while maintaining a running total. With toolbar buttons to launch, reveal, or move the selected file to the Trash, Go64 makes the process easy.

Go64 has one other trick you won’t find in System Report: It identifies apps that are 64-bit but contain some 32-bit code—namely plugins, frameworks, or services—which may or may not run correctly in macOS Catalina.

There is Another Option…

By the way, if you rely upon 32-bit apps such as older versions of Microsoft Office or Adobe Creative Suite, or other any other pricy old software, you do have at least one other option: Don’t upgrade. You’ll miss out on Catalina’s improvements and new features, but your old apps will continue to work, and you won’t have to spend a dime on new software (at least not immediately).

It’s not an ideal solution, but it’s worth considering if the cost of upgrading your mission-critical apps is prohibitive.

Thank you a ton for this article Dr. Mac! I wasn’t aware of Go64. I have so many games and different apps that won’t be upgraded to 64-bit that I will be staying in 32-bit land for some time to come. And when I do upgrade to Catalina and beyond, I will need another older Mac to host my whole 32-bit library of titles. This is kind of like another Mac OS 9 -> Mac OS X transition. PowerPC -> Intel was much easier for me with almost nothing left behind (eg. AppleWorks was the largest issue) and whatever didn’t… Read more »

Glad I could help…

For what it’s worth, I wasn’t aware of it until I heard Dave and John talk about it on Mac Geek Gab!

It’s truly awesome if you have a large collection of apps.