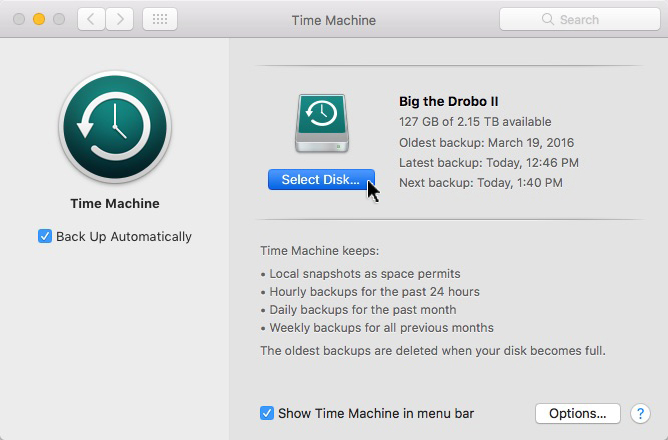 “There are only two kinds of Mac users: Those who have lost data, and those who will.” I said that in 1989 in my first book, Dr. Macintosh, and I’ve been saying it at least once a year ever since… It’s sad that so many users still don’t start backing up until after they’ve lost irreplaceable files. In 2016 (as in every previous year), one of the most common issues reported by friends and readers was a crashed hard or solid-state drive.

Read my lips: Your drive—hard or solid-state— will die someday. Perhaps not in 2017, but I guarantee it will die a horrible death within the next few years. When it does it’s likely that some or all the precious data it contained will be gone forever.

If You Don’t Backup, You’re Going to Lose Your Stuff

Think about all the one-of-a-kind photos, family videos, and other important documents on your hard drive… Now consider a hardware failure that makes them “none-of-a-kind.”

Trust me on this—if you don’t backup, you’re going to lose your stuff and it won’t be fun. And, have you seen the prices for professional data recovery services? If not, trust me again—you don’t want to know. Let’s just say a comprehensive backup system will cost you a fraction of what data recovery might cost.

Adopting a comprehensive backup strategy with multiple backups stored in multiple locations is the best way to avoid losing your data. That being said, any backup routine — even just dragging important files onto another disk, flash drive, or cloud storage of some type — is better than having no backup at all.

But it’s not good. So, if you don’t already have a big external hard disk handy, go get one. When you connect it for the first time, Time Machine (built into macOS since time immemorial) will ask if you want to use this disk for backups. Say yes and it copies every document on your hard disk to the second hard disk. Then, once an hour, it copies any new files or files that have changed since the last backup, to your backup disk.

That’s all there is to it. Once you set it up, you’ll hardly know its there until you need it because your boot disk bit the dust or you need a file or folder that’s been deleted.

By the way, that’s one of the lovely side effects of having good backups: You can retrieve files or folders months (or years) after they’ve been deleted from your disk.

One backup is good, but not good enough. So consider attaching another external hard drive (or two) and letting Time Machine use each new drive as a backup destination in turn, round-robin style. Attach the new drive, and then open the Time Machine System Preferences pane and click the Select Disk button. When the alert below appears, click Use Both.

Next: Single Point of Failure for Mac Backups, Testing, and Redundancy