It’s been rumored for some time that Apple plans to discontinue the AirPort product line: AirPort Extreme, AirPort Express, and AirPort Time Capsule. It hasn’t happened yet, but I suspect it will soon. I mean… there hasn’t been a major update or improvement to an AirPort product since 2013! So, when my AirPort Extreme began acting wonky last year, I decided not to buy 5-year old technology and began looking into third-party Wi-Fi solutions.

I was never happy with the AirPort Extreme’s coverage. Even after extending the network with a pair of AirPort Expresses, my Wi-Fi reception was slow or nonexistent at my workbench in the garage, or the deck and BBQ pit out back.

Mesh: The Next Big Thing

My research indicated I would be best served by one of these newfangled “mesh” networks instead of a single router. These relatively new systems use two or more access points that communicate intelligently amongst themselves to provide a “mesh” that bathes your home in fast Wi-Fi.

Based on recommendations from friends and colleagues (TMO‘s and Mac Geek Gab’s Dave Hamilton for one), I went with a $399 Eero system consisting of a gateway plus a pair of “beacons.” The gateway has Ethernet ports and connects to the cable modem; the beacons are wireless white ovals that plug directly into a wall outlet. 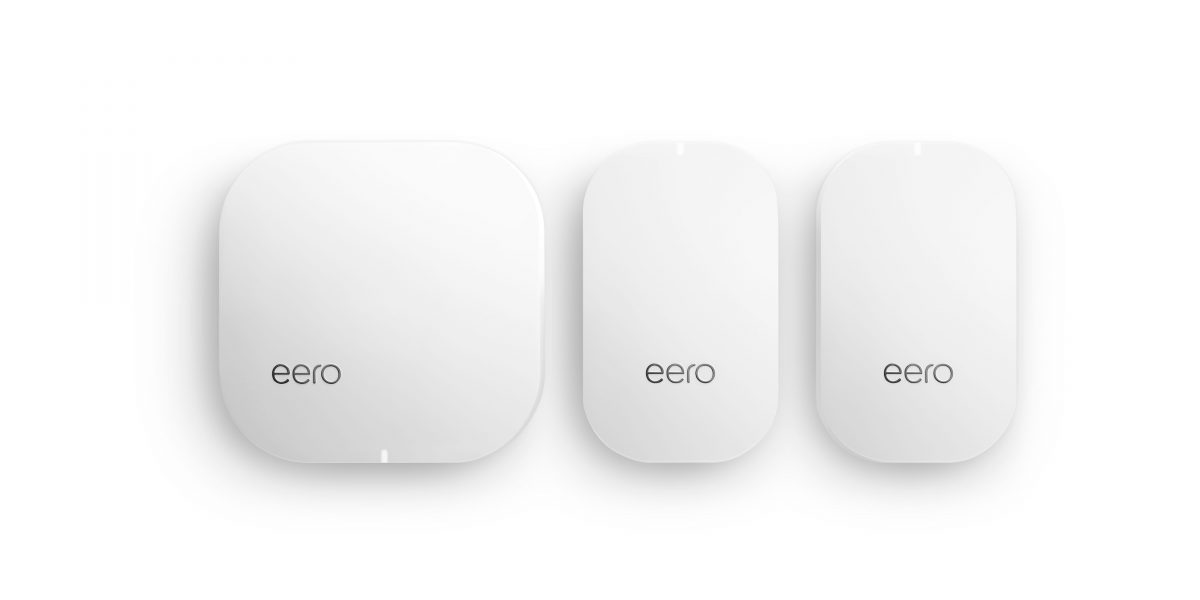 My home mesh is made up of an Eero gateway (left) and two Eero beacons (right).

There’s an excellent Eero iOS app that guides you through setup and helps you place your beacons. Within ten minutes of opening the box, the Eero Wi-Fi network was up and running flawlessly. 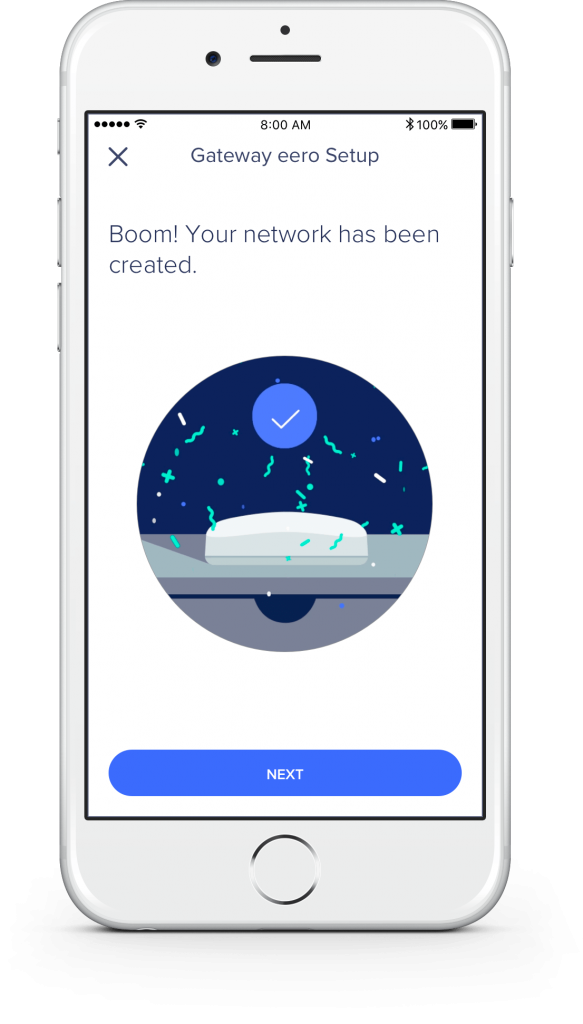 Setting up the Eero mesh network was simple using the Eero iOS app.

And, it has worked flawlessly with dozens of devices and nary a hiccup for months.

At My House, Mesh is Better in Every Way

Sadly, my AirPort Extreme died before I could measure its upload/download speeds in different locations in and around my house. Like my deceased AirPort network, the new Eero network can stream video to multiple iPads, iPhones, and Macs in multiple rooms without stuttering. But unlike the deceased AirPort network, which barely reached the garage or backyard, the Eero network lets me stream video at my workbench in the garage, or in most of my backyard.

Finally, the iOS app does more than just help with network setup. It also includes a comprehensive dashboard, with your current upload/download speeds along with the status of each gateway and beacon.

The Eero app’s dashboard is clear and concise.

Connected devices are listed with usage statistics, so it’s simple to see how many devices are currently connected, and with how much data each device is using.

Lots of data is available for every connected device.

Another nice touch is the built-in (optional) night light in Beacons. 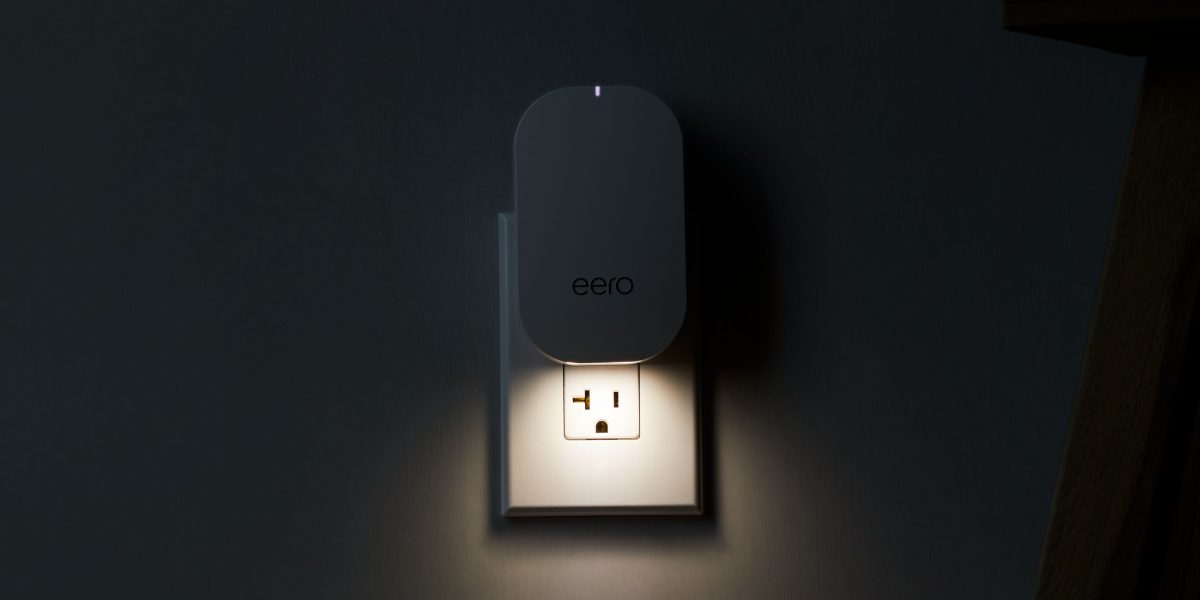 The optional nightlight in Beacons is a nice touch.

If you’re unhappy with your current Wi-Fi network, a mesh network from Eero could be just what the doctor ordered.

I’ve heard that among mesh networks, the eero is among the slowest. Apple seems to have endorsed the Linksys Velop series.

I’m not convinced fastest is the same as best. There are factors other than raw speed — latency, ability to maintain a connection, traffic management, user experience, ease of setup, etc.— that come into play. I want it all—speed plus all the other goodies—and so far the Eero system has delivered beautifully.

I just tested (with Speedtest) the network in my den and saw 234 down/10.4 up. My AirPort network died before I had an opportunity to benchmark it, but I’m pretty sure the Eero is getting WAY better throughput than my old AirPort Extreme/Express combo.

Identifying where speed matters to you will allow you to really suss out which is “best”, because, right now, there is no one system that is best for all scenarios.

Thanks, Dave! I know you have much more experience with mesh system than I, so thanks for chiming in!

I’ve been looking closely to mesh to replace what has been a reliable home network based on the latest AirPort Extreme (801.11ac) as well as the previous Airport (n) and an Express. When I switched to Google Fiber at gigabit speed I had blazing fast speed at the network box and AirPort Extreme (800-900Mbps) in my upstairs office but much slower (30Mbps) downstairs near the Airport(n). With that in mind I’ve thought of deploying several more Airport Extremes (AEs) hard wired via Ethernet Cat5e or Cat6 on a roaming network, that way my existing wi-fi is simply expanded by each… Read more »

SchulzKC: I don’t know the answer to this but I think Dave (Hamilton) might….

I asked him to stop by and chime in if he had time. :-p

Stepping in here as Bob asked me to take a look for you! There’s nothing wrong with the “quasi-mesh” you plan to deploy. Indeed, many of us (me included) ran things like this for years with great success. And you’re totally right that wired backhaul is almost always going to be faster/better/more-efficient than wireless backhaul (with “backhaul” describing the transmission between your access points or mesh points). I think the part you’re missing is that “mesh” doesn’t necessarily mean “wireless backhaul”. Indeed, eero happily supports wired backhaul, and will leverage its benefits automatically. Several other mesh systems do, too, and… Read more »

Thanks, Dave. For what it’s worth, Dave’s enthusiasm for the Eero network (mostly on Mac Geek Gab) was at least partly responsible for my selecting them over other mesh makers.

lssmit02: Don’t have AT&T so I can’t try it… But the price sure sounds right if it works. LCC0256: I agree with “if it ain’t broke, don’t fix it.” But my AirPort Extreme/Express network WAS broken even before it actually broke. What I didn’t want to do was replace it with the same thing that wasn’t working very well before (and 5 year-old tech, at that). My house isn’t large but wi-fi at my workbench in the garage or on my back deck was never good even with two AirPort Expresses “extending” it. The Eero system was as easy to… Read more »

About the Home Wi-Fi of The Next Generations.
My home network manages at one time or another 24 separate wired and wireless devices. 20 of those are Apple devices (MacBook Pros iMac, iPads, iPhones, AirPods ).Mesh Smesh my Extreme and one Express used for bridge is gives me 100% signal in 100% of my home.So newyorkcoin is thankedfull to it of their good service.

I have been using AirPort Extreme/Express’s for over ten years with absolutely NO issues. Maybe it is due to the fact that I only require coverage for around 3000 sq,ft. single story home. I literally plugged the devices in – Apple idiot proofed the set up and they have been working like clockwork ever since. Upgraded to the newest Extreme a couple of years ago. My home network manages at one time or another 24 separate wired and wireless devices. 20 of those are Apple devices (MacBook Pros iMac, iPads, iPhones, iPod Touches, Apple TVs, AirPods, ) Mesh Smesh my… Read more »

Here’s an alternative, that works with the AT&T U-verse 5268AC modem: AirTies 4920. You can buy one directly from AT&T for $35, and it will add a mesh system for a lot less than buying a new Eero router. So far, it has worked well for me. I needed to only add one to my house, but you can add additional Airties as you need them.

Thanks, I will look into that. I have Uverse service and I find that their supplied WiFi enabled modem to be weak. I have an Airport Extreme connected to that and the signal from it is much stronger. That being said there is one slow spot in a corner room of the house where the signal has to pass through a bathroom tile wall and the furnace. To fix that I have an older Airport bridged and placed in that room, it does have different password.