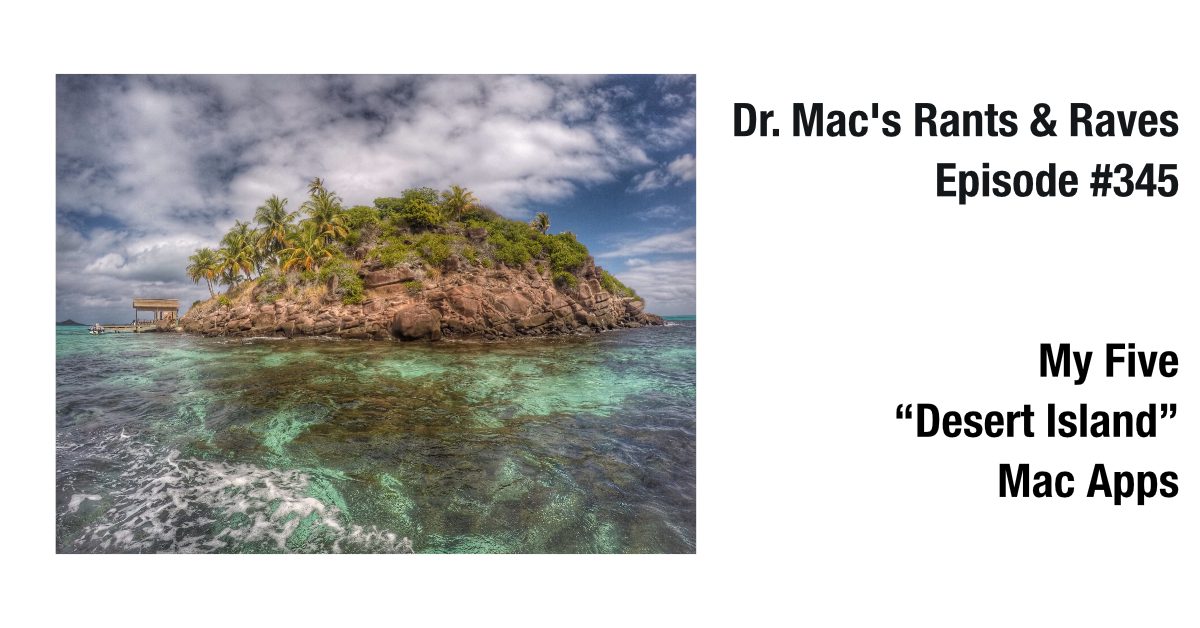 We used to love making “desert island” lists. The rules were simple: If you were stranded on a desert island, which 5 (or 10) record albums would you bring? Never mind electricity, audio equipment, and things you’d probably need a lot more than records and audio gear; the object was to name your top five favorite albums of all time.

I thought it would be interesting to play using Mac apps instead of record albums.  Here’s how it works: You’re stranded on a desert island. You’ve got a brand-new Mac and can add just 5 third-party apps. Which apps would they be and why? Never mind the electricity, Internet, or other logical thoughts—what five apps would you not want to be without?

Exactly a year ago in this very column I said:

In closing, I’d like to highlight just three Keyboard Maestro features (out of more than 100) that save me tons of time and effort:

Those features (plus dozens more) are why Keyboard Maestro sits at the top of my list.

I have literally thousands of passwords. Literally.

macOS Keychain Access and iCloud syncing aren’t bad, but for managing a large number of logins, credit cards, and secure notes, 1Password is a must. Plus, it syncs with 1Password for iDevices, which is (in my humble opinion), the only way to manage passwords on an iOS device.

Just last week I told you I prefer to compose words in a text-only program such as Ulysses or BBEdit. It was hard to pick, but Ulysses built-in organizational tools, auto-saving every keystroke, and myriad export options are why it edged out BBEdit, but just by a hair.

I spend too much time navigating Open and Save dialogs and sheets, so Default Folder X is one of those little gems I’ve grown to depend upon.

macOS rarely points those dialogs or sheets where I want them; Default Folder X gets it right every time. And, it also includes myriad convenient options like drop-down Favorites and Recents menus, keyboard shortcuts for favorite folders, and more.

There is one more thing: I considered naming SetApp as one of my five apps… but decided that would be cheating.

So… those are my 5 desert island apps… but what about you? It’s easy to play—just send your list to [email protected], and I’ll compile ‘em and let you know the results in an upcoming column.