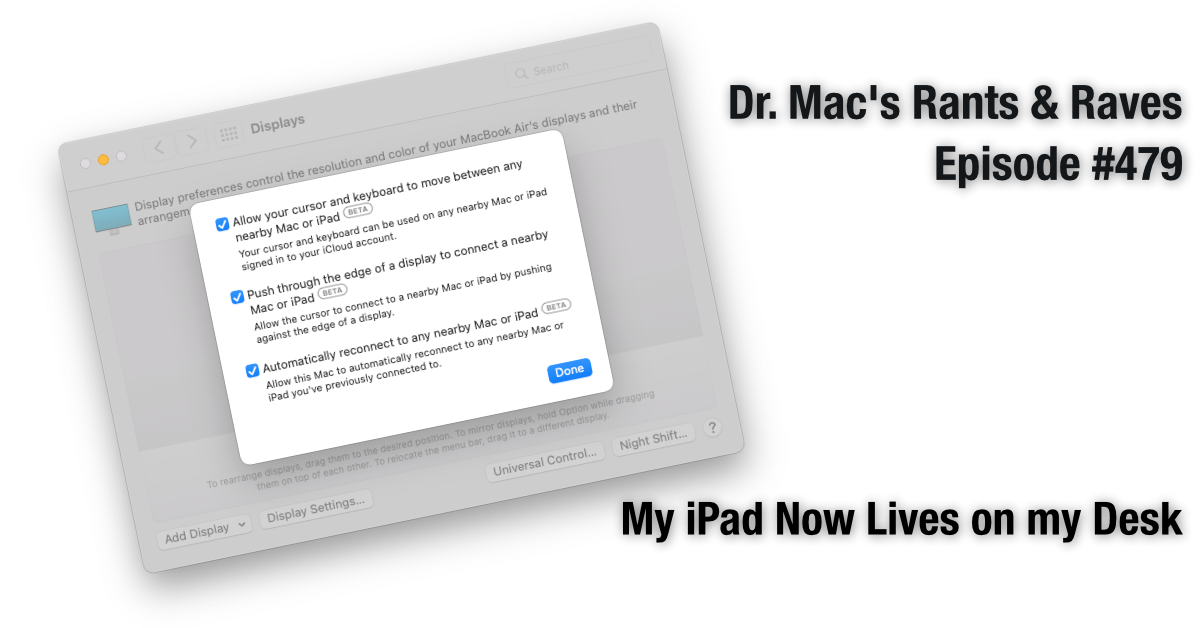 Where is your iPad when you’re not using it? If you didn’t answer “right next to my Mac,” the recent release of macOS 12.3 and iPadOS 15.4—the first to include Universal Control—might just change your mind (and your habits).

Universal Control forms a bond between your iPad and your Mac, letting you use your Mac’s keyboard and trackpad (or mouse) to control your iPad without touching it.

What’s even cooler is that once Universal Control is enabled on your Mac (click the new Universal Control button in System Preferences > Displays) and iPad (tap Settings > General > AirPlay & Handoff and enable Cursor and Keyboard Beta), you can drag files from your Mac to your iPad (and vice versa) in real-time.

But the coolest part is that it all works wirelessly (and magically) whenever your iPad and Mac are together.

There are a couple of things you should note. First, the feature is in “beta,” so it isn’t finished and may still have quirks or bugs. For example, it doesn’t appear to understand alias files. So, when you drag an alias file from your Mac to your iPad, it does one of two things, neither of which is the desired behavior: It creates an empty (useless) document on the iPad or does nothing at all. Apple will fix this (and other quirks) in upcoming releases, but until then, be aware that you may encounter anomalies.

If you’d prefer to use your Mac’s physical keyboard instead of the iPad’s touchscreen, you will love Universal Control.

I used to recharge my iPad on a table across the room when I wasn’t using it. But, since I began using Universal Control, it has found a new, permanent home on my desk.

If Universal Control doesn’t convince you the best place for an iPad is on the desk next to your Mac, another relatively new feature called Sidecar might. Sidecar, which works wirelessly with most Macs and iPads running the latest versions of their respective OSes, lets you use your iPad as an external display to mirror or extend your Mac desktop.

Since I have a 27-inch Monoprice display connected to the MacBook Air on my desk, I don’t have much use for Sidecar at home. But I consider it essential whenever I work anywhere else. I love using my iPad as a second display for my Mac whenever I work anywhere but at my desk. It doesn’t add much weight or bulk to my backpack, and I’d probably have it with me anyway.

The point is that Universal Control and Sidecar make my iPad more useful than ever. These days if I’m using my Mac, there’s a good chance my iPad is close by and in use.

One thought on “My iPad Now Lives on my Desk”