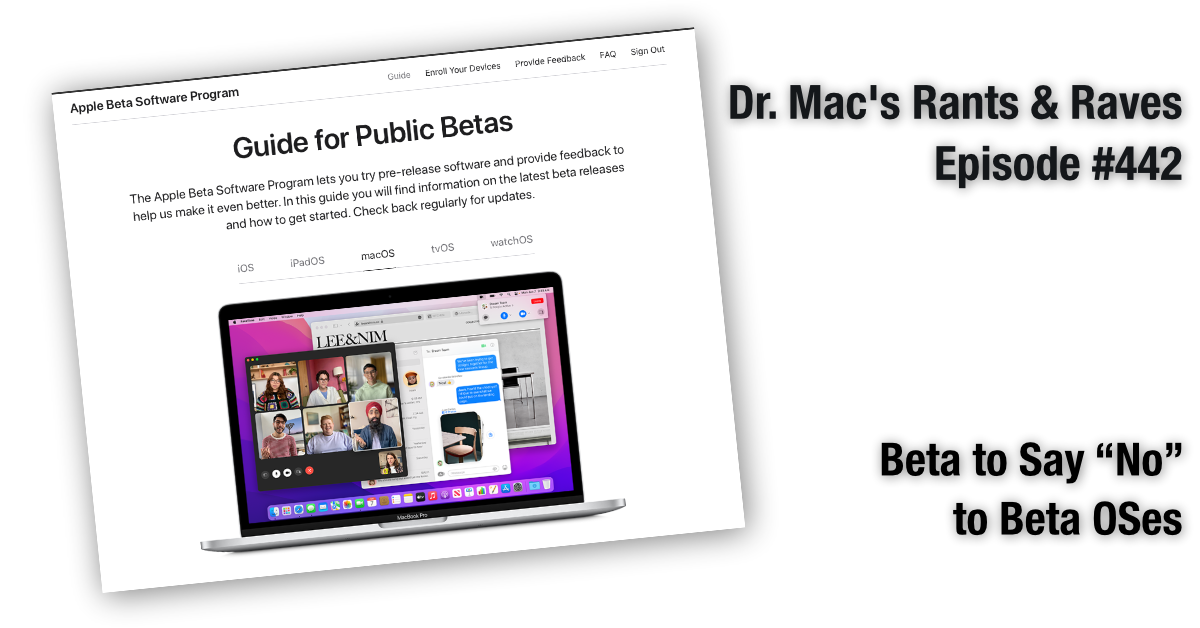 Long-time readers will recognize today’s rant as something I’ve offered annually for more than a decade—a plea not to install a beta operating system on any device you rely upon.

For as long as Apple has been offering free pre-release public beta versions of its operating systems, I’ve been explaining why it’s a bad idea to install a beta OS on any device you can’t afford to be without for a while. How long a while? However long it takes you to erase the device, reinstall the previous version of its OS, and restore your content from a backup. In other words, you’re going to lose several hours (or more) before the device is usable.

But, despite begging, coaxing, and cajoling you annually, each year, I hear from readers who are ever so sorry they disregarded my advice.

And that advice hasn’t changed in nearly a decade: If you only have one device, and you rely on it to get things done, you’d be a fool to install a beta OS.

If you’re still considering installing a beta OS, consider what I said in a July 2015 column:

Before you install a beta, read the fine print that says, “Install (betas) only on non-production devices that are not business-critical. We strongly recommend installing on a secondary system or device or a secondary partition on your Mac.”

I’ll do more than strongly recommend it. I think you’re an idiot if you install a beta on your only Mac or iDevice. You should only install beta operating systems on a device you wouldn’t mind erasing (and probably erasing more than once).

Still not convinced? Here is more of my advice (this time from an August 2017 column):

In the case of an iDevice, you may not be able to easily revert to the previous (current) version of iOS once you’ve installed the beta. And, even if you can revert, you will almost certainly have to wipe (erase) the device first. Even if you have complete faith in the iDevice backup-and-restore process (which I don’t), you may be without your iPhone (or iPad or iPod touch) for hours while you attempt to erase it and restore it from a backup.

If you have only one Mac and know how to format and partition disks, you can create a bootable drive or partition and use it for beta testing. If you don’t know what that means or you’re not comfortable erasing and partitioning disks, you should avoid installing beta software on your only Mac.

I’d go a step further and warn that you should have multiple backups before installing a beta OS, just in case.

There is one more thing: I promise to stop writing about this every year as soon as I stop receiving tales of woe from beta testers who didn’t know better.

If you’ve got a spare device and can’t wait to try new features, knock yourself out. If, on the other hand, you’re about to install a beta operating system on a device you depend upon, I implore you not to be foolish.

This never gets old.

Besides, there will always be those amongst us who tell ourselves, ‘Yeah, but this time…’, for whatever reason(s).

You should probably just create a shortcut that automatically posts this advice annually within a week of WWDC.

The other shortcut you could build is the one about backups, both on local media and online, and run that one 6 months apart from the first one. Consider it the yin to the beta advice yang.

Thanks. No matter how many times I write about it, there’s always someone (or a few someones) who regret making a bad decision. 🙂