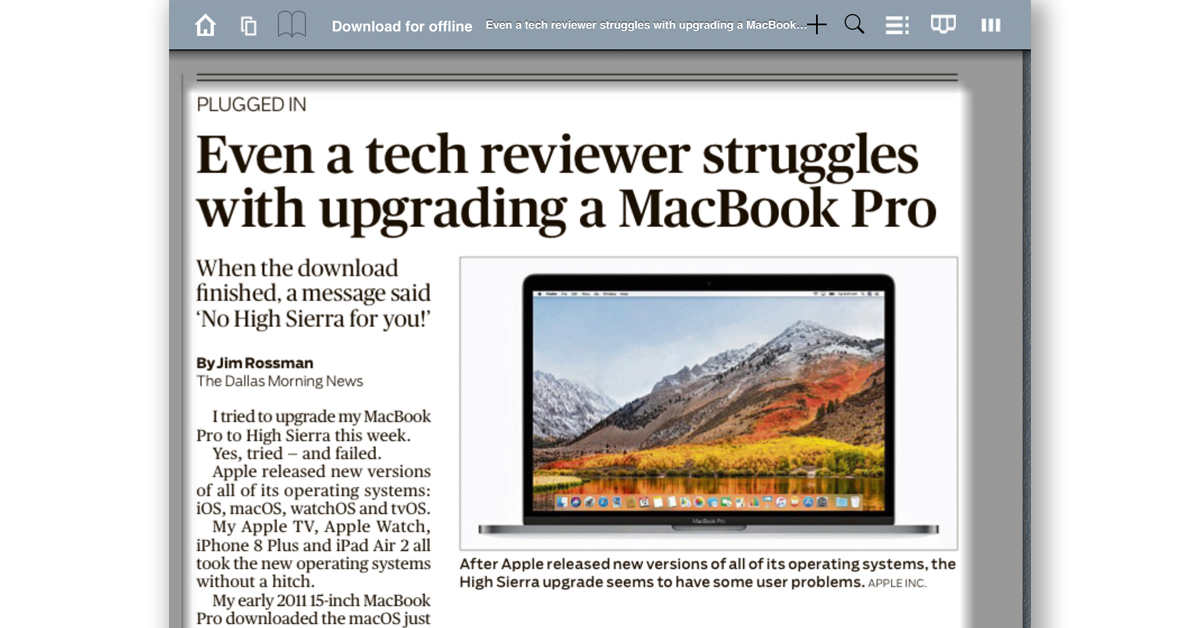 I didn’t intend to write about OS upgrades again this year. But, two things that happened last week forced me to reconsider.

The first was an email from a reader that said:

Should have stayed away from macOS High Sierra. Now my MacBook Pro will not let me login. Have tried everything to fix the problem. Looks like I will be going to the local Apple dealer to get it fixed. Wish I had never tried this update. It won’t even let me re-install macOS.

I devoted a whole column to things you should do before you consider any OS upgrade (see Dr. Mac for Sept. 28, 2017). So, while I sympathized with this person, I didn’t feel obliged to revisit the subject.

Even A Tech Reviewer Struggles…

Then, before I wrote this column, the second thing happened. I read an article by Jim Rossman in the Austin American Statesman entitled, “Even a Tech Reviewer Struggles with Upgrading a MacBook Pro.” In it, he recounts how he tried unsuccessfully to upgrade his MacBook Pro from macOS Sierra (v10.12) to macOS High Sierra (v10.13).

I don’t know Jim Rossman personally, but I’ve read his work for years and know he covers a lot of the same ground in his columns as I do in mine. In other words, he’s an experienced tech writer, quite familiar with the potential pitfalls and perils that come along with upgrading an operating system.

Still, something went wrong during his High Sierra upgrade. He said, “all I got was a gray circle with a line through it” and a system that, “wouldn’t do anything at all.”

He goes on to say he didn’t follow his own advice about frequent backups, so his most-recent backup was a week old. After using target disk mode to back up files he’d created in the last week to his wife’s Mac, he then restored his MacBook Pro from the week-old Time Machine backup.

Think about that. Even if you’ve done every single thing I recommend before you upgrade—backing up, backing up again, researching application compatibility at www.roaringapps.com, and searching the Internet for problems others are experiencing—you could still encounter an issue that could leave you Mac-less for 5 hours or more.

My point is that when you upgrade macOS (or any OS, for that matter), your device could become inoperable for hours or days, regardless of how well-prepared you are.

I suspect incidents like this are rare these days, but, as the email from my reader and Mr. Rossman’s column make clear, it can and does still happen. So, before you upgrade macOS again, consider whether you can afford to be without your Mac for hours or days.

11 thoughts on “The Last Word on OS Upgrades”