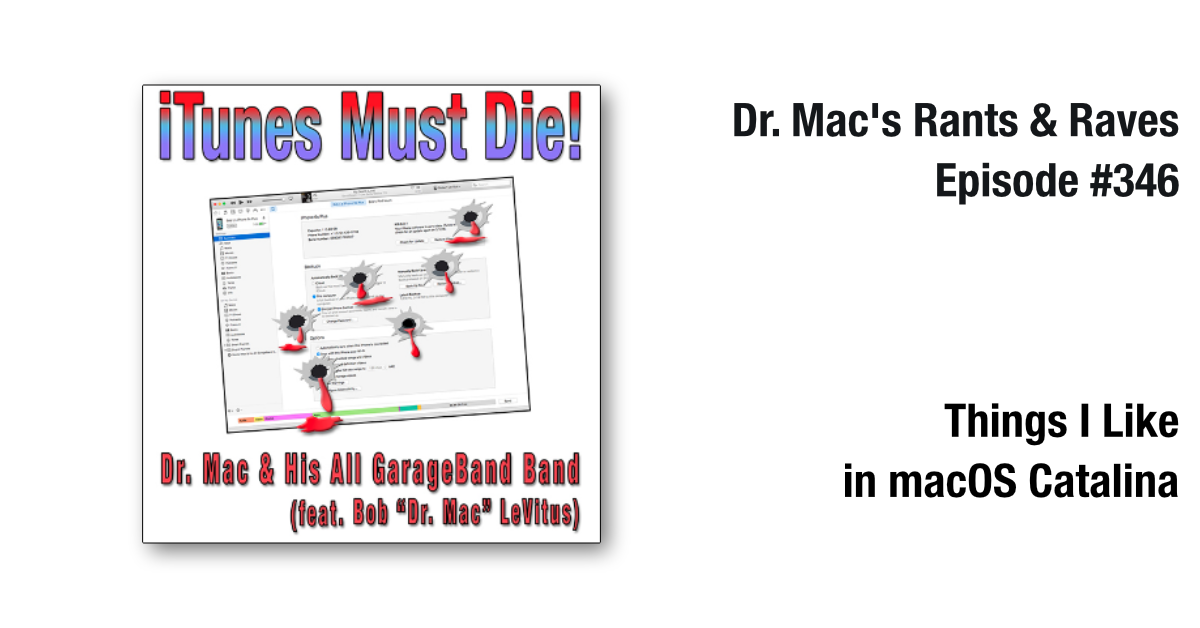 Every summer for as long as I can remember I’ve done the same thing. First, I write a column warning you of the dangers of running beta versions of Apple operating systems on any device you rely upon (for anything). Then, I spend the rest of the summer running beta versions of macOS and iOS as I update my For Dummies books. I’m almost finished with macOS Catalina For Dummies and  iPhone For Dummies 13th edition. Which is to say I spent most of the past decade of summers bursting with desire to share the best of the new operating systems’ features with you, gentle reader.

While Apple doesn’t disclose when this year’s crop of new OSes will ship, if history is any indication, macOS Catalina should become available on your Macs (free, as usual) before the end of September.

So here are a couple of new features I like a lot, and think you’ll like, too.

But First, The Obligatory Disclaimer:

Now, before I discuss any of Catalina’s features, I’d like to (once again) remind you that I don’t advise installing the very first release of any major operating system. The first release will be version 10.15 (or 10.15.0), but don’t be tempted to install it. As a guy who has been on this riverboat many times, I assure you that waiting for the first or second bug-fix release—versions 10.15.1 or 10.15.2 respectively before you upgrade—will probably save you some grief.

The first bug-fix usually comes along within a month or two of the first release. Spend that time looking online for reports of bugs, incompatibilities, apps that fail, or anything else that might affect your workflow after you upgrade.

Sorry for all the weasel words, but if I omit them, I always get email chastising me for “making me install that &^%$ beta.” You’ve been warned, so now allow me to tantalize you with the two macOS Catalina’s features I like best (so far).

At the top of my list of Catalina’s improvements is the demise of iTunes, which is replaced by three new apps and the Finder in Catalina. So far, I find working with the Music, TV, and Podcasts apps a lot less confusing than when everything was crammed into iTunes.

And using the Finder to sync files with iOS devices just makes sense and seems easier ever before once you get used to it.

You know how I feel about iTunes… (If you don’t, click here or click the album art below to find out.)

And My Other Favorite Catalina Feature is…

The second major Catalina feature I’m already in love with is called Sidecar. It allows you to use an iPad as a second (or even third or fourth) display with your Mac. The nifty twist is that you can also use an iPad and an Apple Pencil as a precision drawing tablet, at least with a handful (so far) of supported Mac apps.

Last November I wrote two columns about how much I liked Duet Display (software) and Luna Display (software/hardware combination), which both let you use an iPad as an external display with your Mac.

Catalina does that and more for free (and does it wirelessly if you so desire).

You’ve got to love that. I do, and I think you will, too.

P. S. Duet Display, Luna Display, and other apps like them are about to be “Sherlocked.” If you’re too young to know what that means, I suggest you ask your dad or mom (assuming they’re Apple enthusiasts). The rest of you can click here for the Urban Dictionary definition of “being Sherlocked.”.

While I expect those products to survive, at least for a while for Macs and iPads too old to upgrade to Catalina or iPad OS, I always feel bad for developers when they get Sherlocked. (Like Dan Wood and Karelia Software, who have been Sherlocked not once but twice! Ouch!)