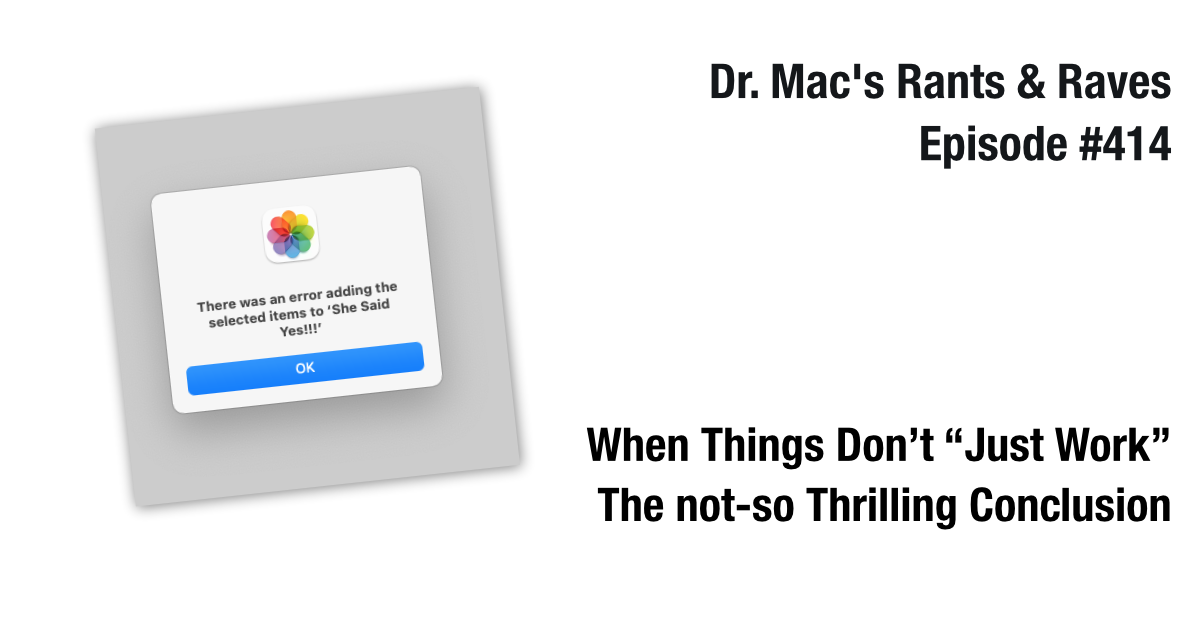 I’ve been trying to resolve an issue that causes shared albums to fail in Apple’s Photos app for nearly a month now, as I detailed in my two most recent columns.

I’ve been using shared albums in Photos (and iPhoto before it) for years, and it always just worked… until last month. Since then, I’ve been unable to create shared photo albums on my Macs, my iPhone, or my iPad.

After countless hours spent creating new Photos libraries, reformatting my SSD, and reinstalling Big Sur (twice), the problem persisted. So, I contacted Apple Support once again, hoping the third time would be the charm.

The Third Time Wasn’t the Charm

What happened next blew my mind. My support rep told me the only fix was to copy the data files from my current user account to an external storage device, create a new user account, and then copy that data to the new user account. Since I have nearly 300GB of data in my Home folder and my startup disk is only 500GB, that would take the better part of a day and deleting tens of thousands of files. And the only benefit would be the ability to create shared albums in Photos again.

Since I didn’t want to spend countless hours shuffling files just to create shared albums in Photos, I asked my Apple guru if there was a less odious solution; he said he was sorry, but there wasn’t.

That was not the outcome I’d hoped for. But, since I was unwilling to waste any more time on the issue it was time to think outside of the box… or, at least outside of the Apple universe. I came up with what I think is a brilliant workaround. And, unlike Photos’ shared albums, my out-of-the-box solution works with non-Apple devices. And, that enabled me to share the pictures with my Luddite sister who eschews Apple stuff. Finally, it didn’t require new software or subscriptions.

That solution is, my friends, is Google Photos. I feel stupid for not thinking of it before wasting hours chasing the Photos bug. So far, I’ve had no complaints, and my shared Google Photos album continues to work as expected. (For what it’s worth, I’m pretty sure Amazon Photos would have worked equally well.)

While I consider myself a darn good Apple troubleshooter, I learned something from this experience: In the future, I will consider all available options before I devote even one minute to troubleshooting.