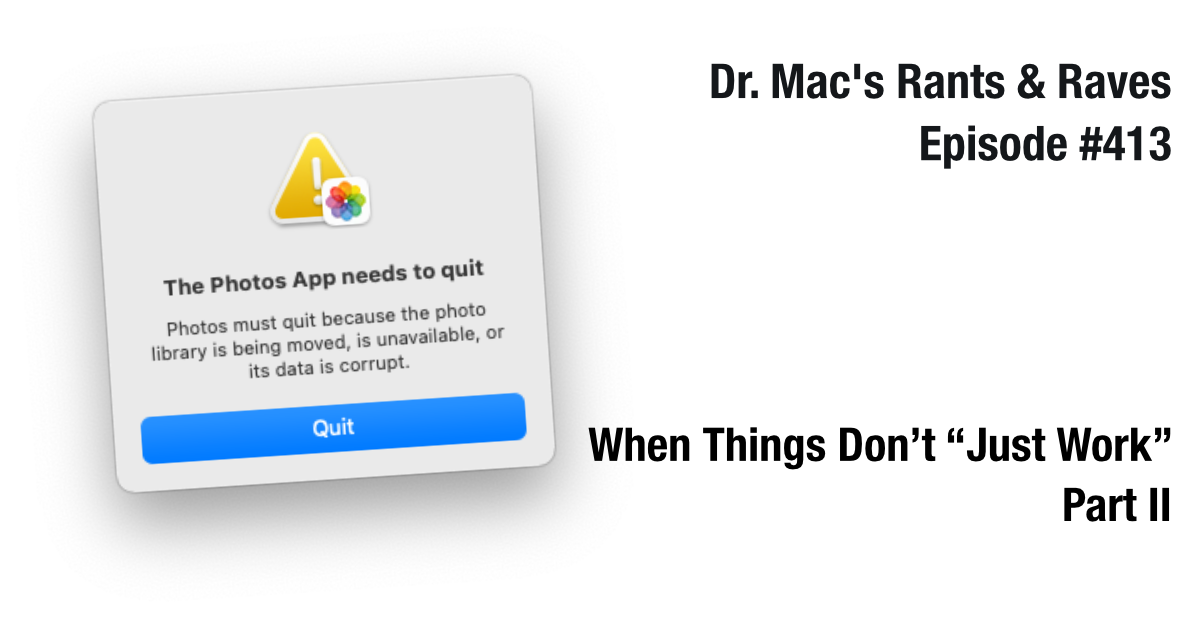 Spoiler Alert: At the end of llast week’s column, I promised you a thrilling conclusion this week. That’s not going to happen for reasons that will soon become apparent.

When last we spoke, I could not create new shared albums in Apple’s Photos app on my Mac or iDevices, and I was waiting for my new Photos library to slurp down my almost 70,000 photos and videos from iCloud overnight.

Then things really got weird. In the morning, I discovered the same darned error message on my screen: “The Photos App needs to quit because the photo library is being moved, is unavailable, or its data is corrupt.” When I relaunched Photos, I was dismayed to see that my brand-new Photos library file was damaged and could not be opened.

Since my Photos library (and my music and video libraries) are stored on an 8TB external USB hard drive, I began to suspect my USB cable or USB 3 hub were failing. So, I swapped out the cable for a new one and avoided the hub by connecting it directly to a USB port on my MacBook Pro.

And that solved part of the problem. My Photos library hasn’t become corrupted or unusable since then. Sadly, the original issue—unable to create shared albums—persisted on all my devices.

I considered reformatting my startup disk, reinstalling Big Sur, and starting from scratch with Photos, but decided to contact Apple Support and see what they recommended.

Both support reps I spoke with were helpful, ultimately taking control of my screen and watching the process fail in real-time. Their suggestion was to create another new Photos library and wait for it to finish downloading my photos from iCloud before making another shared album. And, if that failed, he recommended I erase my startup disk (after backing it up, of course), then reinstall Big Sur and restore my data.

It took two days to download the photos from iCloud to my Mac (yet again), but the problem remained. So, I backed up the disk, erased it, reinstalled Big Sur, and restored my data, but was still unable to create a shared album in Photos. Curiously, I was also unable to create shared albums on my iPhone or iPad.

There is one more thing: I thought perhaps my aging 2013 MacBook Pro was contributing to my woes, so I bought a new M1-powered MacBook Pro. It hasn’t solved the Photos issue (yet), but I’m impressed that I’ve had relatively few unpleasant surprises.

I’m out of space; I’ll tell you more next week.