“World Backup Day can easily be observed by spreading the word of data integrity and automatic backup. Share World Backup Day with all your friends and family. The virtues of both local and offsite data backup sites should be extolled. People should relay and take heed of the tales of devastating data disasters like the loss of an entire season of a children’s television series or the near complete loss of customer data by Microsoft’s & T-Mobile’s Sidekick. Even Pixar accidentally lost nearly 90% of the animated film Toy Story 2 to an errant computer command. So sad, all they needed was a proper backup plan that included regularly testing the data restores.”

In my first book, Dr. Macintosh (1989; Addison-Wesley), I said there are only two kinds of Mac users — those who have lost data, and those who will lose data. I’ve been saying it ever since. And, while I think many (if not most) people have gotten the message by now, some still have not.

Most of you have been reading my columns long enough to know I am a fanatic when it comes to redundant backups. In spite of relating the horrors of losing data at least once a year, I still hear from a reader or friend every month or so with a tale of woe and lost data.

It Ought to be Called World Backup AND RESTORE Day

Which is why, at least in my humble opinion, it should be called World Backup and Restore Day, since a backup isn’t worth the disks it’s stored upon if you can’t use restore your stuff.

The point is, you should not only back up your data, you should periodically test your backups to make sure you can restore files from them.

Furthermore, I propose we declare April 1 World Redundant Backup and Restore Day: No Fooling, to make sure everyone knows that one backup just isn’t good enough.

If you’re a nut about your backups like I am, please use this opportunity to start a discussion and help someone you love to keep their precious data safe. Remind them that a single power surge or lightning strike can fry your whole disk drive or your entire Mac in a heartbeat. Then remind them that they could lose it all—every photo, video, document, and other files on the disk—in the blink of an eye.

So, please spread the word. Remind your parents, children, friends, neighbors, and anyone else you care about that World Backup (and Restore) Day is around the corner and offer to help them create a trustworthy, redundant backup system.

I created a short public service video for this year’s World Backup Day. If your data isn’t backed up redundantly, or wouldn’t survive a fire, theft, hurricane, tornado, or other natural disasters, please take two minutes to watch it here. 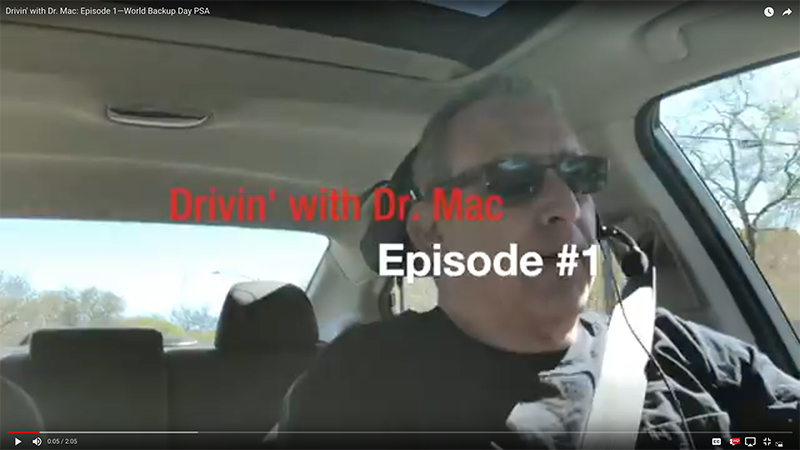 There is one more thing… I also lifted the backup lessons from my flagship 10-hour Working Smarter for Mac Users course and created a new 1-hour standalone course on backing up properly.

It’s called Working Smarter for Mac Users: The Backup Course and you can enroll for 0.99¢ here.

And that’s all he wrote.

You’re entirely welcome, Lee. Don’t forget to test your backups, too. They’re pretty worthless if you can’t use them to restore. 🙂

Thank you for the reminder. I have TimeMachine enabled, but I also like to do a Carbon Copy Cloner mirror copy to a different drive. I just did that and am in the process of cleaning out some big and unused files, old apps too, before I update OSX.