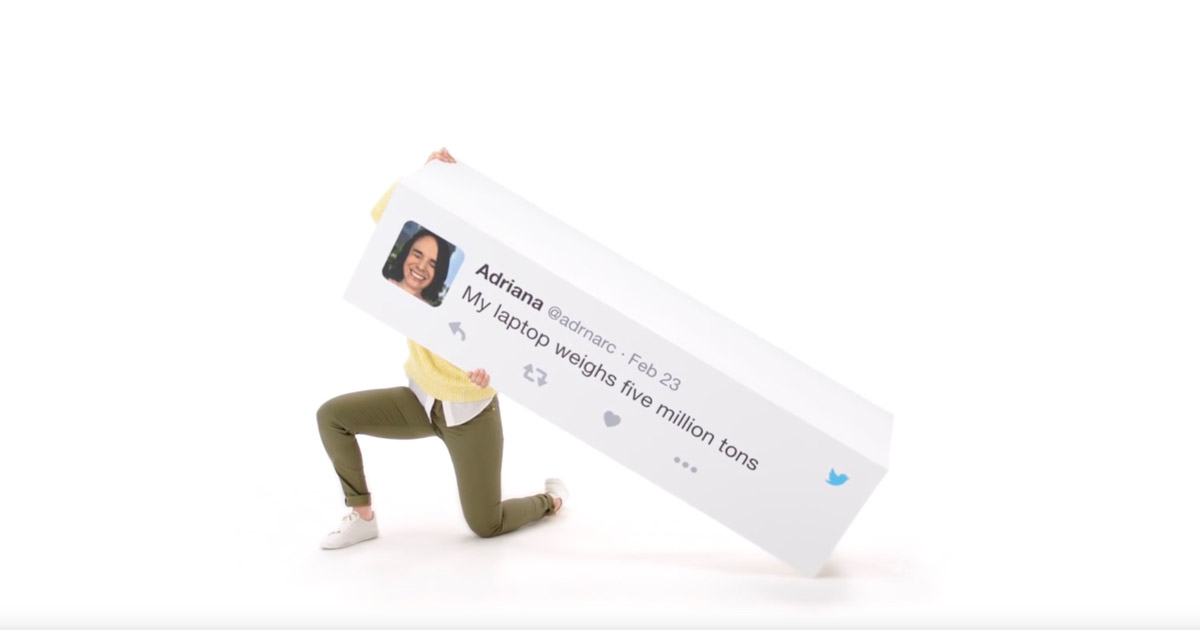 Apple published two new commercials in its iPad Pro series addressing laptop complaints. In case that reads too smoothly and it didn’t smack you upside the head, as we said when I was a wee lad, Apple is answering complaints about laptops with the iPad Pro. Not with MacBook Pro. Or MacBook. Or the legacy MacBooK Air that is still being sold. No, Apple is answering laptop complaints with an iPad Pro promotion.

Here’s the first one:

The new spots are part of Apple’s longer iPad Pro series, where Apple answers personified real tweets from real people. In past coverage, I’ve mentioned that I think It’s interesting that Apple is responding to real social media in its marketing, but that many of the commercials leave me feeling pretty meh.

Note that the target demo is likely younger than yours truly.

In earlier spots in the campaign, Apple has positioned iPad Pro as a device that can solve a lot of problems for people. Many of the scenarios Apple has addressed have been traditionally laptop-centric, but the new spots directly address complaints specifically about laptops.

It weighs too much and battery life sucks.

These are both themes MacBook and MacBook Pro are best suited to address. MacBook weighs nothing, and battery life on both Apple laptops are excellent.

But no. Apple is positioning iPad Pro as a laptop replacement for getting work done. I’m a huge iPad fan. I use my own iPad Pro (9.7-inch) for hours every day. I’ve argued there are places—like editing fiction—where iPad Pro enhances my workflow as an aspiring author.

But in my opinion, it’s not a laptop replacement for most productivity tasks. Or if it is a replacement for some people, it’s not better at doing the job than a MacBook or MacBook Pro. Your mileage may vary on that.

One reason these spots got my goat is that I want Apple to get off its corporate butt and release new Macs. I want iPad to be successful, too, but the day after Mac Pro turns 1,200 days old, these spots rubbed me the wrong way.

Meanwhile, there also was nothing compelling about the new Macbook Pro, relative to my existing 2013 Macbook Pro.

As with you, my iPad Air is fine for the needs. On the other hand I have a 2011 MacBook Pro and it is getting slow. I am wrestling with what to get, a new MBP or an iPad Pro. I am thinking that the iPad Pro would connect to my iMac and act as a drawing tablet when at home.

On the one hand, Apple still has the best tablet on the market. On the other hand…the market for tablets is not really what Apple hoped it would be. So Apple is trying to convince more people to buy tablets, and frankly, it’s not working. Part of the problem is, for what people actually use their tablets for, the upgrade cycle does not have to be particularly short. My iPad Air 2 is still absolutely capable of doing every single thing I actually care about doing with it…because that just isn’t very demanding. Some movies, some tunes, some reading, some… Read more »

Actually I don’t blame them for pointing people who don’t like laptop battery life to the iPad. Their record on battery life for the new MBP is not great, and in my personal experience, it’s abysmal. I think it would be a risky move on their part.