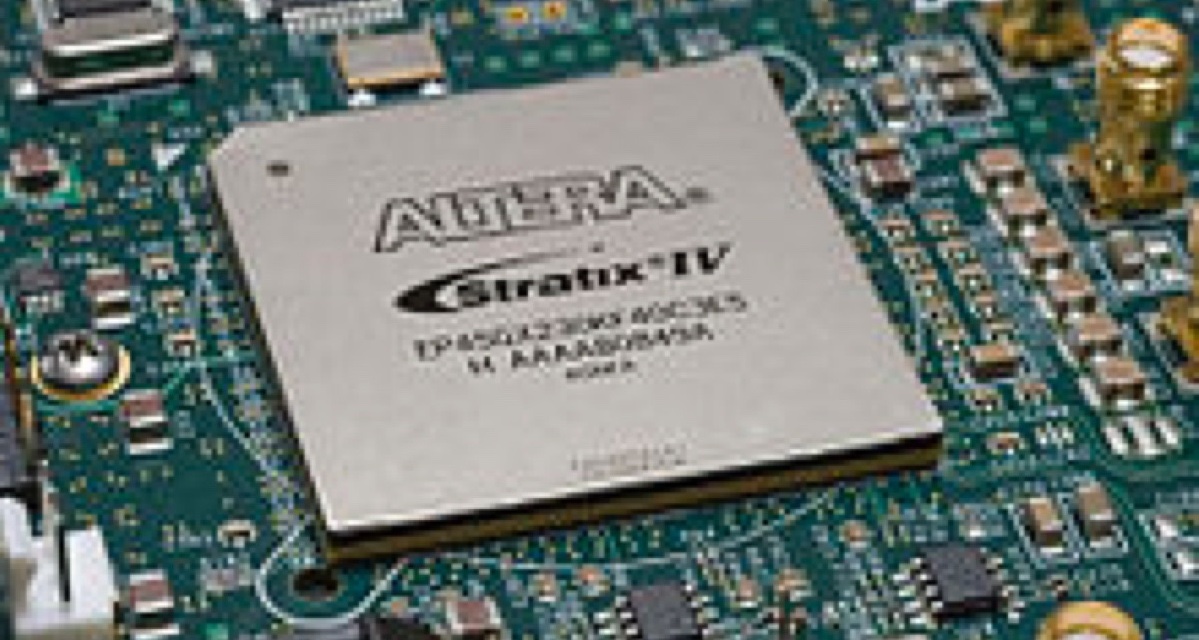 An intriguing chip has been discovered in the teardown of the iPhone 7. We know that it’s a field-programmable gate array (FPGA), but we don’t know what it’s intended to do. Speculation abounds, and John Martellaro thinks it my be for encryption.

The FPGA was noted in the bill of materials tear down by Chipworks back in September. Its part number is listed as “Lattice Semiconductor FPGA ICE5LP4K.”

An FPGA is an integrated circuit that works like an Application Specific Integrated Circuit (ASIC) but can be reprogrammed in the “field.” That suggests that Apple wants to be able to change specific, low-level, programming logic at the hardware level if necessary.

This Forbes article notes that the Galaxy S5 in 2015 had one, but it was dropped from the S6.

That article also notes that Microsoft “… has been investing heavily in making its own custom FPGAs to boost the artificial intelligence capabilities in its data centers.”

A Matter of Scale and Encryption

However, just because Microsoft is using FPGAs in its AI research data center, it doesn’t follow that an FPGA in an iPhone will be used for AI/Siri. Although it could, my own hunch is that a single FPGA in an iPhone isn’t going to have the scale required to implement the massive heuristics required for AI. If Apple can’t implement what it wants in Siri now, a small FPGA isn’t going to push Siri to the next level.

My own guess, and it’s just that, is that an FPGA would be a good place to implement encryption code that cannot be accessed or modified by malware from iOS and which can be updated in the future as needed. The state of the art is continuing to advance with encryption code, and many iPhone 7s can likely be expected to still be operating in 2019-20.

Given the resourcefulness and intent of both legal and illegal attempts to break into an iPhone, for a variety of reasons, it would seem sensible for Apple to grant itself some flexibility in this arena.
Again, this is a hunch, but it sounds a lot more reasonable to me than artificial intelligence, which requires grand scope. I could be wrong. I probably am.

Clever researchers will likely be on the case, and we may know more soon.

A lot of confusion here as to what a FPGA actually is. They are not a class of processor instead they are programmable logic programmed often in a hardware description language. Although high level sythensis from C / C++ is possible with a device this small it would not be used.

When one looks at the resources provided by the lattice device I would suspect it is being used as some form of glue logic or hub.

Is it programmable from software running on the iPhone? FPGA processors are designed to run in a protected mode. During the boot process, it can be initiated with an IPL (initial program load) or use the default program assigned. Then to run the code on the FPGA you have to flip a bit which makes it a read-only processor. Once the computer is running, it cannot change the FPGA. Apple can change the boot code to update the FPGA, which it will probably do. These chips are usually added to supplement hardware processing. While I think @BurmaYank’s conspiracy is cute,… Read more »

Just how much processing power / storage does the FPGA actually have ?

Could Apple be using the FPGA as temp non-volatile storage ?

webjprgm said, “What I don’t know is … whether it needs special hardware that is not on the device in order to reprogram at all.”

If  is building a backdoor here in this chip for the FBI & NSA & MI6, etc., which only works with proprietary hardware, it might be considered still “secure” as long as only  had the hardware, but soon, necessity would make  surrender the hardware to the Chinese government, if  wanted to sell its products in China. And that would be the first domino.

Is it programmable from software running on the iPhone? You imply that it is not by saying it could hold encryption code beyond the reach of software running in the OS. But to do a standard over-the-air (or iTunes) iOS software update that included updates to encryption code you’d have to be able to program the FPGA from software. If programmable from software, then it doesn’t have to have a single dedicated purpose but could be reprogrammed to be used for one of several purposes depending on what the phone is doing at the time. What I don’t know is… Read more »