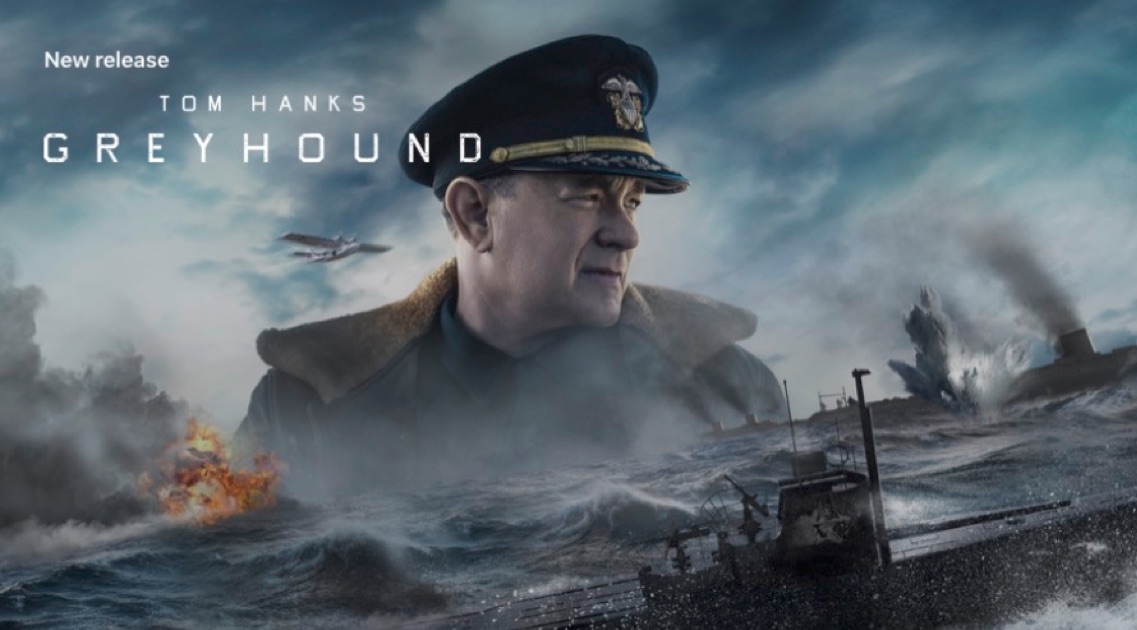 I’ve read multiple reviews of the new Apple TV+/Sony Pictures film Greyhound, but most critics didn’t really understand it. So I want to offer some thoughts, from both a military and dramatic perspective.

In an inside look at the movie, Tom Hanks tells the story of Greyhound. It’s based on the 1955 novel The Good Shepherd by C. S. Forester. It’s the story of early WWII in which critical supply convoys of merchant ships depart from the the U.S. and head out for a perilous 50 hour journey to Great Britain, escorted by Allied warships. Nazi U-boats, in wolf packs, await. This movie centers on one of those convoys.

U.S. Navy Commander Ernest Krause (Tom Hanks) is on his first such mission, captain of the lead  escort, the destroyer USS Keeling, assigned with the responsibility of protecting the convoy. An extended battle with a U-boat wolf pack is the focus of the film.

As an aside, a more extensive historical work on these convoy missions  that I recommend is the 2011, non-fiction Turning The Tide, Ed Offley. See my remarks at Friday’s Particle Debris.

I won’t get into the customary plot and character summary. That’s easy to find elsewhere. What I want to comment on is the reaction to the film in some quarters.

The feeling I got from most reviews was that the reviewer had no military experience and, as a result, confused the character of the action with that of modern, fictional super hero movies. And because Commander Ernest Krause (Tom Hanks) is a mere mortal (of 1942 vintage), and because the action is constrained by 1942 technology, the movie doesn’t, they surmise, go big enough.

That, of course, is nonsense. The action, the stress on the crew, the brilliant seamanship, the doubts of the ship captain, Commander Krause, the grim realities of injuries during battle are all woven into an effective action drama, accentuated all the more by a crisp running time of 91 minutes. Those who have been there and lived it understand. Things like this really happened, and, at times, got a lot more gruesome.

For example, see: “The Last Stand of the Tin Can Sailors.” which tells the story of the legendary (1942) Battle off Samar.

Another gripe from critics is the lack of character development. As Tom Hanks, explains in the video linked above, the movie puts the technical action under a magnifying glass so there’s little time for a cast of characters to “develop” — only react as trained.

The only important character development is really that of Commander Krause. We see that at the end of the movie when the convoy pulls into friendly waters at last, after days of horrendous warfare, and the British Admiralty asks how many convoys Krause has escorted. Krause affirms that it was his first.

How’s that for character development?

The film is fairly well done from a military and technical standpoint. But I caught a few things to quibble about.

General quarters klaxon. During WWII, U.S. warships used a echoey Klang…Klang…Klang alert for general quarters. Not, as in the movie, the throaty “ahh-ooh-gah” sound. That was used, however, as the dive alert on U.S. submarines. A nit.

Torpedo wakes. The waters of the North Atlantic in bad weather are dark and choppy. I am strongly suspicious of the ability of a bridge lookout to detect a torpedo wake in time to steer even a nimble destroyer into a head-on miss. And Kraus did it several times even when boxed in by two U-boats in a cross-fire. Strained my credulity. But it made for great drama.

U-boat surfacing. One time, a U-boat surfaced and engaged in cannon fire against both a British destroyer and the USS Keeling. That’s pure suicide, seldom if ever attempted by U.S. submarine captains in the Pacific. When I watch the movie again, I’ll look for a rational. Perhaps depth charge dammage forced a last-ditch, suicide surfacing. After all, the German crew had an Enigma machine to protect — or allow to be destroyed.

My studies of WWII naval warfare tell me this was an authentic depiction of this kind of combat. But the authenticity of the action and ship command protocols never got in the way of effective and exciting story telling. I believe it’ll come to rank near the top of naval warfare films for a long time to come. Mr. Hanks and his team have done a terrific job.