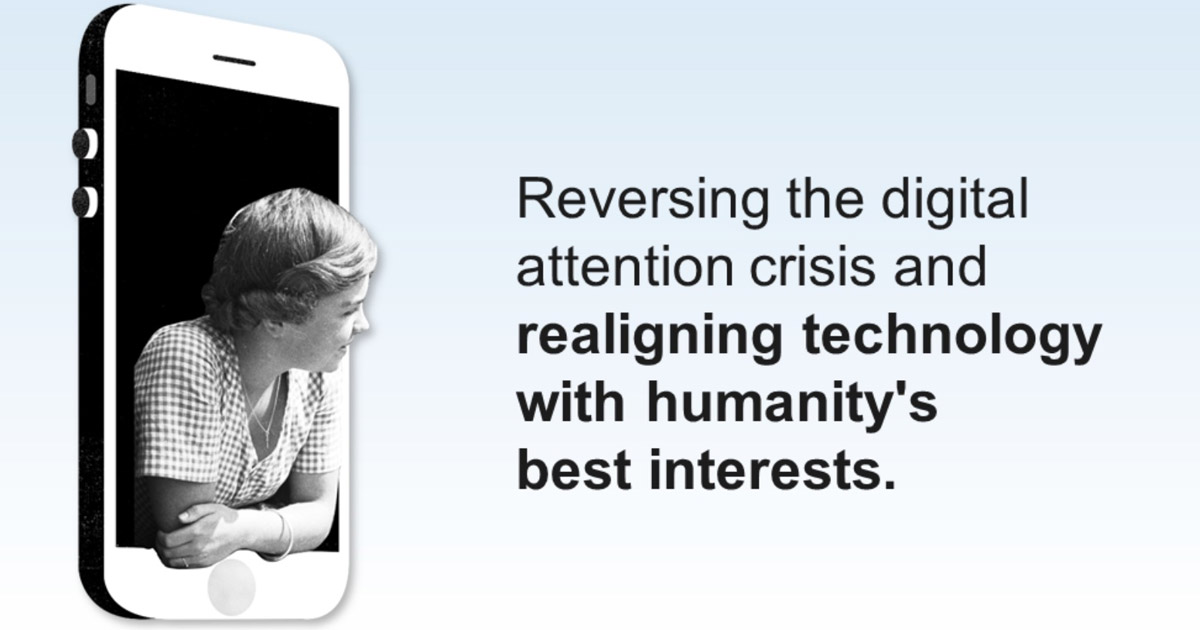 There’s a group of former Facebook and Google employs who are all kinds of freaked about about how their former companies are engineering their services to be addictive. They’ve formed an organization called The Center for Humane Technology, a lobbying and education outreach effort designed to affect change in technology.

Former Apple PR team member Lynn Fox is involved in the project, too. Unlike Facebook, Google, Twitter, and Instagram, Apple isn’t named as part of the problem in The Center’s messaging. Apple is, however, referred to a few times as a company that could be part of the solution.

From the organization (original emphasis):

Facebook, Twitter, Instagram, and Google have produced amazing products that have benefited the world enormously. But these companies are also caught in a zero-sum race for our finite attention, which they need to make money. Constantly forced to outperform their competitors, they must use increasingly persuasive techniques to keep us glued. They point AI-driven news feeds, content, and notifications at our minds, continually learning how to hook us more deeply—from our own behavior.

“We were on the inside,” Tristan Harris, a former in-house ethicist at Google heading the new group, told CNBC. “We know what the companies measure. We know how they talk, and we know how the engineering works.”

And that kind of talk has to have the social media companies concerned. I mean, it should give them a wake up call, but instead they seem likely to want to fight, rather than see it as an opportunity to rein in their quest to suck up ever more of our time.

The Center is getting mainstream press attention (CNBC, Time, NY Times, USA Today. etc.), though it seems their battle is an uphill one. For instance, the problem the group is fighting—addiction to social media and technology as a whole—is largely a problem people love having. We aren’t hearing too many individuals says “I spend too much time in my iPhone or Android device,” though there is mounting concern from groups like The Center.

The Truth about Technology Campaign

The Center is teaming up with Common Sense Media to launch a multimillion dollar campaign called The Truth about Tech aimed at children. Why? Because the social media companies themselves are targeting kids.

“The largest supercomputers in the world are inside of two companies—Google and Facebook—and where are we pointing them?” Mr. Harris told CNBC. “We’re pointing them at people’s brains, at children.”

Pointing out the Problem and Offering Solutions

On the one hand, The Center points out what it calls The Problem, in great detail, saying:

But they’re also offering what they call The Way Forward, saying, “Humane Design is the solution.” That includes a variety of tips to help users Take Control of their devices.

Highlights include turning off notifications except for those generated by the humans in your life (i.e. turn off Facebook notifications, but keep iMessage on). They also recommend setting your device to grayscale to avoid being manipulated by colors and notifications and limiting your home screen to only apps that important tools. Their examples include: “Maps, Camera, Calendar, Notes, or Lyft.”

There are many, many more tips.

I’m curious to see if and how Apple reacts to this. Lynn Fox is an Apple PR veteran (as well as working at Google and Twitter), and she likely has communication channels to Apple’s leadership one way or another.

I don’t believe in overuse [of technology]. I’m not a person that says we’ve achieved success if you’re using it all the time. I don’t subscribe to that at all.

There are are still concepts that you want to talk about and understand. In a course on literature, do I think you should use technology a lot? Probably not.

And he went so far as to say:

I don’t have a kid, but I have a nephew that I put some boundaries on. There are some things that I won’t allow; I don’t want them on a social network.

All of which says that Mr. Cook might well support the ideology of The Center for Humane Technology. So far, however, Apple hasn’t made a statement.