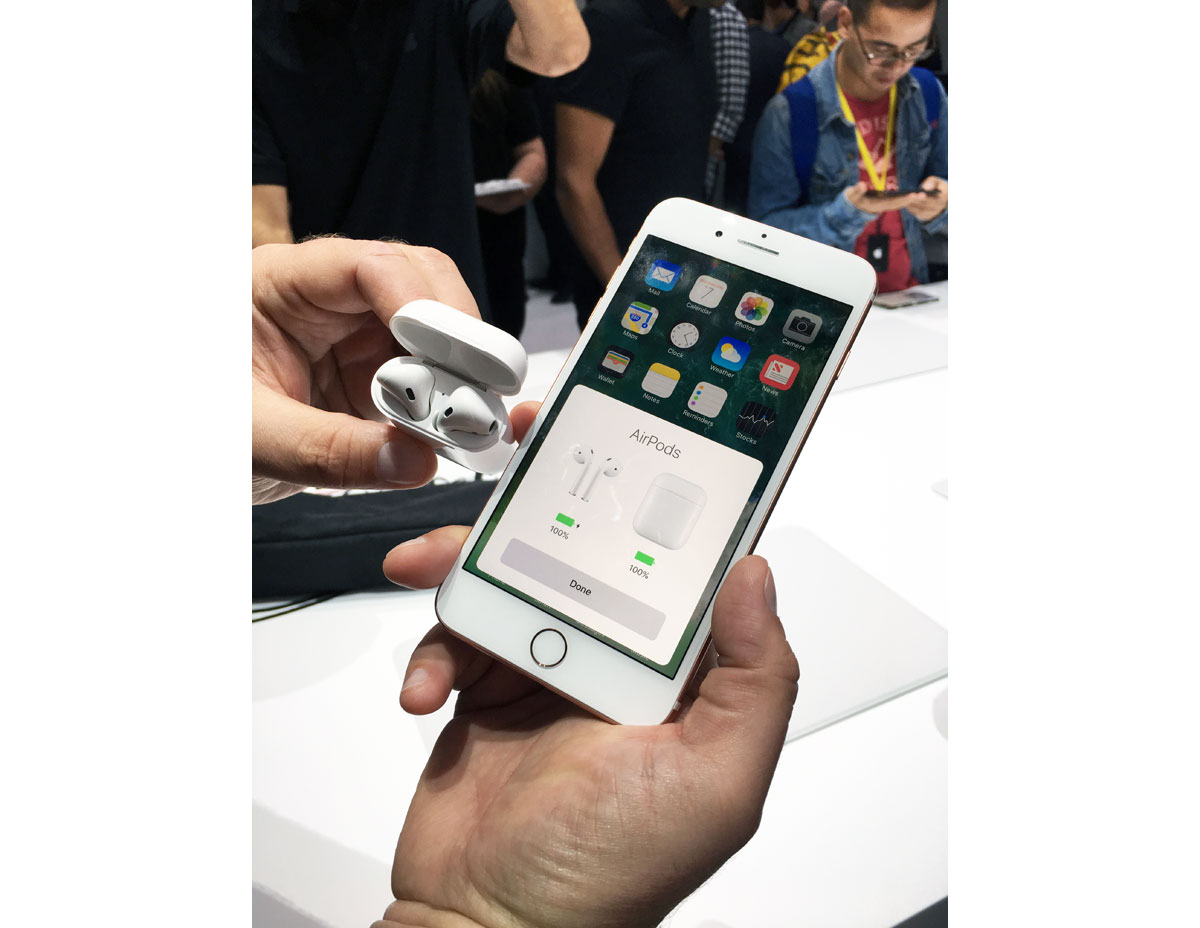 I went into Apple’s hands-on press area a skeptic of the company’s new AirPods wireless headphones. I came out impressed. Here are my immediate impressions.

The pairing process is simple, automatic, and slick. When you hold a pair of AirPods near your iPhone, a pairing option automatically pops up. Tap one of the options and you’re done. From then on out, those AirPods will pair to whatever Mac, iPhone, iPad, or Apple Watch you’re using. That’s it.

Apple clearly identified Bluetooth pairing as a pain point for consumers and fixed it. It’s also partly courtesy of the W1 processor Apple designed for these things.

AirPods sound good. The caveat is that I was in an noisy, crowded room listening to someone else’s tunes. It was Sia, for those keeping score at home. The sound was crisp, deep, and good. We’ll have to wait for proper testing to say more.

Put AirPods in your ear and sound transfers to them automatically. Cleverly, if you pull one out, any music you have playing will pause.  That’s such an Apple touch. If someone else did it first, drop me a note in the comments.

You can also double tap an AirPod to bring up Siri. There’s no button, but Apple is doing some magic with the microphone to recognize the taps. That’s stupid awesome.

They last up to five hours of use on a charge. They charge by dropping back in their case, which has its own internal battery for additional power on the go. You can charge the case and the AirPods at the same time.

I’m not a fan of wireless audio when given a chance. I also think Lightning is just fine for wired audio. But the AirPods were impressive. They’re easy to use, sound great, and have the kinds of intuitive features you expect from Apple even if you aren’t looking for them.

No Ron it did not.

I second that sentiment as well, Lee. Very funny. But your comment yesterday about AAPL being up after a launch did not seem to carry over to today. 🙁

Glad that I helped make your day.

Lee, I was having a marginally crappy day until I read your ear-piercing comment. You win the comment section today.

My question is once they are linked to your Apple ID, as they seem be. Can you change to listen on someone else’s device. Or are the days of someone saying “Hey, Man, check this out..” and plugging in your headphones gone? Also limits sharing between friends/family with separate Apple IDs. My kids are constantly grabbing my headphones for their iPhones.

“Will there be ‘Find my AirPod(s)’ capability?”

Just get your ears pierced and put the speaker extension of the AirPods through the hole. 😀

Will there be ‘Find my AirPod(s)’ capability?

I found the list of devices the AirPods are compatible with at:
http://www.apple.com/shop/product/MMEF2AM/A/airpods

Another thing I am curious about is the wireless range of the AirPods. The tech specs section says “AirPods: Bluetooth”, so I would assume that means the normal wireless range for Bluetooth of 20 to 30 feet. It does not say which version of Bluetooth the AirPods have, it just says Bluetooth.

Vaughn those silicone covers were great! They offered the right amount of enough sticktion.

Thanks Bryan. I and others have concerns about losing them. I wonder their weight compares to existing earbuds. There is a battery inside so they must be at least a bit heavier. Anyway, I could take a ratty pair of my old earbuds, cut the cable and do some trampoline flips, Getting back to Vaughn’s comment, I suspect that someone will come out with a device to help anchor the AirPods. I have a little silicone thingy on my generic phone Bluetooth.

“There’s no button, but Apple is doing some magic with the microphone to recognize the taps”

Per the presentation they are using the accelerometer to detect taps. Or maybe a mix of both, if I didn’t hear it right.

Will this work on iOS devices prior to the new iPhone 7?

They stayed put in my ears, but it was FAR from a proper testing environment.

As I recall, before Apple switched to the ‘in ear’ design, there used to be aftermarket attachment with silicone cushions. It’s a safe bet someone will market snug molded pieces a) prevent bad fit (and loss) giving b) comfort and sound improvement in the process. It’s po probably a matter now of avoiding interference with the IR sensors and whatnot

My issue with Apples ear buds, as well as all solid ear buds is fit….. For me, they don’t. I much prefer the silicon buds with the conical rings… They seem to fit more comfortably and securely as well as having a better seal.

Bryan, how did fit? Especially in regards to staying put?