Panos Panay, Microsoft’s hardware VP began to look at this dilemma and basically said, “Look. You’re going to touch your future computer. Either with your fingers or a stylus. How can one get any serious work done without a big display, ports and a full-fledged OS that can run legacy desktop apps?” Panay solved the problem Apple failed to address. 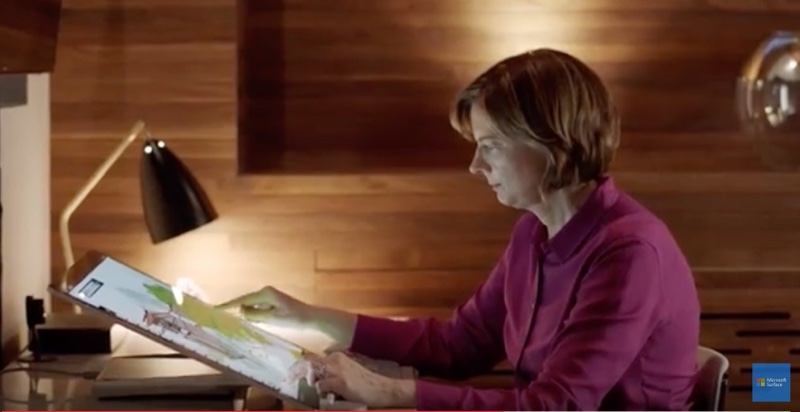 This freezeframe from the YouTube video told me everything I needed to know.

The vision was revealed on October 26, 2016. In my reading, the visceral response to this lifting of limits was:

Of course, just as we have smaller iPads, Microsoft has the smaller Surface Pro and Surface Book for extreme mobility. But the problem that lingered, the specter that haunted Apple, was solved. Independent of trends in mobility, Microsoft figured out the future by having a single OS on a wide range of touch sensitive display sizes.

Now imagine how the iPad unleashed might evolve. We’d still have small, limited iPads. But. Imagine an iPad with a 28-inch display with multiple, overlapping windows, USB-C, simultaneously running iOS and (recompiled for AIM or a Rosetta-like solution) macOS apps with BT mice.

We can’t get away from a built-in display, like the early Mac did, because of the dependence on the human touch and system integration. But in every other regard, such an iPad would be, in my mind, superior to the legacy Macs. Just as we transitioned away from the Classic Mac OS (9), a family of large screen iPad Pros, ranging from 7.9- to 28-inches (or more), could make MacBook Pros (and maybe desktops) obsolete.

Apple has a profitable business with MacBooks. To fully unleash the iPad of the future means dramatic change. Apple would be competing with itself in a manner so extreme, even the most cannibalistic Apple executive would cringe.

I remember when Steve Jobs abruptly cancelled OpenDoc in 1997. It shook and enraged the developer community. Later, Apple announced that there would never be 64-bit Carbon APIs. There was developer pandemonium. But that historic, relentless devotion to making forward progress has guided Apple well.

Tim Cook has said, “The iPad is the clearest expression of our vision of the future of personal computing.” However, like the early Mac, self-imposed limits on the iPad are making this future impossible. Meanwhile, iPad sales decline and the future of the Mac is constantly being questioned. Stalemate.

Making the iPad not just equal but dramatically superior to the Mac is the visionary goal. Can Apple make that happen?

iOS and ARM are toys compared to Mac and x86 computers. And x86 is required for full and true compatibility with the rest of the world (read, 95% of Windows market share of true-full computers worldwide).

Bring a Mac tablet. Now it is possible with the new and future Intel microprocessors. Competitors like Microsoft have demonstrated it.

NOT HAPPENING with TIM COOK at the helm………. Tim Cook as ZERO vision or tech smarts to make things happen……. he’s a bean counter that was a temporary stand in for Steve Jobs (who did not plan on kicking the bucket at the time) ……….. Apple is in trouble…….. big big trouble

I think John has something right and something wrong. When it comes to built-in display being limiting. Isn’t that the same issue with a Mac Book Pro. You can use an external display with an iPad. You can not touch it. But that is not the point When it comes to single window for apps, that is only an issue for larger displays. How many people view multiple windows on a 13″ MacBook Pro? When it comes to multi-user accounts how many people have multiple user accounts for there MacBook Pros? iMacs, yes. Portable laptop less so. (Exception when you… Read more »

tedlandau: Ted, thanks for chiming in. I agree with you completely.

geoduck: “What if Apple intends to evolve the iPad with a separate padOS with the capabilities you mentioned above. This would REPLACE the Mac and would BE ARM based.

That is an excellent point. That is exactly what I think Tim Cook means when he says he sees the iPad Pro as the clearest expression of their vision of the future of personal computing.

Just had a thought.
Suppose the idea for an ARM Mac is totally off base. Assume Apple has no plans to move the Mac away from Intel.
What if Apple intends to evolve the iPad with a separate padOS with the capabilities you mentioned above. This would REPLACE the Mac and would BE ARM based.

Yup. Tooting my own horn a bit here, I made pretty much the same comments back in 2013. http://www.macworld.com/article/2028968/why-the-ipad-still-cant-be-a-true-mac-replacement.html
And I recall discussing yet other points (like how you can’t develop iOS apps on iOS devices) during several podcasts with Chuck Joiner at the time.
Not much has changed since. My iPad Pro is a much better laptop replacement than my 2013 iPad ever was. But it is still nowhere close to being a complete Mac alternative. My iMac still rules.

If the iPad is going to evolve in a way that will make eligible to replace the Mac maybe Apple should consider naming it a different species of apple.
With a new name fewer expectations and more possibilities.

I really thought we had got beyond the ‘one type fits all’ approach by now but clearly, John, you don’t think so. Surely we have reached a stage of maturity that for some a smartphone suffices, where for others a PC is mandatory. My read of the Apple strategy isn’t one of wholesale replacement of the Mac market with iPads. Rather it is provision of a variety of devices to meet slices of the broad marketplace. For me I find that, after spending 50+ years in computing, what I’m most interested in are these; 1. A take it with me… Read more »

I find it a bit unfair to measure the iPad by Mac standards and then find it falling short. Matter of opinion. Yes, they’re both computing devices. But they are aimed at performing different roles in Apple’s ecosystem. Like spoon and fork, or whatever the better comparison to matters outside that system. The selling points of any tablet are, according to me: – easy change of orientation (I tried reading a portrait-oriented document by rotating a netbook, next day bought my first tablet.) – featuring a suitable input device if needed (an on-screen text keyboard if you want to compose… Read more »

One could argue that Apple has done a poor job of making iOS take full advantage of what iPads could do, especially under a “Pro” guise. It was encouraging to see iOS 9 finally pay some attention to making use of the extra screen space. iOS 10? Any progress was stopped dead in its tracks, and the biggest news are the new frills added to iMessage, which, incidentally, also made it harder to use for those who just want to send text messages. Look at the Springboard layout on an iPad Pro, and you gotta think, “really?” The same grid… Read more »

Great article and analysis John. Now if Apple would just have the courage to keep evolving either or both by some leaps and bounds instead of micro baby steps, they might actually get it and get there.

geoduck: Thanks for a well spoken expression of the problem from a customer viewpoint.

Well said. You nailed it. In 2012 when I got my MacBook Pro I stated publically, here and elsewhere, that it likely would be my last Mac. I EXPECTED the iPad to be far Far FAR more advanced by now than it is. So last November when it came time to replace The Beast what did I do? I got an iMac. The trouble is, as much as the iPad has evolved it is still crippled. The six items you listed are the core of the issue. You add those things and the ability to drive an external 28 inch… Read more »