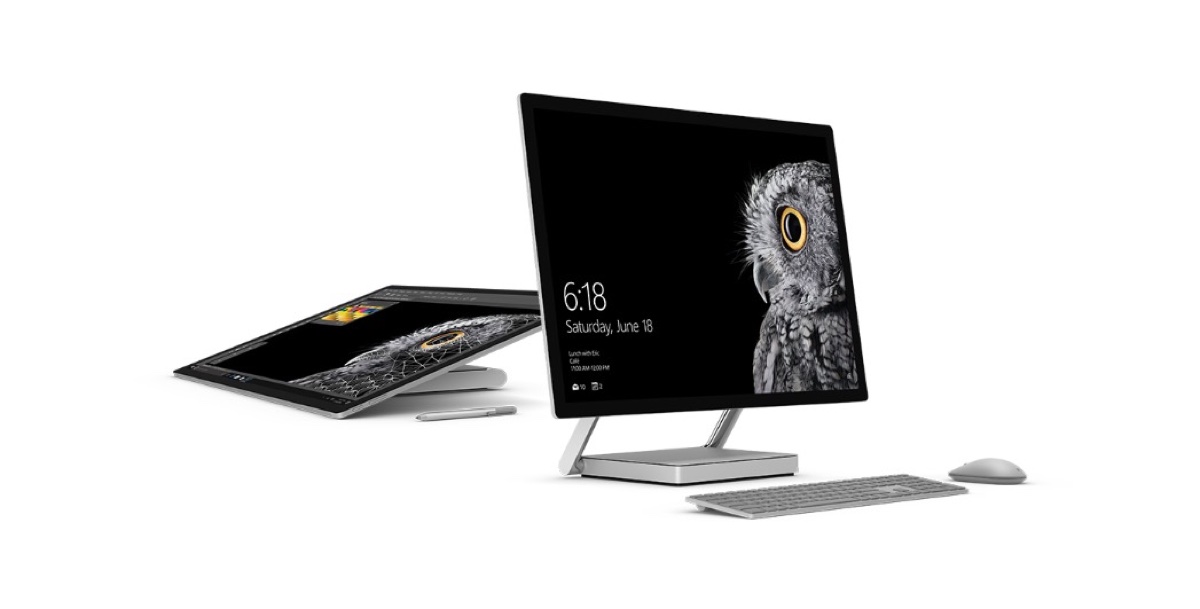 Microsoft has just announced the Surface Studio, a 28-inch All-in-One computer with a Skylake Processor and a touch sensitive display that tilts. The design, operation and concept of this computer is basically a giant iPad, the iPad I always dreamed of.

I will be the first to admit that my fantasy for the ultimate computer may not be commercially viable. Even so, I’ve always had this feeling that the iPad of the future would eventually be my work computer. It would be a descendant of my Mac Pro today and its 34-inch HP display.

This future iPad would have a 36-inch (0.9 meter) display on a tilt so that I could rest my arms on the desk and create content, via touch and speech. No more “gorilla arm” effect, something Steve Jobs was adverse to when it came to the idea of reaching out to touch screen Macs. When Apple inched along to a 12.9-inch iPad, I thought, maybe this would be the start of that progression.

My fantasy has lately been further ignited by this futuristic, fictional computer used in the 2011 TV series “Terra Nova.”

That’s the design that has percolated in my brain for years.

For a long time, I always felt that Steve Jobs had a technical vision that he forced down the chain. He knew what he wanted, and he made it happen. That was true for the iPod, Mac OS X in the early days, the iPhone and the iPad. These products were all commercially viable as well.

Lately however, even though Apple is in a mature phase, generating a lot of revenue and earnings, there’s been a certain lack of technical excitement. As Kelly Guimont describes it, “No MacBook Air pulled from the manilla envelope” moment. We have the same old iMacs and the same old MacBook Pros, and the same old iPads. Marry that with an agonizing delay (the past 500-1000 days) in the introduction of new Macs across the line, and one has the making of a serious technical vacuum created by Apple.

I wrote about this first here: “Hewlett-Packard Seeks to Exploit Apple’s Inattention to Technical Professionals.” Now, Microsoft is joining the fray, moving in aggressively to cater to the creative and technical professionals. This photo (below) of the Microsoft Surface Studio particularly ignited my interest and passions because it fulfills my own vision for how the next generation desktop computer should work.

None of this could have happened if Microsoft had a shoddy OS to put on its new computers. But Widows 10 has come a long way since the dreadful Windows XP and Windows 8. Microsoft learned from its mistakes. Today, a technical or creative professional can get serious work done with Windows 10, Windows apps, and the supporting business infrastructure and development tools provided by Microsoft. To be sure, I’d prefer Linux. And Xcode on an iMac is awesome, but what if your company is into Java or C++ for the enterprise?

Apple has only itself to blame here for de-emphasizing the UNIX underpinnings of its macOS, going flat with real creativity across the product line, becoming complacent in the Mac upgrade cycle, and focusing to extremes on mobility. With sales of both Macs and iPads declining, can Apple afford not to be the leader in every market?

Just as car companies have Halo cars, computer companies need Halo computers. These are the very best money can buy. They inspire the customer base. They demonstrate what the company is capable of. The designs inform the thinking about less expensive computers in the lineup.

I don’t know how financially successful Hewlett-Packard and Microsoft will be with the new products I’ve written about, but it’s enough that they will have the attention and delight of the professional and creative market. These efforts suggest enthusiasm, attentiveness and, most of all, technical leadership.

Apple has hereby been challenged. It will be interesting to see what the company shows us on October 27th. Will we be be dazzled? Will Apple reassert its leadership? We’ll know soon.