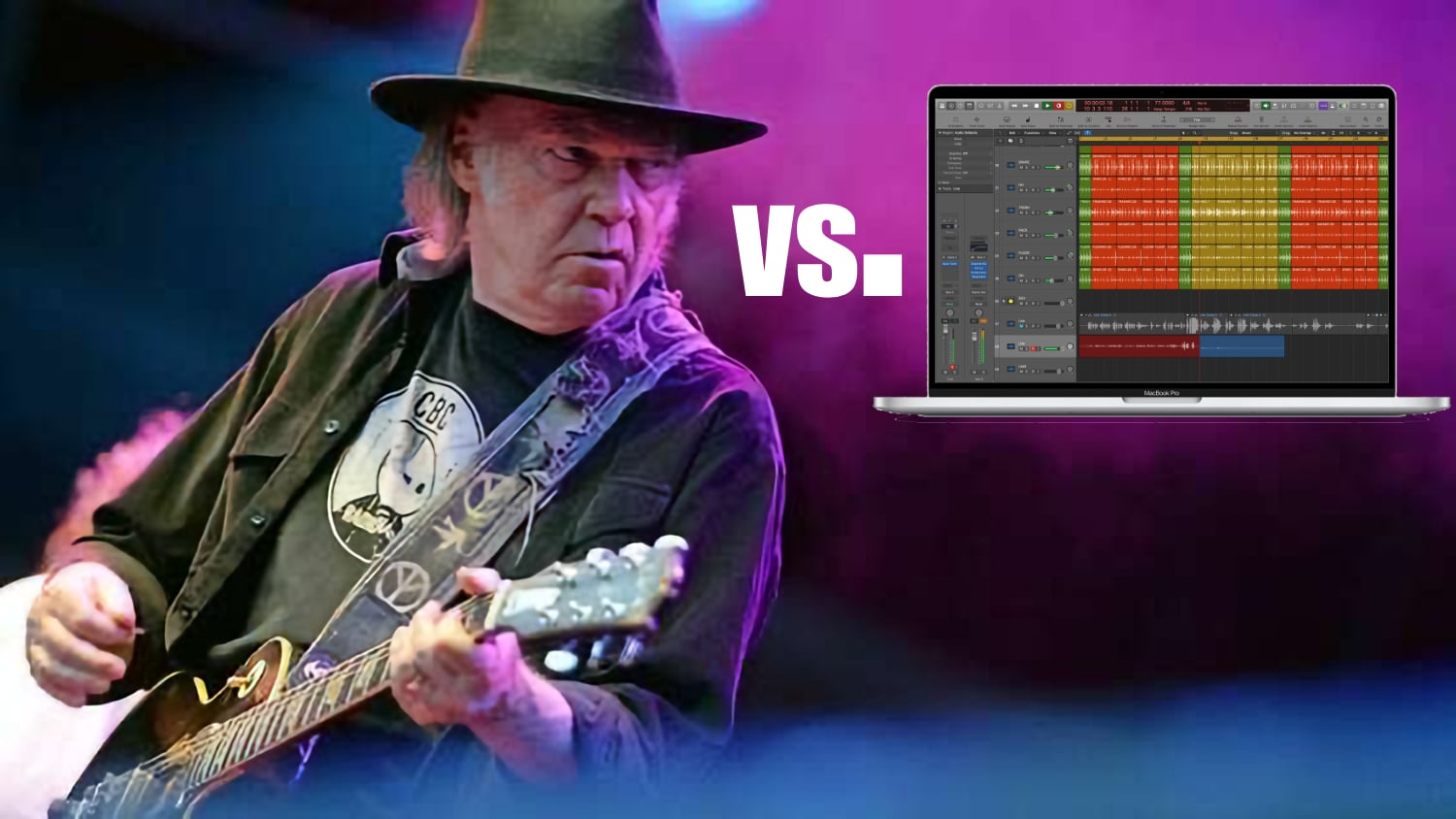 As you’ve probably heard by now, Neil Young recently got on The Vergecast and called the MacBook Pro’s audio capabilities “Fisher-Price quality”. While preparing to discuss my thoughts about this for today’s Mac Geek Gab 800, I decided I probably needed to share them in written form, too. I wasn’t planning on publishing anything, as so many other smart people (Jim Dalrymple and Jason Snell among them) have said all the smart things I thought needed to be said.

But I realized that there’s another angle to approach this from: one of compassion; one of trying to understand where all this comes from. I was never really a Neil Young fan. Quite frankly, I don’t like to hear him sing. I appreciate his place in the history of rock-and-roll, of course, and his songwriting abilities are not-to-be-challenged. I just don’t want to be the one hearing him sing those songs, you understand. Given the rant I delivered on today’s Mac Geek Gab, perhaps there’s not much I want to hear from Mr. Young. 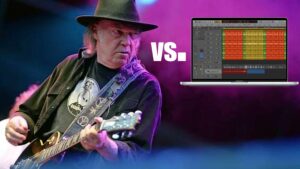 This isn’t the first time Neil has been in the technology news. Years ago, he and famed-producer, Bruce Botnick, were hawking their (now-defunct) PonoPlayer to us music-loving geeks, trying to explain to us why playing music back at bitrates and sample rates far beyond the realm of human hearing mattered. In a conversation I had with him about it at the time, Botnick made liberal use of the phrase, “as the artist intended.” Confirmation bias is really what that was (and is) about: if you believe something sounds better because of some external factor, your brain will actually perceive it as sounding better, and you’ll enjoy it more.

But Neil Young’s most recent comments about the MacBook Pro are more about purity … and relevance. As an aging human who is still lucky enough to be actively aging, I can relate to the concept of relevance! And there are two ways to approach it: waxing poetic (and clinging to!) the things that you did “way back when”, or embracing change and evolving with the times.

Neither of these approaches is wrong, mind you, at least not all the time. Sometimes the only positive thing you can say about the “new way of doing things” is that it’s new and will continue to evolve into something (hopefully) better. If you go in with that assumption, though, you’ll often miss out on the ability to see the benefits of change and evolution.

What bothers me about Neil Young is that he’s a mess of contradictions. His Pono player was all digital, all the time; “state-of-the-art” one might say. One might also say the same about the new 16″ MacBook Pro, as long as that one isn’t Neil Young. To Neil, the MacBook Pro is “a piece of crap … Fisher-Price quality.”

When Neil Young was in the studio in the 60’s and 70’s – his golden years, if I’m to intuit his recent ramblings correctly – he was using the state-of-the-art components of the time. On those early records, I would presume that Mr. Young didn’t have much say about the technology that was being used: he was just lucky to be there and have the chance to record his music for others to hear. I dare say that if digital were available at that moment, it would have been used by whatever engineers were recording him: if the engineers at Gold Star and Columbia Studios used a 2019 16″ MacBook Pro to record that album (in 1966!), I am certain Neil Young would’ve equally loved the career and lifestyle that resulted from those recordings being shared with what-would-come-to-be his adoring fans. And he would probably say very positive and even (anachronistically) nostalgic things about that MacBook Pro.

Putting all this together, I feel Mr. Young has conflated his quest for purity with his desire for relevance, finding it hard to let go of the past and adapt to the present. And that’s without getting into the fact that Neil Young certainly doesn’t hear as well as he used to hear.

To paraphrase another great songwriter: I hope Neil Young will remember (no he won’t). This geeky man don’t need him around, anyhow*.

*I hope Neil Young continues to live a long and prosperous life. But if he’s just going to be poo-pooing all new tech that isn’t his, best if he stays out of the limelight when doing so. Focus on the positive, Brother Neil. That has served you well in the past.

Dave, thanks for the studied response. I started on a Scully 12 track in the late 7os and use Macs these days.

@quakerotis Thanks for saying that! And Neil is right… for Neil. My issue is when he starts spouting his (completely valid) personal opinions as facts for everyone to follow. That’s where he (continually) gets my hackles up.

But as Paul Kent noted during a related discussion on our Gig Gab Podcast this week, if we want Neil Young the edgy songwriter, we necessarily have to accept that Neil Young the misguided technologist is around, too.

Yeah, I mean no disrespect to Neil, but he has his expertise and I have mine. If you read TapeOp Magazine in the issue before this one, https://tapeop.com/interviews/134/mark-howard/ you Cana see how convoluted our idea of what “great” sound is.

Personally, I’m tired of experts telling me what something should sound like.

Forget 24/192 (though you can get 24/192 over USB and many professional audio setups use audio over Ethernet.) 16/44.1 CD quality with good mastering sounds fantastic. I just want the real bits from the CD (Apple Lossless format would be fine) so I don’t have to buy a physical disc ever again. 🙂

p.s. It’s been more than 10 years since Steve Jobs rolled out iTunes Plus.

I’m not a musician and so don’t know what is involved with attaching amps et.al. to a computer, but can’t the interface go through USB? Seems like USB-C would have plenty of bandwidth for whatever level of audio one wanted to use. The 16” MacBook Pro has four of those.

Absolutely, and most folks that care do that (or via thunderbolt or PCI) for high end audio stuff. The thing is, back when Neil talked to Steve maybe adding in components that could do 24/192 were more expensive/difficult to deal with. Today, it’s way easier and cheaper.

There is no reason that in 2006 the Mac Pro came with in/out for mic, line, and optical, and the $15k “pro” Mac Pro comes with must a mic port. It’s kind of insulting, IMO.

I tend to agree with John that in 2020 adding support for 24/192 should be very cheap. Although there are sometimes issues with inaudible high frequencies interfering with lower frequencies during D/A conversion and playback through normal amplifiers/speakers/headphones, the extra headroom of 24 bit can be audible, and the higher bandwidth might possibly help with reducing harmonic distortion for transcoding and professional mastering.

Dave: Nice thoughts, man. Although you focussed on compassion, they were also smart, particularly those concerning confirmation bias and how it works. As you’ve pointed out, not for the first time has Neil Young irked a community; Lynryd Skynrd amongst those inviting him to take his opinions with him out the door. As a music non-professional, it would be difficult for me to assess the merits of Young’s argument; which is why I can appreciate the technical elements of Jim Dalrymple’s rebuttal, which strike me as persuasive. When using a high end sound system, I, for one, cannot hear any… Read more »

He’s a **** but I think he has a point. It doesn’t take that much to just flip a switch and have all music in 24/192 and have better quality components. That the Mac Pro comes with no good audio connectors, just basically a headphone out, ISSSSSS a giant joke. Yes you can add in a slot that will give you amazing abilities, but the old machines had better facilities and there is reason to lower the lowest common denominator more. In the end, he’s asking to raise the lowest common denominator. During a time when it would be really… Read more »

It’s worth pointing you (and anyone else) to 00:52:22 of today’s Mac Geek Gab episode 800 where we talked more about this “lowest common denominator.” https://www.macobserver.com/podcasts/macgeekgab-800/ Yes, 320kbps MP3 or 256kbps AAC does have less data than an uncompressed 16/44 (or 24/192) file, but… hearing the difference between those is not something most people can hear. Even the (very) trained ear can’t hear the difference universally: only on certain segments of certain tracks. And as for recording, I think having a single audio input is all one should expect on a computer. If you want/need more, then spend the money… Read more »

I appreciate the discourse! 🙂

I guess I’m still curious: You complain that the “audio capture components” are weak, but haven’t offered an alternative. What would that alternative be?

Both the capture components and the file formats. I would include DACs built in that support 24/192, and at least line in on the pro laptops, and both line in and optical on the desktop pro machines. And, I’d offer a lossless (compressed) 24/192 apple format even in the iTunes Store, and system wide.

The built-in stuff in Macs can record (and playback) at 24/96 (at least), which is certainly a “pro” level for recording, and well-beyond anything anyone needs for playback (very few places record at 192kHz, for a variety of reasons). It’s worth reading my 5yo piece on this: https://www.macobserver.com/tmo/article/digital-music-16-bit-44-khz-explained . As for the inputs — you still didn’t answer my question. 🙂 You just pointed at something we used to have and said we could/should have that. Problem is, at any level we could point at it and say, “not enough,” referring to the number of inputs, the type of jacks… Read more »

That you don’t want to accept my answers as answers is your prerogative. 192khz aint needed says you. But I say it is. And so do many pros. And it’s beyond trivial for apple to add. And believe it or not I CAN hear a difference on output on my Kefs when I have it on with great audio. And don’t move the goal posts. I said what I want, and MANY other audio pro’s have lamented the loss of the line-in and optical connectors. Again, this is trivial and it’s not a floppy drive. This is common stuff used… Read more »

That’s just it, John: Respectfully, I don’t think you quite understand how this works. The right dongle will have both the inputs you want and the 24/196 you want. It’s not limited to whatever Apple chose to put into the onboard DAC on any given Mac. But given what could be plugged into a Mac, I’m pretty sure there’s no good reason to set it at 192 on that input. As for your ability to hear the difference between 96kHz and 192kHz audio, I would encourage you to truly ABX test this. If you can hear the difference, you’ll (almost… Read more »

For example: this sub-$200 interface will (likely?) give you what you’re looking for here. https://www.musiciansfriend.com/pro-audio/focusrite-scarlett-2i2-usb-audio-interface-gen-3/l56575000000000

Disagree, why a dongle on a 15k machine. And I absolutely can hear the difference. Want to know why? Not because I have such exceptional hearing. Because when you pump out lesser audio to the Kefs that has it’s own amp and prefers 24/192, and you pump in lesser 44/16 or 48/16 (the macOS standard) the cross coding is crap. And why is that. Because the lowest common denominator is crap. You have loss on loss. And the reality is there is no need for this loss because all pros dump at 24/192. So why not just raise the bar.… Read more »