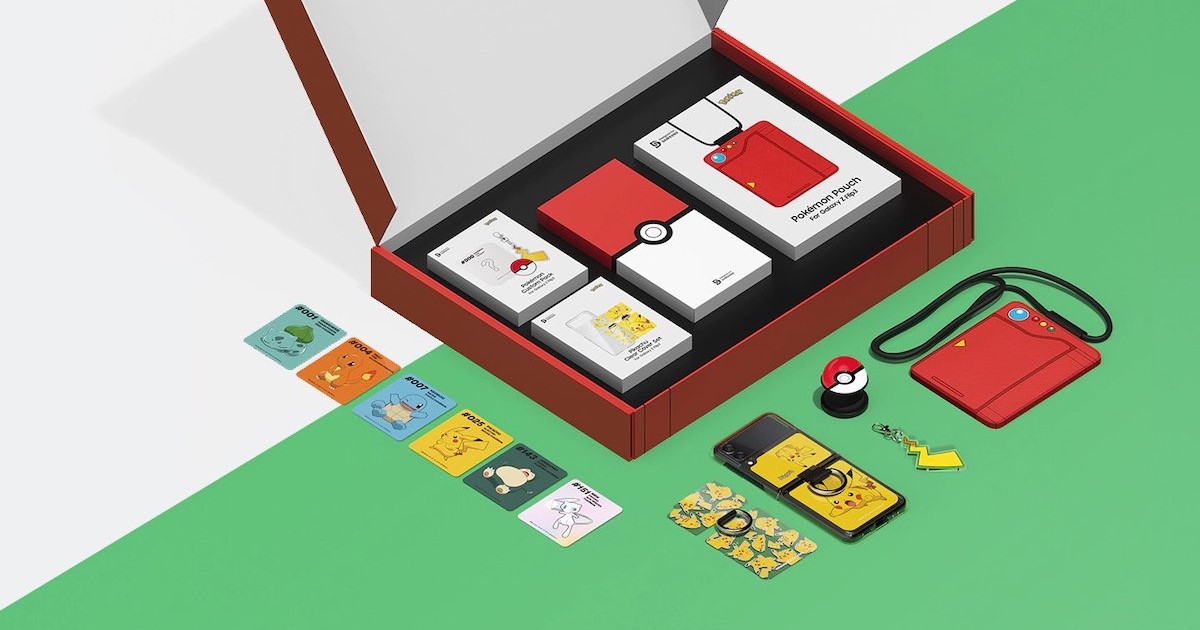 Get ready, Trainers! Today Samsung has introduced the Pokémon Edition of the Galaxy Z Flip 3. Exclusive to South Korea, the rebranded phone will come with a host of Pocket Monster related goodies.

While this sounds potentially great for Samsung fans, one question remains: when is Apple going to join the party?

Pokémon iPhone, I Choose You!

The Pokémon Edition of the Galaxy Z Flip 3 will ship with swappable cards for the case, allowing you to choose from several Pokémon to adorn the back of your phone. Other accessories include a PopSocket-style Pokéball stand, a Pikachu-tail keychain, and a Pokédex-themed necklace pouch. Additionally, the Galaxy Flip 3 will also be pre-loaded with Pokémon themed ringtones and wallpapers.

Samsung is looking to unveil more details about the phone on April 25. At this time, no price has been announced.

While this spells good news for Pokémon fans in South Korea, the rest of the world will have to wait. But what about iPhone users?

Currently, the only product Apple has ever allowed to be endorsed on an iPhone would be the (PRODUCT)RED line. Through this branding, Apple has been helping fight AIDS for over 15 years.

While it is no doubt admirable that Apple chooses to only brand the iPhone for good, perhaps it is time the company considers rubbing shoulders with some intellectual properties. A Pokémon-themed iPhone releasing in the United States would find Apple Stores mobbed with a flurry of Pokémaniacs lining up to throw cash at the company.

Similarly, it does’t even have to be Pokémon related. With Disney announcing Disney’s Mirrorverse arriving to iOS, this is a huge IP that could also benefit from having its own device. An iPhone with the iconic Mickey Mouse silhouette stamped on the back would draw huge numbers for both Apple and Disney.

Of course, there are some things to consider. Apple has done a great job of maintaining the integrity of the iPhone brand. While us tech nerds may squabble over particulars, the iPhone brand is still largely iconic in the public eye. Through Apple’s eyes, it may be that having a Pokémon or Disney-branded device cheapens the iPhone brand overall.

A potential solution to this would be using lower-end iPhone models to provide the additional branding. The new iPhone SE certainly could use some help in sales. A Disney-themed iPhone SE may just be the ticket to boosting numbers. Advertising the device towards a younger audience may also be a way to produce a themed-phone without “cheapening” the iPhone brand.

Having an iPhone themed around another intellectual property could also produce larger benefits. Tying the iPhone into a promotion could also result in donating money to specific charities. For example, Apple could partner with Nintendo to produce a Pokémon themed phone, while having a portion of the proceeds go to an animal sanctuary.

It’s All About the Fans

Conversely, something Apple may have already considered may be the obsessiveness surrounding specific brands in America. Branding an iPhone with a Pokémon theme may cause a huge amount of fighting at local retailers. Especially if the phone had a limited production. Coupling this with toxic-resellers could be a PR disaster.

If Apple were to associate an intellectual property with its flagship phone, it would have to be done right. Samsung’s Pokemon-themed phone is most likely hitting all of the bells for fans, and this is something Apple should take into consideration.

As a massive Pokéfan (expect a review revolving around Pokémon Go next week), a Pokémon-themed iPhone sounds like a surefire win. Imagining an iPhone with special packaging and accessories is something to drool over.

While it may be awhile before we see Tim Cook giving a speech in a Pikachu onesie, hopefully Samsung is not the only company to join the Pokémaniacs.