Samsung’s Galaxy Note 7 woes are exploding* with the force of an out of control chain reaction. In the space of a few short weeks, we’ve gone from Note 7s exploding, to some airlines banning any Samsung smartphones being turned on, to replacement Note 7 models exploding.

Over the weekend, Samsung accidentally tweeted a callous message to a Note 7 victim, a message that reveals just how jaded and cynical the IP-stealing, politican-bribing company can be. That was followed by reports Samsung was finally suspending sales of the Note 7.

Last week, Michael Klering of Nicholasville, Kentucky told his local CBS affiliate [Via Gizmodo) that his replacement Galaxy Note 7 caught fire. According to Mr. Klering, it wasn’t plugged in, but caught fire in the middle of the night. 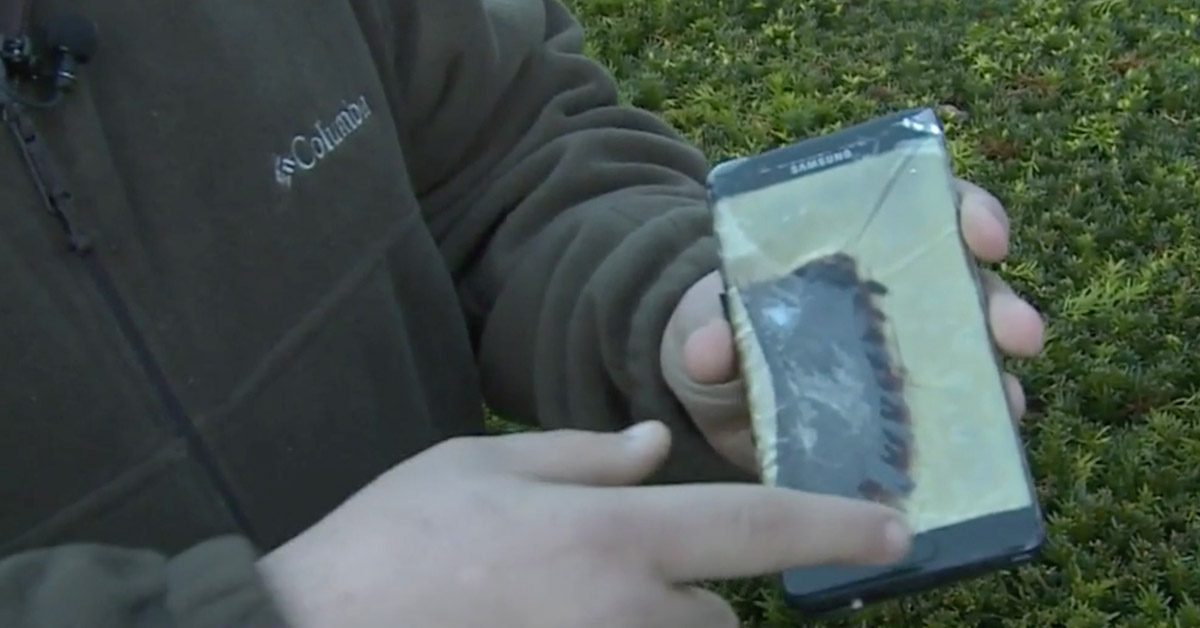 “The whole room just covered in smoke, smells awful. I look over and my phone is on fire,” Mr. Klering said. “It wasn’t plugged in. It wasn’t anything—it was just sitting there.”

When he wasn’t feeling well later that day, he went to the hospital. He said, “I was vomiting black so it was very scary. It was a lot of black stuff, and it didn’t look right.”

Which is horrific as all get-out.

Samsung Amps Up The Creep Factor

And then he got this text message from a Samsung representative:

Just now got this. I can try and slow him down if we think it will matter, or we just let him do what he keeps threatening to do and see if he does it.

Yeah, solid move, Samsung. I’m guessing you’re going to regret that. Not because it was the wrong way to think about this problem, but because it’s going to cost you sales. With any luck, it will dethrone you as the largest Android OEM.

Samsung has reportedly suspended sales of the craptacular Note 7, something that should have happened several days ago. It should recall all of them and offer everyone their money back.

I admit to enjoying far too much schadenfreude over this. This entire problem came about because Note 7 was rushed to market because Samsung delusionally tried to steal a march on Apple. Not only was the effort a catastrophic failure, the entire premise was rooted in Samsung’s delusions of relevance. I’m frankly delighted to see the company paying the price for its practices for one.

And my heart goes out to people victimized by this dangerous product.

LMAO, CB. Ahhh, the age old criticism that we can’t despise the Samdung phone division for its pathetic and illegal business practices since the iPhone uses Samdung chips. Does this make any sense whatsoever? I don’t think so. But nice try!! The Samdung phone meltdown (pun intended) is freaking hilarious and we are all enjoying it so much (except for the fact that people are getting hurt from it) that there is absolutely NOTHING CB can say that will detract from my giddiness of the situation. BBBWWWWHAAAHAAAHAAAHAAAAAAAA. As for Apple fires, they must have been very limited in scope as… Read more »

And in other news, it was announced today that Amazon has filed suit against Samsung, alleging trademark infringement on their Amazon Fire brand.

Ahhh, so fun to see the clones and drones jump all over Samsung – pretty ironic since 75% of the processors in iPhones are Samsung – so I expect all of the hypocrites here to NOT buy Samsung’s neé Apple’s iPhones? Rrright. How quickly the clones forget Apple’s laptop fires in 2008 and then stupidly enough again in 2013 seriously burning people. Hilarious.

And in yet more Samdung news, Samdung releases a new cylindrical computer that looks surprisingly familiar…

And in other news, it was announced today that Amazon has filed suit against Samsung, alleging trademark infringement on their Amazon Fire brand.

LOL, skipaq. Then I am truly sorry for disturbing your mental health!! I should have come up with a better comparison point!!

No problem RonMacGuy. I don’t have a horse in this election race and what is left has turned me off from watching. I find my mental health is better that way.

skipaq, my apologies, but I simply was using the political reference as a comparison point for the average state of intelligence in the US today. My comment was NOT in support of Clinton (please re-read) – it was simply comparing those who feel that Trump won the debate with his whining and mud-slinging to those who will still buy Samdung products and feel the company is ‘all right’. I support NEITHER Trump NOR Clinton, and bow my head in shame as an American that we will have one or the other as a president.

While back needed a new TV. Compared Sony, Samsung, LG, couple of others. Liked Sony the best, but Samsung was on sale, so it was cheaper and hey – they threw in a Samsung blu ray player! Six months after purchase, bought a Sony blu ray player as the Samsung never worked correctly, and yes I DID update the firmware. Problem was Sammy’s firmware was crap. Like their player. Never had another issue with the Sony. Now the TV is having issues. Only two years old. About a year ago my brother who uses only Samsung phones ask about the… Read more »

Couldn’t agree more that this is major blow to the Samsung brand. This is far worse than losing patent lawsuits since their is no court higher than public opinion. They have foolishly hit the self destruct button.

RonMacGuy, I don’t know how politics can be injected into this thread. I did not watch the debate and wouldn’t know who won. I would think the fact that Clinton is having such a hard time putting away this “moron” Trump speaks volumes about how Americans view her.

We need a new Microwave. One of those over the stove Microwave/Vent systems. A couple of weeks ago Home Depot had a perfect one for sale. The colour was right. The price was excellent. They had them in stock. All I had to do was pick it up, take it home, and bolt it in place. No. They were Samsung. We do not buy Samsung. Can’t avoid getting Samsung components in things, they’re everywhere. But we WILL NOT buy Samsung products. Period. No exceptions. Samsung is on the short list, along with Rogers Communications, of companies that we do not… Read more »

Yep. I have friends whose daughter works for Samsung in South Korea and went into it blind. Now they are getting burned (no pun intended), their job in jeopardy, and they can’t parse out the ‘why’. The collective unconsciousness in the world is at a staggering high. Personally, I think the misuse of tech is in very large part to blame. we don’t teach tech literacy (MUCH more important than engineering) in a world that now requires said literacy. Anyway, yes, Samsung are pretty much pond scum.

Bryan, well written, and as you can guess, I agree wholeheartedly. Likewise, my heart also goes out to all of the victims who have been injured by Samdung phones. At a more macro level, several things come to mind: (A) Lithium Ion batteries pack a lot of power into a very small package and can be much more dangerous than people realize; (B) Companies should not rush products to market that are powered by said batteries; (C) Rushing R&D (i.e. opposite of Apple) can have devastating effects, (D) The striving for simply making profit instead of making excellent products will… Read more »