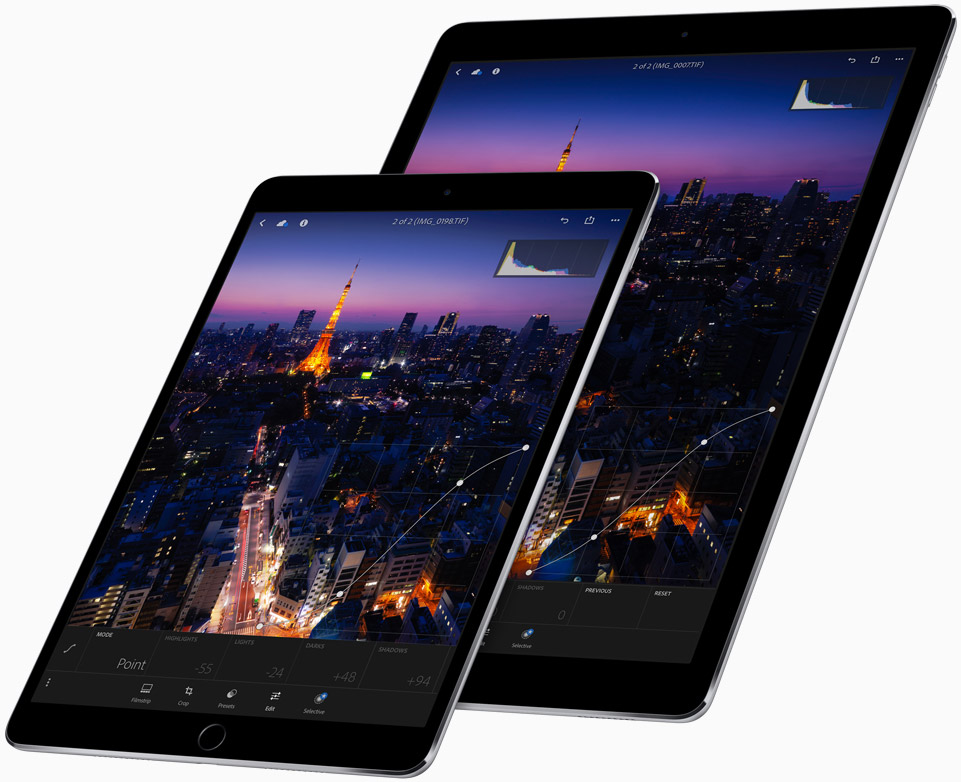 iPad Pro Family is awesome. But not replacing Macs.

There’s an emerging problem with the iPad that’s hard to assess. Every quarter, there’s a bit of good iPad news, and during every Apple Earnings Report, Tim Cook points to it.

So this year’s small year over year gain doesn’t mean much.

The following chart shows iPad sales since the beginning, 2010. After a slight general decline starting in 2014, unit sales seem to have stabilized somewhat. 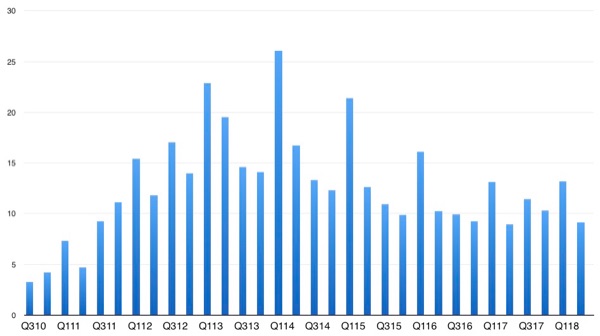 iPad sales for each quarter since launch in millions.

That’s good in one sense, but raises the question. Why aren’t the sales numbers returning to growth? Apple has, since 2015:

These initiatives have served only to stem the decline.

One factor that’s been discussed is that as iPhone screen sizes grow, customers find iPads less and less compelling financially. That’s probably why the iPad mini is a dying product. Another factor may be that iPads last a long time. The need to replace an iPad isn’t as urgent as a new iPhone, especially one like the iPhone X. There’s no “boastful-look-at-me-factor” with an iPad.

Another positive aspect is that, because iPads are so durable, the installed base of iPads is likely growing. My (Numbers) spreadsheet says that Apple has sold 404 million iPads to date. I’d bet that over 300 million are still in use. Like the Mac, as the population grows, the product obtains a more compelling market status.

And yet. And yet. I am always troubled by the unspectacular growth from year to year, in the long run. In 2016, Tim Cook said,

The iPad is the clearest expression of our vision of the future of personal computing.

In fact, it turns out that the iPhone may hold that distinction, given its contribution to Apple’s overall revenue. That was US$38 billion in 2018 Q2 compared to 4.1 billion for the iPad. That’s a factor of over 9.

I suppose it’s both pleasing to Apple that the installed base is probably increasing and the long-term decline in unit sales has been halted. On the other hand, Apple makes significantly more money from far fewer Macs sold. Anyone who thought the iPad would eventually replace the Mac thinks so no more.

One might surmise that some kind of fundamental change is coming. Disruptive change will include: Bigger and bigger iPhone displays. The demise of the iPad mini. The ability, in 2019, to run iOS apps on a Mac, most notably MacBooks. The handwriting is on the wall. The iPad isn’t going to obliterate the Mac (or PCs), and it may end up being a niche, special purpose product that lingers on, waiting for something to radically change its status quo.

And that’s just fine, for now, in the sense that the basic triad of iPhone, iPad and Mac are in a prospering ecosystem of interoperable tools and generating handsome revenues. But change is coming.

Having been in the market for a few years now and going through several iterations, I think what the iPad clearly demonstrates is that for large-screen computing tasks, the keyboard remains an indispensable interface for most people. A large-screen computer just isn’t as useful or practical without it. Let’s face it, in any society that is advanced enough as to generate the volume of cognitive and semantic information that we do, text (i.e. written language) is still the most efficient method of storing, transferring, and retrieving this information. And for languages that use alphabets or syllabaries (I can’t speak for… Read more »

John: I think another reason for the current growth trend is that many, if not most, iPad owners use their iPads primarily for consumption rather than as productivity tools. With that use case, people like my wife see no compelling reason to upgrade to a ‘more capable’ device when her current iPad retina plays video and other content just fine, most of which she listens to with headphones anyway, so quad speakers are a non-issue. My iPad Pro 10.5” is now a primary productivity tool, especially when travelling, but also around the office when I attend meetings. Particularly since the… Read more »

I’ve got an iPad 1, and use it daily for various tasks, mostly reading books. Looks like time to finally replace it with a new one, but selection is both slightly tricky, and a low priority for now. Learning the basics of Swift would probably be near the top of the list of things that would be nice to do. Work-ish stuff, meanwhile gets done with one or more of the following: 2009 iMac, a couple different 2013 MBPs (13″ and 15″), and an iPhone SE. Replacing/upgrading any of them is, again, a low-priority item; they just keep on doing… Read more »

I haven’t had an iPhone for three years now, just an iPad. I’m hoping that Apple will eventually link the watch to the iPad. It seems silly to me to use such a small screen for productive work.

I have the following Apple products: 2 Macs (iMac and MacBook Pro) 1 iPhone 1 iPad 1 AirPods 0 Apple Watch I haven’t worn a watch since the last millennium and nothing about the Apple Watch – yet – has changed that. Of the Apple devices I have if I was forced to give up one the choice would be a no-brainer … the iPad. I guess my iPhone is most important to me, followed very closely by my MBP. I absolutely love my AirPods, but I could go back to wired headphones if I had to. And my iPad… Read more »

I see iPhone and iPad (and Apple Watch, on the micro side) as the same product line. As universal sim becomes more prevalent, and 5G becomes the data standard, the communication differences (already minor) will disappear, although different sizes will undoubtedly still have different capabilities. I really like my Apple Watch (3, w SIM) although sadly I cannot use the cellular capability in Italy (a country where 12GB per month costs $12/m).

I have to confess – I’m a small screen man. I love the iPhone SE. I have an iPad mini and an 11-inch MacBook Air. Their portability is tremendous. (On my office desk is an iMac, – the house media server is a G5!) I use the MB Air and the iPhone most. The iPad mini is so convenient and iOS apps do so many things that Mac OS apps just don’t do. Add in the seamless iCloud integration that couple all the devices (most of the time) and there’s a tool for every occasion. No-one has yet invented the… Read more »

I have to admit I feel the way you do an have always wanted even smaller screens than the SE, however my eyeballs rapidly have moved me in a different direction in the last few years.

Even with my failing close vision, I am still tempted to get my dick tracy watch instead of a phone next time.

We have 3 iPads now in our house.
I like the bigger screen compared to the 5 phones we have.
Phones are great, but much of what we do with iPads really makes a larger screen shine.

The iPad Pros are great for the kids to do their art with.
Minecraft Better Together edition is great on the bigger screens.
Games in general.
Books
Videos.

iPads are better for content consumption and the iPad pros are much much better for artistic creation.

The iPad Pro (and I guess the new iPad too now) is great for handwritten notes. What percentage of people do that these days? I like using my own shorthand and drawing things in the margin or arranging the words in groupings relative to each other. I can’t do that as easily when typing, though I do have a decent system of bulleted lists. I also like the iPad for drawing, though I’m not much of an artist. When I look at scifi shows like StarTrek I see multiple iPad-like screen devices laying around. Right now they are too expensive… Read more »

1) Thank you, John, for using “installed base” rather than the awful phrase “install base” which seems to have infested the web. 2) I am a huge fan of the iPad, but I agree that it faces stiff competition on multiple fronts: capable and powerful large-screen iPhones that run many of the same apps; cheap Android tablets for games and streaming; cheap touchscreen Windows-based laptops for general computing; high-quality Apple laptops (though none with touchscreens) for general computing; Chromebooks in education; and (as you note) a large installed base of devices that still work. I’m still not sure how Apple… Read more »