So there I was. I had my printed email for an iPhone 7 that I pre-ordered on September 9th. It said to be at the Park Meadows Mall Apple store between 0900 and 0930 on September 16th. 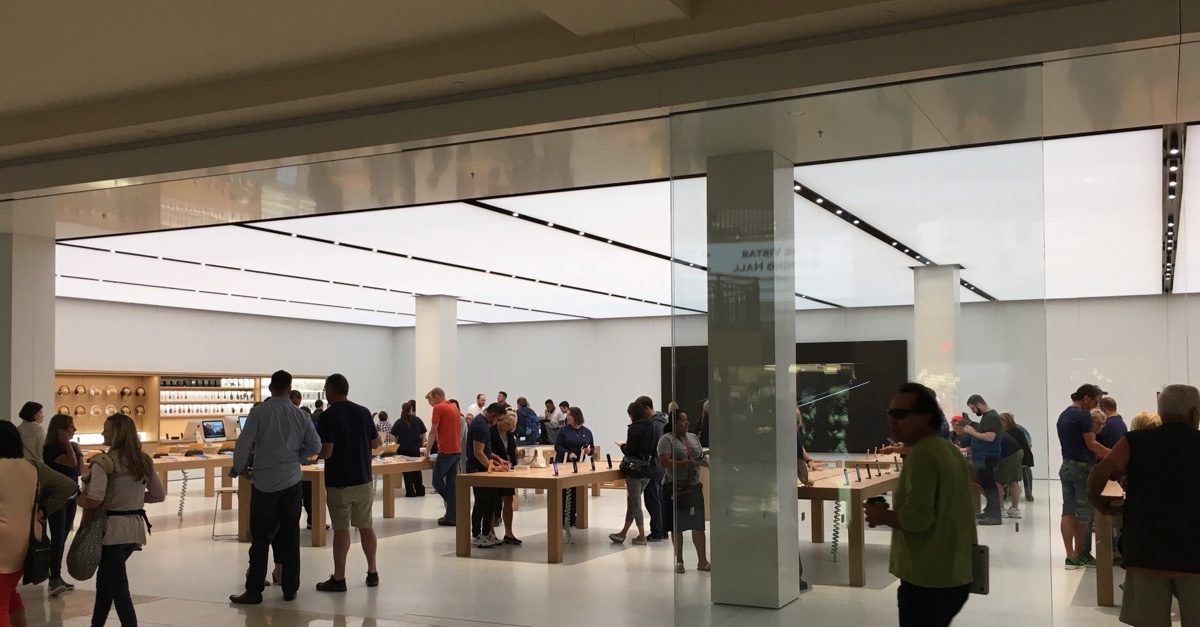 What I expected, based on last year’s experience, was to be invited into the store on arrival and shortly assigned a sales person who would conduct the transactions: trading in an old iPhone 6s for store credit and doing all those administrative things for the new iPhone 7. That includes a final test of calling my wife’s iPhone to make sure the AT&T deactivation of the 6s and activation all went smoothly on the new iPhone.

Last year, as I recall, I had to wait briefly in a short line outside the store at my scheduled arrival time. After I met my sales agent, it took about 30 minutes and I was out the door.

I arrived at 0901 and quickly found the Apple concierge standing in the concourse. I showed him my printed email, but instead of directing me to a line in front of the store, I had to wait in a side concourse, about 75 meters from the (new) store, just opened, further down the concourse. There were two lines.

My line had seven people in front of me, the pre-order line. Next to us, separated by banker’s ropes were the walk-ins. All of us in the pre-order line, which grew to about 10, waited about 40 minutes before anything happened. I asked about that.

It turns out, according to a manager, that customers who were in the iPhone Upgrade Program were invited in early, and those transactions were taking a lot longer than expected. It produced a slow-down.

But once a group of five in front of me had been moved to the front of the store, it was time for three more of us to move to that second line right in front of (the glorious, new) store. A second line! There, we waited another 15 minutes or so. About 10:05 am, I was greeted by my sales agent and escorted into the store. I have to say, this woman was amazing, well trained, courteous and efficient. It was a joy to work with her. 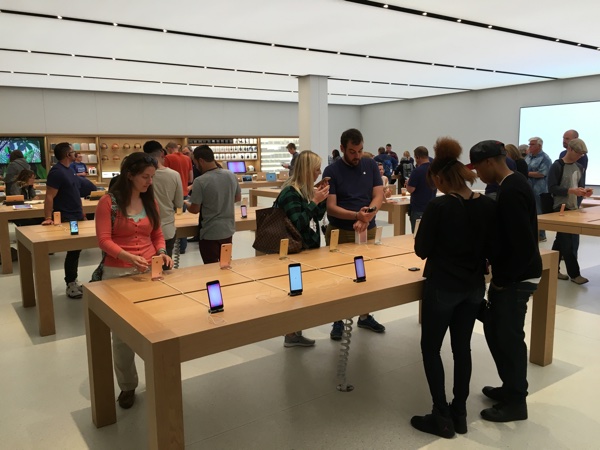 We worked at a table like this. The new store is one of 36 with this new design.

Once we started working with each other, things went smoothly. But there was an awful lot of administrative detail and multiple presentations of my driver’s license.

Everything went smoothly, but as you can see there are a lot of steps. ( I don’t think I even listed them all from memory.) My salesperson, however, was remarkably efficient and experienced with her handset. There was no pain here, just steady progression in a fixed sequence.

I was out of the Apple store at about 10:45. In chatting with one of the store managers on the concourse, I could see that they were all doing everything possible to get us moved through, but the process was initially a bit delayed. I was somewhat annoyed that this process took a total of 1h:45m, but at least it was a fun, pleasant and well-managed transaction. I had a chance to chat with lots of customers.

Notes on the Line

When I arrived at 0901, there were eight of us in the pre-order line and about 50 in the walk-in line. I’ve seen much longer lines for iPhone launches.

When I left at 10:45, things had reversed. The line for those who had pre-ordered was about 50, thanks to the earlier delays, but the walk-in line was only about a dozen. I concluded that people learned quickly that they wouldn’t be able buy the iPhone they wanted and went home or back to work.

Another thing I learned from a manager is that early arriving walk-ins were given a selection sheet. They could reserve an iPhone right there and then from available stock. If they stayed there and didn’t leave the line, that selected iPhone would be guaranteed. I think some people didn’t see what they wanted on that “pick from today’s inventory” list and left.

In my discussions with people in line, the two blacks were the most popular color.

On my way out, I asked some of the people in the walk-in line why they didn’t pre-order. I was expecting most to say that they weren’t aware of that option. I was wrong. Everyone I talked to knew about the pre-order opportunity on the 9th. The reasons I got were 1) I wanted to come to the store myself 2) I was out of the country last week, 3) I had to work, 4) I had something to do that morning and didn’t want to be up late and 5) I had some finances to work out and had to be here in person.

The process of certifying that you’re the legitimate owner of the trade-in, all the “paperwork” and the activation of a new phone by the identified purchase/Apple ID takes a lot of time. I know Apple thinks about this, and I’d be pleased if the process could be sped up.

Alert readers will note that I forgot to include AppleCare Plus in my initial pre-order, but that didn’t take long to complete in the store. 30 seconds. Laser scan the barcode on the box. Done.

I think that the biggest annoyance was that I was given a time window to arrive and expected to be ushered into the store in that window. Logistics and unexpected delays in the Upgrade Program foiled that plan, delaying me by about an hour. My wife was with me, for fun, but she was visibly annoyed by the delay. She wandered off to have coffee and shop.

Next page: The Tech News Debris for the Week of September 12th. The computational dominance of mobility.

Michael33rs: Mine is the standard black. I think it’s very good looking.

I pre-ordered a iPhone7 to pick up at the Michigan Avenue store here in Chicago, and had a “check-in” window of 10:30am-11:00am. I arrived to find parallel lines snaking around the corner and halfway down the block. I thought these were for walk-ins. No!! They were already running 30 minutes late for pre-orders and “guessed” that we would have to wait 45 minutes outside standing on the concrete sidewalk. What a fiasco. Fortunately it was a pleasant day and we were in the shade. I finally made it inside and upstairs to the genius bar where they were doing the… Read more »

“With all the hype and all the excitement of wireless AirPods, I have heard no one comment on the lack of the carrying case for the wired EarPods included in the box.”

Reportedly, I am the only one who used them. 😀

With all the hype and all the excitement of wireless AirPods, I have heard no one comment on the lack of the carrying case for the wired EarPods included in the box. So – what gives! An $800 iPhone and Apple can’t splurge for a twelve cent piece of plastic? Best part – and old case won’t work because the Lightening connector is too fat. Any thoughts?

For the first time I was number one at our Verizon Store. Don’t live close to an Apple Store. Felt good about my chances…. arriving at 4:00AM! At 7:50 they came out and handed out numbers. The kid says you should be able to get your pick of our inventory. Five minutes later another guy came out and asks if anyone is looking for a Plus. half of us raised our hands. Sorry…. Apple didn’t ship us any! We called around and none of our stores got any. Shot over to Best Buy and got the same story. I don’t… Read more »

In regards to step #11 in your article, which color did you buy, John? I have an iPhone 6 Plus that I decided to (happily) live with for another year, although I do admit to putting one of those glorious looking Jet Black beauties in my Apple shopping cart on more than one occasion😍!

Another fascinating quote from the Verge article:

“Apple by itself shipped more iPhones (74.8 million) in the last quarter of last year than the entire PC industry (71.9 million) managed to ship PCs.”

IOW, Apple is now selling more A-series ARM processors in its phones than Intel is selling x86 processors in PCs. Let that factoid sink in for a moment…

But all is not doom and gloom at Intel, as they apparently scored 4 (!) components in the new iPhone 7:

archimedes: There’s a lot of ownership authentication and fraud prevention in that process, but as I said, I’m hoping, someday, they only make me enter my Apple ID and Driver license # ONCE!

Typo alert! ‘driver’s license’ should be ‘driver license’. Don’t believe me? Pull it out of your wallet and look. This is where you say, “I’ll be darned!

Same bad experience at the Apple store. I don’t understand why they don’t just have you check in when you arrive; then, if there is a delay, they can call you or text you when your phone is actually ready. Instead they make you stand in line for more than an hour – why? Is it really necessary to have visible lines outside the store to show that the iPhone is “popular” or something? I’d prefer a more customer-friendly approach. They could also notify you in advance if there is some unanticipated delay, much as some airlines do. That way… Read more »