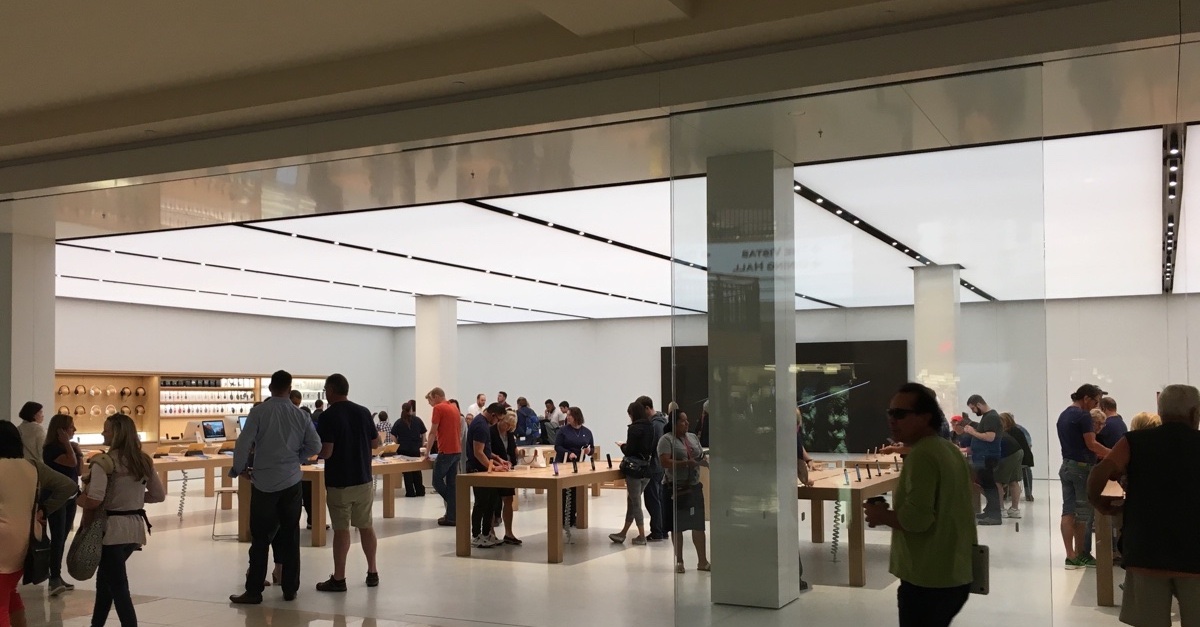 We know the iPhone is 64-bit and fast. But the dominance of certain technologies has put a premium on computational performance in a mobile environment. That includes encryption, Apple Pay, camera image processing, facial recognition, motion tracking, fingerprint recognition and all kinds of things that a desktop computer, or even notebook, typically isn’t tasked to do.

This very thorough article at The Verge explains how the requirements of extreme smartphone mobility are threatening Intel. See: “The iPhone’s new chip should worry Intel.” One section points out, with respect to the Geekbench score of the A10 Fusion:

The A10 chip inside the iPhone 7 comfortably outpaces its predecessors and Android rivals, and even outdoes a wide catalog of relatively recent Mac computers (including the not-so-recent Mac Pro). The iPhone’s notoriously hard to benchmark against anything else and this is just one metric, but it’s illustrative of Apple’s accelerating momentum and mobile focus.

And that brings up a natural question. Is there a class of desktop activities that would benefit from these tremendous advances in computational power? Or is the usage profile of the desktop/notebook doomed to always be a second class computational citizen compared to mobility, falling further and behind? It’s something to think about.

One class of desktop activities that comes to mind is extreme computation for science and engineering. An astrophysicist friend of mine ponders the idea of 128 or 256 A10 processors set up in a massively parallel computational engine on the desktop.  Such a super Mac would be, perhaps, a cubic foot in volume and provide supercomputer power far beyond what we’re accustomed to on the desktop. The performance might be a good fraction of a petaflop.  Of course, there are many technical and marketing details to attend to, but it remains an exciting thought.

We are interested in Tesla because we think that Apple might be building an electric car. Tesla’s affordable Model 3 won’t be available until late 2017 at the earliest, but later this year you’ll be able to buy a Chevy Bolt with the same range, about 240 miles. Road Show at CNET liked this new Bolt a lot. “Testing the Chevy Bolt’s real range in the real world by driving it like a real car.” I’ve always kept my eye on this car, written about it, and I think it’s going to be a winner.

Along those lines, The Verge took a ride in Ford’s autonomous car.

Unlike the rite of passage of becoming a student driver, taking a ride in an autonomous car means mean putting your life in the hands of the machine. But in actuality, riding in Ford’s well-behaved self-driving car was an unremarkable experience. Ford has programmed its cars to drive in a manner one might expect from a nervous student driver.

Things are moving fast. All the car makers are in top gear with their technology. Apple must feel like it’s racing to keep up and confronted with a myriad of major engineering tasks. I surmise that Apple’s inexperience in the automotive market is now coming home to roost.

It looks like Sony has stumbled with its 4K/UHD Blu-ray player. This not the player we were looking for, according to CNET

I’ll be researching these players in the coming months, especially with regard to HDR and studio support for HDR and Dolby Vision on 4K/UHD Blu-ray players. As will everyone else as we approach the December holidays. Why?  4K compression during streaming won’t provide the full exploitation of the 4K/HDR experience that a physical disc can.

Apple tends to keep its product lines relatively simple compared to other companies. A confusing line of products makes it hard to choose, and a wrong, confused choice can lead to buyer’s remorse. But maybe that doesn”t apply with carrier wireless plans. See: “Mobile phone plans: When marketing goes too far.” Alert. Your head will hurt after reading this.

Finally, here’s a fascinating story and theory about why Apple replaced the mechanical Home button on the iPhone 7. I had never heard of this phenomenon (and theory) and assumed that Apple just wanted to eliminate a mechanical failure mode. But this article digs into something completely different. And astounding. “iPhone 7 release: Home button may have been removed because people in Asia don’t press it…”

Michael33rs: Mine is the standard black. I think it’s very good looking.

I pre-ordered a iPhone7 to pick up at the Michigan Avenue store here in Chicago, and had a “check-in” window of 10:30am-11:00am. I arrived to find parallel lines snaking around the corner and halfway down the block. I thought these were for walk-ins. No!! They were already running 30 minutes late for pre-orders and “guessed” that we would have to wait 45 minutes outside standing on the concrete sidewalk. What a fiasco. Fortunately it was a pleasant day and we were in the shade. I finally made it inside and upstairs to the genius bar where they were doing the… Read more »

“With all the hype and all the excitement of wireless AirPods, I have heard no one comment on the lack of the carrying case for the wired EarPods included in the box.”

Reportedly, I am the only one who used them. 😀

With all the hype and all the excitement of wireless AirPods, I have heard no one comment on the lack of the carrying case for the wired EarPods included in the box. So – what gives! An $800 iPhone and Apple can’t splurge for a twelve cent piece of plastic? Best part – and old case won’t work because the Lightening connector is too fat. Any thoughts?

For the first time I was number one at our Verizon Store. Don’t live close to an Apple Store. Felt good about my chances…. arriving at 4:00AM! At 7:50 they came out and handed out numbers. The kid says you should be able to get your pick of our inventory. Five minutes later another guy came out and asks if anyone is looking for a Plus. half of us raised our hands. Sorry…. Apple didn’t ship us any! We called around and none of our stores got any. Shot over to Best Buy and got the same story. I don’t… Read more »

In regards to step #11 in your article, which color did you buy, John? I have an iPhone 6 Plus that I decided to (happily) live with for another year, although I do admit to putting one of those glorious looking Jet Black beauties in my Apple shopping cart on more than one occasion😍!

Another fascinating quote from the Verge article:

“Apple by itself shipped more iPhones (74.8 million) in the last quarter of last year than the entire PC industry (71.9 million) managed to ship PCs.”

IOW, Apple is now selling more A-series ARM processors in its phones than Intel is selling x86 processors in PCs. Let that factoid sink in for a moment…

But all is not doom and gloom at Intel, as they apparently scored 4 (!) components in the new iPhone 7:

archimedes: There’s a lot of ownership authentication and fraud prevention in that process, but as I said, I’m hoping, someday, they only make me enter my Apple ID and Driver license # ONCE!

Typo alert! ‘driver’s license’ should be ‘driver license’. Don’t believe me? Pull it out of your wallet and look. This is where you say, “I’ll be darned!

Same bad experience at the Apple store. I don’t understand why they don’t just have you check in when you arrive; then, if there is a delay, they can call you or text you when your phone is actually ready. Instead they make you stand in line for more than an hour – why? Is it really necessary to have visible lines outside the store to show that the iPhone is “popular” or something? I’d prefer a more customer-friendly approach. They could also notify you in advance if there is some unanticipated delay, much as some airlines do. That way… Read more »