The technical challenges of a personal voice assistant in a car rise dramatically above the informal use in a home for music, weather and recipes. There may be multiple people in the car yelling, and the danger level far exceeds the kitchen, baking chocolate chip cookies from Alexa’s best recipe or asking Siri to play a song. 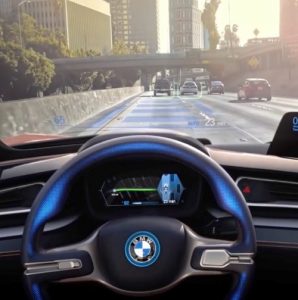 BMW, along with other car makers, is particularly aware of this. For a good survey of how BMW views the technical aspects of the human-car interaction, see this enlightening article at Tech Crunch. “BMW says in-car digital assistants have to go beyond being ‘Echo Dots in a cup holder’.”

And, yes, according to the article, that’s been done.

Speaking of personal voice assistants, I’ll pair the above with this long but delightful article by the esteemed Douglas Hofstadter. (That’s him, the Indiana University professor who wrote Gödel, Escher, Bach. ) Dr. Hofstadter delves into the nuances of machine translation of languages in “The Shallowness of Google Translate.”

These two articles raise an interesting point for me. Namely, our current technology is a lot better at manipulating text and producing speech than it is at putting real human-like understanding behind those processes. We know that all too well from Siri. The first part is a lot easier than the second part in this evolution. As a result, it sounds like we’re talking to an entity (or translating through one), but it’ll be a long time before we’re really happy with the sophistication and perceived success of the dialog. How will companies like BMW, in cars, and Apple, with Siri, deal with that?

There will be plenty of frustration as companies present voice assistants in the best light, but the consumer ends up endlessly disappointed. Case in point: Siri on HomePod. Apple designed for one kind of performance and reviewers expected something different or better. (For more on this, see page 2.) It was a natural human reaction.

Another classic case in point was when I saw Jeremy Clarkson on TV trying to give voice directions to a car’s navigation system. The car adamantly refused to understand and had no Plan B. That is to say, the car’s system had no way of knowing, with any kind of machine introspection or error recovery mechanism, that it was failing to understand the human. It just kept on flubbing, and Mr. Clarkson quickly gave up. How could the car company justify that level of interaction going into production?

We’re going to be in that phase for awhile, but my surmise from the article about BMW above is that the company recognizes the nature of that kind of problem in the driving environment. Perhaps it’ll be that level of challenge that lifts up all our (not so) smart speakers.

One way to solve this problem may well be developing expertise in machine learning, especially specialized chips that are powerful enough to work locally. They won’t have latency or connectedness issues. Here’s an example from another discipline, medicine. “Machine learning techniques show promise for supporting medical decisions.”

Where this machine learning goes will be interesting to watch. It may not end up being quite so human after all.

Next Page: The News Debris For The Week of February 26th. The secret success of the Apple Watch.

Hofstadter’s critique of AI driven translation is basically an elaboration of John Searle’s Chinese Room thought experiment which points out that computers are incapable of truly understanding anything, i.e. concepts, ideas, what ‘anger’ really means, what it means to ‘like’ something, etc. All they do is manipulate symbols based on a set of rules. Used to be, under GOFAI (good old fashioned AI) those rules were devised by these strange creatures called ‘programmers’, in the post GOFAI regime of Machine Learning we have a higher order of rule making where the rules are made by an even stranger creature called… Read more »

I have been forever annoyed while driving when a radio commercial comes on with siren noises or other noises that sound like possible car troubles. And then there’s the PSA against even reading texts while driving that starts off with and includes several sounds of a text received alert. It is only a matter of time when a radio commercial triggers a voice activated assistant to do something unwanted or even dangerous. Voice recognition would at least reduce such a possibility but I do wish that radio stations and advertisers would be more considerate.

“solution looking for problem” Exactly right, but you finally put into words what I had been thinking for quite a while.

AppleWatch: The idea of the AppleWatch really coming into its own sounds about right. I said when it was released that it would be about the fifth generation before I’d get one and as features get added it’s looking like that should be about right. For reference my first iPhone was a 5C, Home Automation: Whether Amazon/Alexa crushes Apple/Siri misses the point. I still have not seen a compelling case for it. Today a bunch of us were chatting at work. There were engineers, programmers, systems people, and such. All very tech savvy, all very geeky, and all dismissive of… Read more »

Whenever a company tries to sell you a smart device with the promise of ‘easy set up’ and ‘hassle free updates’, it is best to run for the hills.

For me, Siri won’t be a real AI assistant until I can say “Siri, take the Apple users agreement that came with my iFridge and sing it to the tune of Gilbert & Sullivans Modern Major General” and it does.

That sounds about right, a perfect AI test.