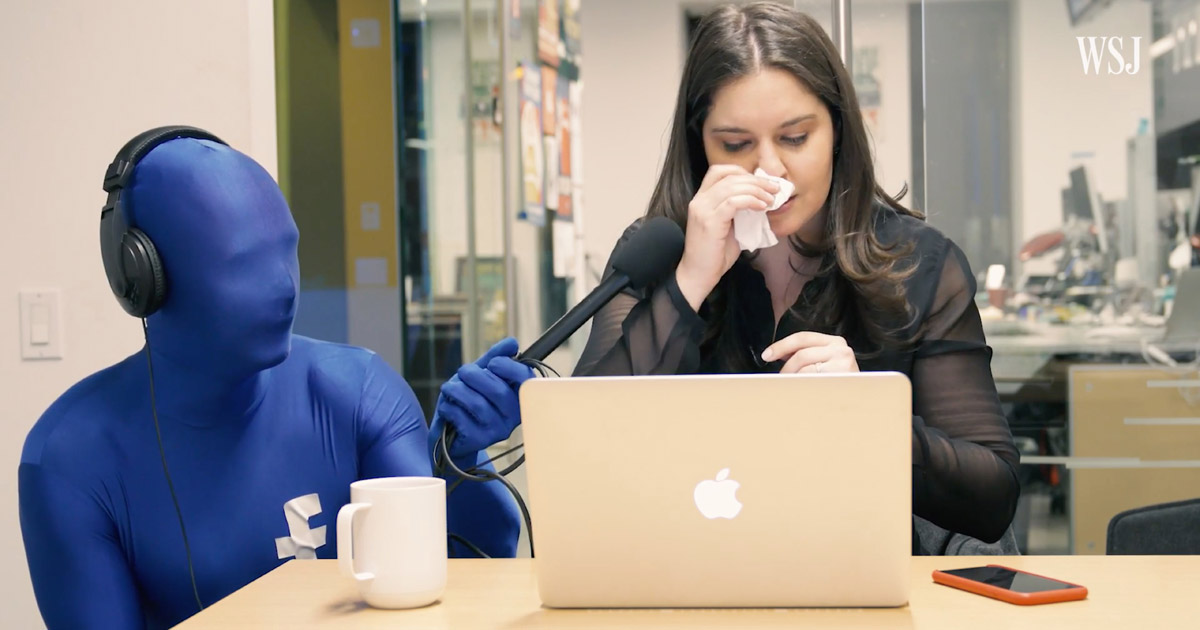 A lot of folks believe Facebook is listening to us through the microphones on our iPhones (and Android devices). It’s not true, but the anecdotal evidence suggesting otherwise can be convincing. Which set Wall Street Journal reporter Joanna Stern on a mission to find out if this was true.

Spoiler: it’s not. Apple would never allow that, and neither would Google, if for very different reasons. But more importantly, even if Apple was cool, bro, with such a thing, it would take more computing power and know-how than the NSA to listen in on us all the time and make sense of what was being said. That’s what Ms. Stern confirmed when talking to a variety of sources, and she ended up with this basic truth:

But she didn’t stop there, she dug in to find out how Facebook watches us so closely that it feels like they’re listening in. Firstly, I recommend her full article. Secondly, watch this great video she made for the piece:

Thirdly, while she goes into the steps you can take to limit Facebook’s privacy and tracking invasions, we’ve been showing you how to do that for years. Fourthly, she shows in clear detail how Facebook works with its own web trackers, Instagram, and other services, as well as third party advertising trackers. At the same time, those same third party services in turn work with Facebook.

The result of all that working together, along with massive data mining, psychological expertise, behavioral science, and more, all combine to allow Facebook to know us as if they’re listening in on our lives. One of her examples was how data from loyalty cards lets third parties match us to our Facebook profiles and vice versa.

And that’s just the beginning. The bottom line is that when it comes to Facebook, we are the product.

The only reason Facebook and Twitter are still in business is because they have been fulfilling this role for US propagandists (now legal, thanks to Obama) since their inception. Just as Hollywood did it’s “big thanks” to the US military for industry saving funding at the Oscars, social media owes its soul to the surveillance state. Social Media companies must be galled that they’re being threatened with regulation for not being even more IN than they already are. It’s a complete takeover, and social media companies will be doing all the work and taking all the blame. I’d call it… Read more »

Bryan: Just dropping by to catch up on all my TMO reading for the week, so pardon the late post. Great PSA, and kudos to Joanna Stern for investigating the facts and writing an evidence-based article about the craft FB and third party advertisers are actually using. The exercise illustrates how easily our minds are led to make cognitive leaps in the absence of evidence, something that psychologists and other scientists who study how our minds work have known and published for decades, and which not only advertisers, but the entertainment, law enforcement, military, and organised criminal communities, amongst many… Read more »

Last week on Facebook I mentioned in a post that my new shirt was the color mykonos blue. A few days I later I get a friend request from the Mykonos Resort. Coincidence? Maybe. Friend requests from strangers seem to come in spurts and on the same day I got one from a 20 something selfie, which is the usual demographic; truth be told she and Mykonos are probably data miners or worse.

Most important article. Deserves a permanent link on the TMO home page. I do wonder if it would change one person’s mind about using Facebook, though. Very handy ammunition for those of us trying, but… look what you get in return for giving up a little privacy! Never in the history of the world has there been a better example of ‘just don’t get it’. On both sides. 😀