Not an Apple Watch Series 3 Review: The Thrilling Conclusion 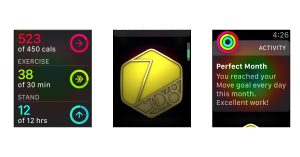 Last week I promised to tell you about the one feature that makes the Apple Watch indispensable to me.

I won’t keep you in suspense—the feature is Activity and its three colorful rings.

Before I explain how Activity works and why I think it’s so great, allow me to provide some context. I have struggled with weight since time immemorial. Since college I've fluctuated between 185 and 270 pounds — closer to 270 than 185 more often than not.

In January of this year, I weighed 230 pounds and finally decided it was time to do something about it once and for all.

I know several Apple Watch users who are noticeably more fit since they started using the Watch’s and it's Activity features, so my New Year’s resolution was to obey the Activity rings every day until I reach my target weight of 185 pounds.

I’m not there quite yet, but after seven months of slavish obedience to my rings, I’ve logged over 1.6 million steps over the course of nearly 800 miles. And, as a result, I've lost nearly 30 pounds since January (I weighed 198 this morning).

The Rings Lord Over Me

The concept of the Activity rings is simple. The three rings are Movement (red), Exercise (yellow-green), and Standing (blue). In the morning, the rings are mere dots at the 12 o’clock position. As you move, exercise, and stand, the rings grow into circles. When a ring completes its circle and touches itself at 12 o’clock on your watch face, you’ve closed the ring by meeting or exceeding that goal.

I use the Activity watch face (center in the image below), so I’m mindful of my rings all day and night.

Between the rings and the encouragement, I've remained motivated for seven months so far.[/caption]

That’s motivating by itself, but the Apple Watch encourages me every day. In the morning, I receive a progress update encouraging me with messages like“Perfect Week! Close all three rings for the next three days, and you ‘ll earn a Perfect Week award. You've got this."

When I don’t fill my rings as quickly, as usual, my watch alerts me that one or more rings are usually farther along by this time of day, gently encouraging me to find some time to get up and be active. Finally, when I sit at my desk for longer than 50 minutes straight without standing, the watch gently chides me to stand up for a minute or two.

I started the year with my Movement goal at 400 calories a day, then upped it to 450, and am about to increase it again to 500 (or maybe 600). The Exercise and Standing goals are preset to 30 minutes (minimum) per day for Exercise, and one-minute of standing for every hour you spend sitting.

And that, gentle reader, is why the Apple Watch has become absolutely indispensable to me, and why I'll probably never wear an analog watch again.

I know several Apple Watch users who are noticeably more fit since they started using the Watch’s and it’s Activity features, so my New Year’s resolution was to obey the Activity rings every day until I reach my target weight of 185 pounds.

I am one who gives credit for weight loss to my Apple Watch. Daily brisk walks to close the Move and Exercise rings. Also situps and such, some weight lifting, food portion control and eating healthy foods. It took me 12 and half months until I met my goal burning 2500 calories a day while taking in about 1800. I had to buy new clothes of course, went from extra large to small or medium (depends on how the item is cut), but I now dress up a lot. I feel very well, physically and emotionally.

Hmmm, I can't get b-quote or carriage return to work in my comment. I can live without the b-quote and use quotation marks, but I love my white space paragraph breaks.

Trying it again from my Mac, I was on my iPad for the first comment.

Okay, paragraph break works on my Mac, but not on my iPad.

I hear you, Lee. It's the first thing I've tried in a long time that lasted more than a month or two. After 8 months, I'm starting to feel that closing the rings is as much a part of my day as brushing my teeth or eating lunch.

I've tried other fitness trackers, but nothing ever came close to motivating me as much as my Apple Watch does.

Truly brilliant. And, I expect it to just get better and better in future iterations.

I thought that might be where you were headed with this. There are all sorts of reasons, in my opinion, to not simply like but love the AW (I know one Bryan Chaffin - you may of heard of him - who maintains that he likes but does not love his). Most often, when I speak to someone who owns one, but is not impressed with it, I discover that a majority have never explored or tapped its potential, have no idea of its capability and are astonished with even a brief walk through (I’m sure that doesn’t apply to Mr Chaffin).

Regarding the rings, I quite agree. Congratulations (and to Lee) on your weight/fitness achievements. Those are literally life prolonging and life quality enhancing accomplishments, and not to be underestimated. I think this will remain one of the AW’s lesser appreciated legacies that may never be quantified without deliberate study.

This is also a primary driver for my adoption, although not the only one. I’ve always engaged in strenuous workouts (usually pre-dawn) since I was 12, so this has always been a part of my adult life. What the AW does, however, is provide me with quantitative feedback on the quality of my workouts. For one thing, that’s incredibly motivating on those days when I feel like my workout totally sucked, and yet the indicators all show real effort. For another, it’s helped me figure out what works, and how to get even more out of certain routines, which increases the benefits of those workouts.

Finally, I also appreciate the stand reminders. Apple’s brilliance is that you only need to stand for 1 minute to win the hour, although I generally will do more. With my old Nike Fuel Band, I had to be up for 10min; not always practical when I’m at work or in a meeting. And, I’m sure for most people, it’s motivational feedback to be told multiple times per day, ’You did it!’. Maybe not if you’re OJ.

I hate to say it but Bryan is jaded. And I'm not certain he took the rings seriously. The rings are the main thing that made me love the watch… I've had the watch since version 1, but before I was like Bryan... I merely "liked" it. I only fell in love with it when I committed to obeying the rings.

I am a self-admitted Apple Watch fanboy today.

Very true, Bob. You and Terry W. Are the only people I know who’ve closed their rings monthly. I’m trying except I don’t do enough since being retired. My weight has finally started lowering. I’ll keep at it. I also you many many cardiology apps. They really help my doctors. But then I’m old! Haha.
Ps: miss you and everyone from our MacWorld days! Hope you’re doing well.
Bob Meyers, AUG 179....

I miss you and Macworld more!

As for my watch... I decided the rings would lord over me this year. And I obey (mostly) the rings and have made closing them daily a priority. That's all. 🙂

I am one who gives credit for weight loss to my Apple Watch. Daily brisk walks to close the Move and Exercise rings. Also situps and such, some weight lifting, food portion control and eating healthy foods.

I am one who gives credit for weight loss to my Apple Watch. Daily brisk walks to close the Move and Exercise rings. Also situps and such, some weight lifting, food portion control and eating healthy foods.