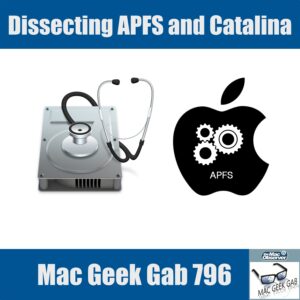 It is unacceptable that Apple does not release full APFS documentation, and particularly how to write to such disks (as they did about how to read them by September 2018), more than two years after releasing APFS in 2017.

Such lack of information is blocking developers to release essential troubleshooting utilities to rebuild the directory of APFS disks, like DiskWarrior (Alsoft), TechTool Pro (Micromat) and Drive Genius (Prosoft Engineering).

What is Apple waiting for? Time to send feedback to Apple:
https://www.apple.com/feedback/macos.html

Since I cannot edit my above post, that was in relation to the recording, mainly at
43:19
44:40
45:16
45:45
where Mike Bombich warns that APFS gets corrupt and that there is no repair utility capable to repair it now, since Disk Utility fails. And as said above, DiskWarrior 6 for APFS is not yet available due to lack of documentation.

When I said "And as said above", I meant "And as said below" (since messages show in inverse chronological order).

And last, but not least, it would be great if you could also interview Rusty Little (Director of Engineering at Alsoft) to talk about APFS and DiskWarrior. That would be great! Thanks.

Today, i came across an example of DNS entries ... this example had both Google and OpenDNS entries. I tried adding OpenDNS entries to what i have now ... two Google entries.
The network performance seemed kick up a notch or two. What is going on ?
Ordinarily, i get Network Connections working and come back ten years later for a new system build. Maybe, i should have been paying more attention to this !