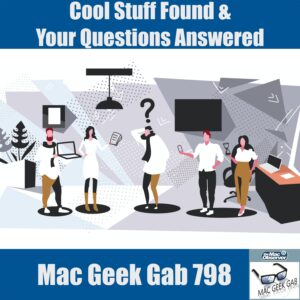 This topic was modified 4 months ago 2 times by John F. Braun
This topic is also published as an article here »
Quote

I was surprised that your advice for Charlie involved external drive solutions for all of his various disks... the new Mac Pro supposedly supports internal SATA drives with the Pegasus adapter sold via the Apple web site. It's a little pricey ($399), but it comes with a 8TB drive. He could consolidate all of his existing spinning drives onto that 8TB drive, then move his applications from the SATA SSD to the internal T2 SSD. And finally, the new Mac Pro has PCIe slots, right? Just pull the PCIe drive adapter with its NVMe SSD attached from the old Mac Pro and put it into a PCIe slot on the new Mac Pro - done!

Great point, @slholdout! We'll mention this in a follow-up episode, for sure.