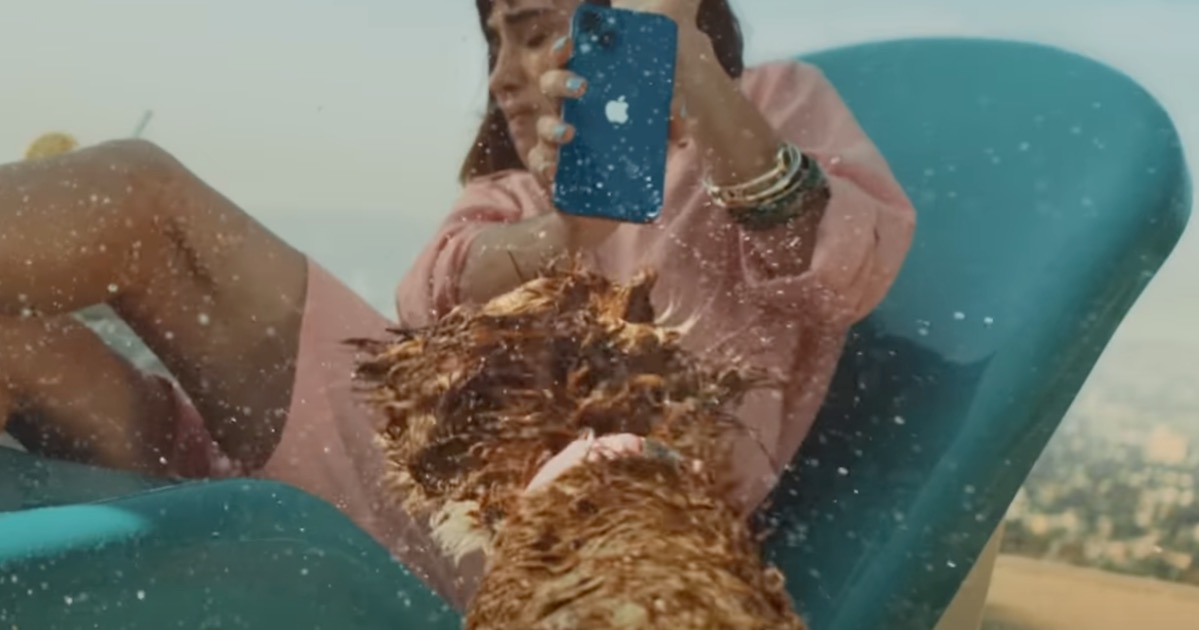 Apple has released two new video advertisements for its iPhone 13 lineup. The short ads tout the splash and shatter resistance of the iPhone 13. Available on YouTube, they show real-world scenarios that put the durability of the flagship smartphone to the test.

In one video, titled “Shake,” Apple shows how the iPhone 13 is spill and splash resistant. The iPhone 13 series has a rating of IP68 for splash, water and dust resistance. This means that under controlled laboratory conditions, the handsets were able to withstand submersion in water up to 6 meters (19.69 feet) deep for as long as 30 minutes without damage.

The video shows a woman and a dog sitting poolside. The dog jumps into the pool for a quick swim, then comes back. Like any good dog would do, the faithful companion showers the woman with the water leftover in its fur. She shields herself from the shower with her iPhone. Text on the screen reminds viewers the iPhone 13 is splash resistant. The tagline, “Relax, it’s iPhone,” ends the ad.

Showing Shatter Resistance After a Fall Off the ‘Edge’

In the other new ad, Apple demonstrates the protection its Ceramic Shield technology offers the iPhone 13. It’s a common enough situation: you leave your iPhone sitting on the table and step away. A series of messages and phone calls make the handset vibrate and wiggle its way to the edge.

Ultimately, your iPhone vibrates its way right over the edge, and it crashes to the ground. Thanks to its Ceramic Shield display, which Apple says is tougher than any smartphone glass, the device is unharmed. Once again, the video closes with the tagline, “Relax, it’s iPhone.”

Apple’s Renewed Focus On Durability: A Sign of What’s to Come?

Recently, the iPhone maker has released other advertisements showcasing the durability of its products. The latest before these two, “Hard Knocks,” showed off the durability of Apple Watch Series 7. With rumors of a new, more rugged Apple Watch coming this fall, we can’t help but wonder if these ads are just teasers for what’s yet to come in 2022.