Rumors suggest that Apple plans to launch a gaming subscription service described as a “Netflix for games.”

Step back from the gyrations of the moment, and there’s an emerging strategy for Apple: Sell fewer iPhones and assorted devices such as Macs and iWatches at a higher price than mass-market rivals, and then flood those millions of users–who have more than average disposable income because they were able to afford those devices in the first place–with apps and content that they will pay for.

I expect big improvements in Apple services in the future. Better iCloud storage, an Apple News content subscription (which I will happily pay for if it means no longer needing to visit ad tracking-riddled websites), an Apple video subscription, and more.

Even though Apple has been increasing its Services business, like apps, content, and advertising, Apple is still a hardware company.

In those markets, Apple Pay accounts for 90% of all mobile contactless payments. 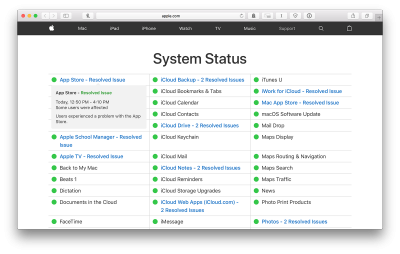 Whenever Apple’s online services go down, the company provides basic information on its System Status page. In the past it just gave information on which service was down, with a brief timeline of the outage. Now, Apple updated the page to replace the timeline with something better.