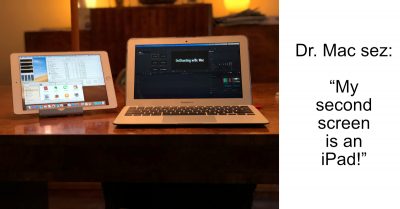 Dr. Mac recently discovered a reasonably-priced ($79) hardware/software solution called Luna Display, which lets him use his iPad as a second display for his MacBook Pro without cables, delays, or sluggishness.

Bob “Dr. Mac” LeVitus is obsessed with personal productivity on Macs and iDevices, but his pain is your gain with his tips on using two displays, even on the go.