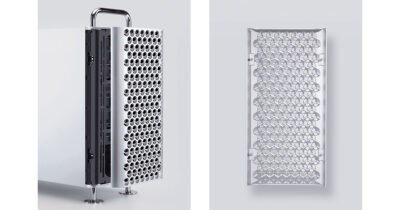 There’s a new Kickstarter project for a PC case making waves because of its similarity to Apple’s as-yet-unshipped Mac Pro. That mostly because it looks exactly like Apple’s as-yet-unshipped Mac Pro. Honestly, I’d be surprised if Apple doesn’t attempt to squash it, and I’d be only slightly less surprised if they failed to do so. In any event, this case looks like the Mac Pro, but is designed for off-the-shelf PC components. It will come with a front that looks more like Apple’s original cheese grater Mac Pro, but there’s an optional “patent pending” “noise dampener” front and back that looks like Apple’s new cheese grater. The accompanying image would be that optional front, on the left, and the accompanying back plate, on the right. There are many more pics on the rather slick website linked below. No pricing has been announced, but it launches on Kickstarter on October 21st.